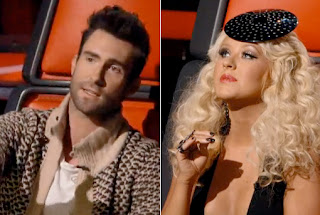 The battle rounds on The Voice have pros and cons. One of my favorite things about these episodes is getting to see the coaches actually teach the singers, and bring in other mentors as well. However, sometimes when two great performers get paired up you don’t want to see either of them go home.

Now, can we talk about the coaches! Christina’s hat! Her boobs! Adam’s sweater? There was so much going on. For the record, I dug both the weird hat and Adam’s comfy sweater. And the boobs, well, they didn’t show up for me.

Adam’s Team: Tony Lucca vs. Chris Cauley singing “Beautiful Day”
I thought this was a strong performance, though not only did I have a hard time telling who could sing better, I had a hard time telling them apart, period. Most of the coaches thought that Tony did the better job, and Adam agreed. The former Mousekateer proceeds to the next round!

Blake’s Team: RaeLynn vs. Adley Stump singing “Free Fallin'”
While Tony and Chris were more seasoned performers going head to head, Blake’s first selections saw two newbies facing off. RaeLynn got off to a terribly shaky start. When Adley came in, she was much more confident and strong. And then I thought Adley outsang RaeLynn the entire time. But RaeLynn is a miniature version of Blake’s wife, and that’s who he chose to advance.

Christina’s Team: Chris Mann vs. Monique Benabou singing “The Power of Love”
Christina is in a tough spot with a couple people on her team. Who do you pair an opera singer with? Who do you pair a rapper with? Monique is a belter, so I understand why Christina put them together. Monique started off slightly shaky, but she found her zone pretty quickly. This performance had its flaws, but I felt like it was a true duet rather than a duel. I like both of these artists, but I thought Chris came out on top and Christina made the right decision.

Cee Lo’s Team: Cheesa vs. Angie Johnson singing “Total Eclipse of the Heart”
As Cheese and Angie prepared for this song, the competitive spirit was thriving. They raised octaves to the point of not being able to hold notes and did everything possible to out-sing one another during rehearsals. Throughout the performance, I thought Angie was a shoe-in. I love the tone of her voice, and I think she showed potential. But Cee Lo is always a surprising fellow, and he advanced Cheesa to the next round. (I know they say her name “Chess-ah”, but in my mind I say it “Cheese-ah”, and I like my way better.)

Blake’s Team: Brian Fuente vs. Jordis Unga singing “Ironic”
Jordis was one of my favorite people on Rockstar INXS, and I was thrilled to see her reappear on The Voice. So even though I like Brian too, I was rooting for Jordis and was nervous her nerves would get in the way of her success. Unfortunately for Brian, he kind of blew it on stage. His part didn’t sound good at all – he sounded much stronger in rehearsals. Jordis was great though, and Blake chose her to move on. 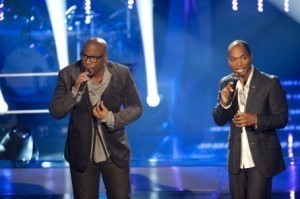 Christina’s Team: Anthony Evans vs. Jesse Campbell singing “If I Ain’t Got You”
This was a tough pairing, because both of these guys are fantastic singers. Really, I thought they were amazing. They could be in a group! It was by far the best and most professional sounding performance of the evening. Seriously? SERIOUSLY??? I can’t believe Christina had to choose between these guys. They were both SO. FREAKING. GOOD. I did not envy Christina, because I really don’t know which guy I’d choose. She chose Jesse, and I can’t fault her for that. They were both fantastic and I wish they hadn’t been competing against each other.