Yawn. Man oh man. I knew the two hour long finale of The Bachelor would be a snooze – after all, didn’t we all know Ben would choose Courtney in the end? – but I really expected the After The Final Rose show to have more juice than it did. What a bore! No Lindzi, a sedate and apologetic Courtney, a wishy-washy Ben and a needless installment with one of the franchise’s few success stories (as of yet, there’s still time), Ashley and JP.

We began with Ben strolling around picturesque Switzerland, musing about who he’ll choose as though he hadn’t already decided. Naturally, as he mentioned his “concerns” about Courtney the producers opted to show a shot of her patting a stray cat. Because she’s a harmless animal lover or because she’s a catty bitch? I choose Option #2.

Within about thirty seconds three people had leaned over railings while looking pensive, so I knew we were in for a long ride. Still, I had high hopes when Ben mentioned that his mom and sister were coming. “Yes!” I thought. “They’ll HATE Courtney and this is where the drama will come from!” No. No, that’s not how it happened. Julia, I’m disappointed in you. You seemed to skeptical when this began, I was hoping for some serious snark.

Lindzi’s visit with Ben’s family went well, of course. Did you know Lindzi “lights up the room”? I do, because that’s the ONLY WAY Ben knows how to describe her. Then he segues right into talking about how she’s not “vulnerable” enough. What’s with all the focus on vulnerability? Are you planning to stage a sneak attack? You’re falling in love, not playing Risk.

Lindzi was nervous and kept dropping her fork during dinner, but she made a good impression. How could she not? She’s the most vanilla person ever. When she got some alone time with Julia, Julia took the opportunity to warn her that Ben wants her to “open up” more, and then started grilling her about Courtney – Ben had told her that there was a girl in the house who didn’t get along with anyone else. Lindzi kept it classy (unfortunately for us) and just mused about how Courtney’s very “different” and didn’t really make an effort to be friendly. You should’ve gone for the jugular, Lindz! You have the unfortunate spelling of your name working against you, and Courtney has her terrible personality. Use what you can!

Lindzi left, and the conversation immediately turned to Courtney. Remember how she’s a model? “Beauty is only skin deep!” Ben’s mom reminded him immediately – and she was the subtle one. Julia literally groaned “She’s a model?” Later she told the confessional camera “I’m like, ‘Oh God, Ben — come on.'” You’re preachin’ to the choir, lady!

The thing is, I was never worried that Courtney would make a bad first impression with Ben’s family. A mom and a sister? No threats there. If Ben wanted to see Courtney’s true colors, he should have left her alone with a hot female friend for a while. In this setting, Courtney went full on baby voice, employing the same tactics on his mother and sister that she had on Ben. They never saw the Courtney that we did, only the one Ben foolishly fell in “love” with.

Really though, I had more hope for Julia. So you pulled Courtney aside for a quick chat on the balcony and she said she had a rough time? She admitted to a couple of mistakes? So what? That is no reason to trust or believe someone! But unfortunately, it didn’t take much to sell Julia on Courtney. Ben walked away from the family visits with permission to choose the model, and there was no going back.

It should have been cut and dry after the family visit, but Ben had one more thing to think about – himself! Choosing the villain of the season would mean rough seas ahead. America will hate him! No one will want to buy his wine! Lindzi would be the easier choice, even though he doesn’t love her. What a guy, right?

The inevitability of Ben’s choice became painfully clear during his date with Lindzi. As they spoke in the gondola, it was like Ben was forcing himself to listen to Lindzi, all the while thinking about Courtney in the back of his mind.

If Ben were a better dude, he should have just cut Lindzi loose before the rose ceremony. I might not have been the biggest Ali Fedotowsky fan (COMB YOUR HAIR!) but I respected the way she let people down. Instead of letting poor Chris (my favorite, remember him?) get all gussied up for a rose ceremony, she told him about her decision to choose the other guy as soon as she could. Much classier move than someone else we know (coughAshleycough) who let Ben get down on one knee and everything before breaking it off.

But Ben’s not a better dude, so we suffered through two dates. After a horse-drawn carriage ride and ski trip with Lindzi, Ben went for a helicopter ride and sledding with Courtney. We all knew Courtney was a lock, but when she pulled out a gift for Ben at her chalet for their nighttime date, I knew it was all over but the crying. (Of course, the crying is my favorite part.) The girl who gets the sappy gift always gets the last rose. (Probably not, but I’m too lazy to research that statement.)

Yes, “Courtney” (some poor production assistant) made Ben a scrapbook of all their best moments together. (Please tell me there was a blurred-out photo of their skinny-dipping excursion in there!) “Where did you get this?” Ben asked excitedly. Uh, really dude? Try an entire camera crew and staff? You know this whole thing has been documented all along, right?

And then came the magic words: “Talk about being vulnerable!” Ben said, with excitement I reserve only for saying thing like “Talk about a lot of cheese on these nachos!”

It wasn’t all peaches and cream, though. Before the end of the date, Courtney “annoyed” Ben by – gasp! – trying to have a conversation about how he’d ratted her out to his mom about her fraught relationship with the other girls. Again, I must ask, you know this whole thing has been documented all along, RIGHT? Ben’s family would have discovered the nasty truth eventually, whether through the aired episodes or personal experience.

If you ever have a wound and need some salt rubbed in it, might I suggest calling Neil Lane? Nothing made me happier during this whole farce than to hear the judgy jeweler say “This isn’t your first rodeo” when meeting with Ben to choose an obnoxiously large diamond ring. Oh Neil, you cad! Why not just suggest using the same one as last time? I would have.

Meanwhile, the women were spending the day trying to look thoughtful while drinking coffee and curling their hair. Oh, and putting on capes. Yes, BOTH WOMEN WORE CAPES TO THE ROSE CEREMONY. Capes! CAPES!

As the show’s resident villain Courtney, of course, wore a black dress. Also, gloves. Because who doesn’t wear gloves when a proposal might be taking place? And a white cape. Like Cruella De Vil, said everyone on the Internet. Lindzi wore a weird, feathery navy dress and a bizarre green velvet cape that looked as though it came from the costume department of Once Upon A Time. 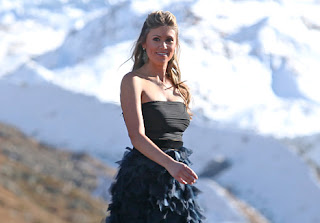 Lindzi was the first to land, getting the royal kiss-off in her royal cape. She took the news well, as though she knew it was coming. In fact, she left Ben with a sly “if things don’t work out, call me” whisper. 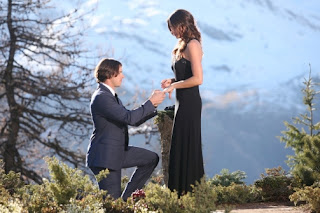 And then it was Courtney’s turn. At first, I thought perhaps Ben had come to his senses. “I want you to know that I think you’re an incredible woman. But… I… I
promised myself that I wouldn’t get down on one knee again unless I was
certain it was forever.” Oh my god, I thought! Is he actually going to suggest they date in real life??? No. No, of course he’s not. What a moron. Courtney acted surprised when Ben proposed, even though inside her head she was totally like “Winning!”

Of course, even though Ben professed to Courtney that she’s his “forever”, we knew it wouldn’t last. And that’s why I had such high hopes for the After The Final Rose Show. But instead, it was such a dud.

First Ben came out, and talked about how the woman he saw on TV wasn’t “the Courtney that I know” and how it was hard to watch. Yeah yeah, but are you still together? Not really – Ben admitted that, essentially, he and Courtney had broken up. When Chris Harrison brought up the tabloid photos of Ben kissing other women, we all expected him to pull a Ross Gellar and squeak “We were on a break!” Instead, he swore on his father’s grave that he hadn’t been kissing anyone. Old photos, misleading photos, blah blah blah. So, maybe in that first one he was going for a kiss on the cheek – I’ll give him the benefit of the doubt there. But that second shot? He’s got his hand on her ass! That is not a friendly peck goodbye, y’all. Is he alleging that it’s an old photo being passed off as something current? I guess that’s possible, since Ben has had the same haircut since he was 15 years old. If so, I hope he has a good lawyer.

Next it was Courtney’s turn for some couch time (ha! shout out to myself.) with Harrison. She was greeted by a mixture of applause (staff) and boos (actual audience members). Courtney was in full-throttle damage control mode, complete with a soft voice and bottle tears. Courtney did a great job of putting herself in the victim seat, talking about how she cried so much she couldn’t leave the house and didn’t receive anything for Valentine’s Day – not even carnations! Quick, everyone clutch your pearls! Naturally, Courtney knew the smartest move was to say she think they’re still together. Look at that model media training paying off!

Then Ben and Courtney appeared together and, miraculously, they focused much more on Ben’s transgressions than Courtney’s. Specifically, how Ben abandoned Courtney when things got rough and now she can’t completely trust him. Seriously, it’s like the girl wrote the book on how to be a manipulative girlfriend. She’s already reeling him back in with the same tactics she used while they were on the show! 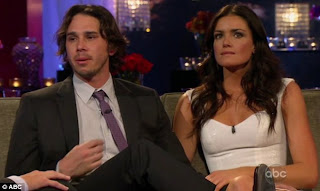 Cue a tape of all of Ben and Courtney’s best moments together! Oh come on, you knew the producers had to do something to make them tear up. Ben choked out something about how it was everything surrounding them that sucked, but not them, and then said real life is about to start. For the love of cheese, when will these people realize that you shouldn’t propose to someone before real life hits?!

Then Ashley and J.P. came out to restore some sheen to the Bachelor franchise by talking about wedding dates and baby names. Barf.

Here’s what should have happened:

OK, that’s it – and am I ever glad this one is over! Ben was not a very good bachelor, and the only person I really rooted for this season was Emily – who was way too smart and funny for Ben anyway. What did you guys think of the finale? A disappointment? Why?