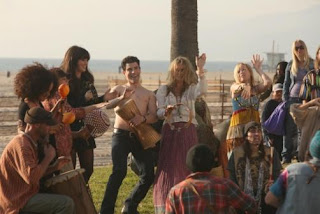 Since Max Greenfield has been the breakout star of New Girl (and I couldn’t be happier, as I’ve always had a soft spot for Deputy Leo) the show really couldn’t go wrong with an episode centered around him. “Control” was a hilarious foray into all the things that make Schmidt so special and/or crazy, and why they’re needed. Plus it featured another glimpse at Fat Schmidt, which is always a good thing.

It all began with CeCe dropping Schmidt off in a bad part of town, to avoid being seen with him yet again. Oh man, I can’t wait for the gang to find out about those two. Schmidt’s lack of control in his relationship with CeCe was almost as distressing to him as the idea of walking home in suede shoes. Schmidt. Needs. Control.

So poor Schmidtty’s nerves were already fraught when Jess brought home a new piece of furniture, something that had been on the street and – even worse – was made of pine. They argued, Jess stood her ground, and Schmidt smashed the new hutch.

Leave it to Jess to react to something like that not with anger, but with good intentions. “You have a real problem”? More like “I’m going to Google what an antique hutch costs and that’s how much you owe me.” Jess tried shock therapy first, cluttering up the apartment with found items and putting her ordinary vanilla extract right next to Schmidt’s fancy Tahitian vanilla. Oh, and Schmidt’s favorite coffee grinder? The one that “doesn’t smash up the beans like some pedestrian blade grinder. It
actually grinds them for a deeper, richer, more satisfying flavor
profile,”? Yeah, Jess used it to make homemade crayons.

Winston and Nick, however, weren’t on board with the reinvention of Schmidt. They’re super lazy, and their lives are WAY better with Schmidt around. He cooks and cleans and furnishes. But Jess wouldn’t listen to their ramblings about the apartment’s fragile ecosystem and instead took Schmidt to Venice Beach to learn how to loosen up via rollerskating and ice cream cone eating. Somehow, eventually, Schmidt went from riding a bicycle with napkins on the handlebars and showercaps (or whatever) on his feet to dancing around a drum circle, shirtless. Next thing the gang knew, Schmidt was a full-fledged hippie and the apartment was a colossal mess. 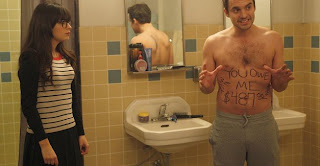 Meanwhile, Nick and Winston were in the middle of a big fight thanks to a poker debt – Nick owed Winston a bunch of money, and when Winston tried to collect Nick got all defensive. Pretty soon they were both calculating the owed costs of a lifetime of friendship. How much do you think seeing Nick’s mom’s breasts before she let herself go would cost? Oh, and there was also an epic slap fight in the middle of a supermarket. That was classy.

Eventually, the crew managed to get the old Schmidt back. Through warnings of hepatitis, the admission that they’re all lost without him, a new pair of Calvin Klein dress pants and an offer to let Schmidt clean Nick’s room. This, my friends, was “the white whale.” Schmidt was back. And so was CeCe – she broke into the apartment at 3am for some weird roleplaying with Schmidt. So who’s really in control in that relationship? Schmidtty.

What did you guys think of “Control”? I know it wasn’t the most original idea for a storyline in sitcom history, but I really liked what it brought out in the characters.