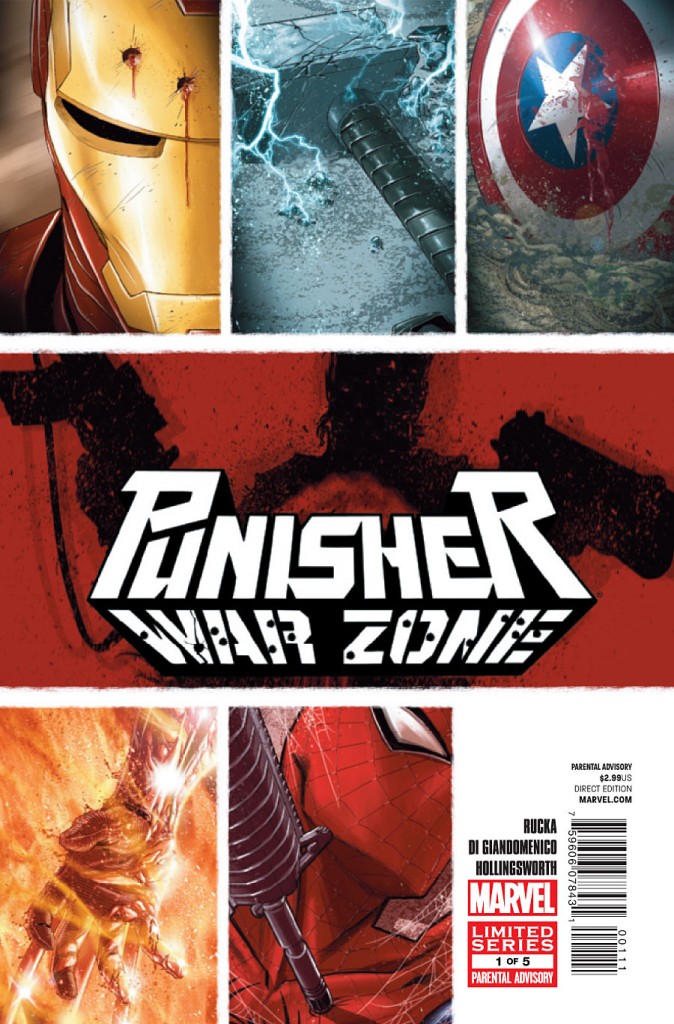 Frank Castle is in trouble.

Whether you caught the end of the last volume of the Punisher or not, the intro to this mini-series will catch you up to speed. At the end of Frank’s last harrowing crusade against crime, several police officers were killed – some by Paulsen, an agent of The Exchange crime organization, who murdered dozens of civilians and framed the Punisher for it – and another by Alves, Frank’s newest (and former) partner.

We begin with Frank on the run in Hoboken, New Jersey, figuring it’s the last place anyone would look for him.

Well, almost anyone, because as it turns out Spider-man has gotten quite good at tracking grimdark vigilantes.

See, another important detail from the last volume this one will also catch you up on is that in one of the most awesome sequences in a Punisher book in years, Frank used a pair of Spider-man’s web-shooters he acquired to sling between buildings and unleash a hail of gunfire and murder on unwitting members of The Exchange. Dirty criminals or not, these are the kinds of things Spider-man takes personally, so he’s got a bone to pick with ol’ Frankie.

There’s a fight sequence between the two, which articulates something a lot of us have probably always know to be true but never really thought about: The Punisher is just a man. And he really could not beat Spider-man in a fight. Even his punches barely phase Parker. It’s only with the help of a grenade is he able to get away (also stealing another one of Spidey’s web-shooters in the process.)

There’s a great sequence where Spider-man confronts the Avengers about something needing to be done about The Punisher, once and for all, and their initial reaction really took me out of the story: they all almost point blank ignore him.

At least with Widow and Logan I can understand them not giving any damns about the Punisher murdering crooks, but Tony, Thor and Cap brush off Peter’s concerns about the Avengers mum stance on the Punisher’s activities a little too quickly.

So he forcefully reemphasizes the point. 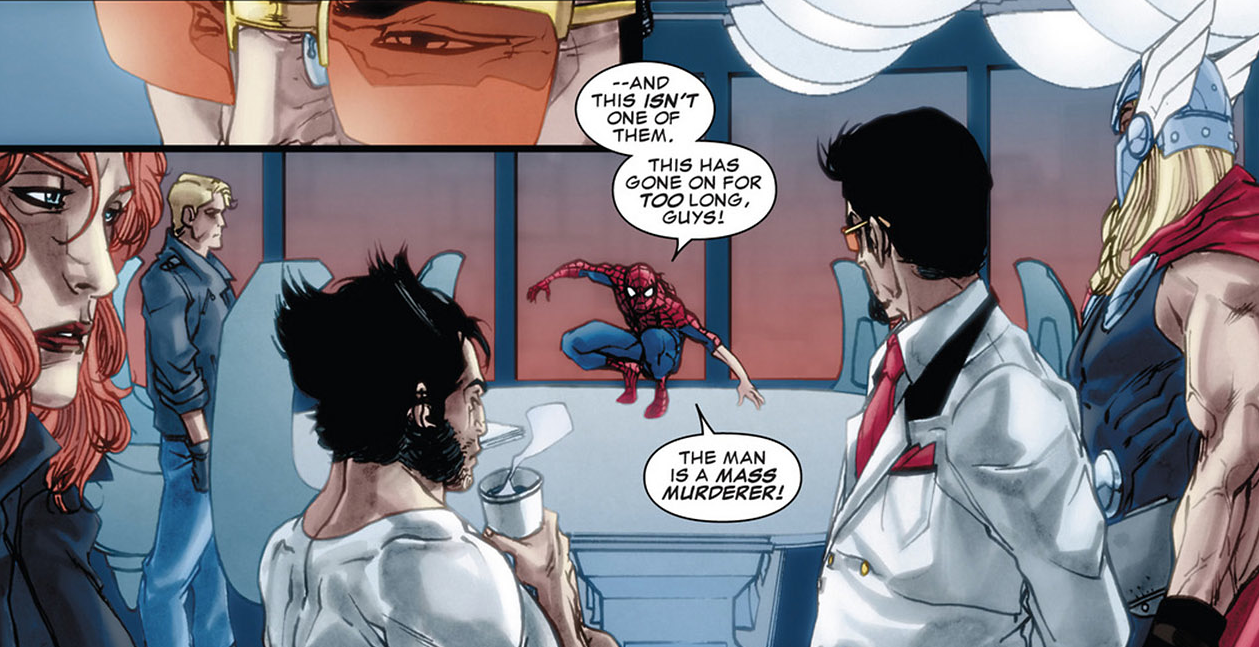 And it’s kind of telling that he even has to do this in the first place.

The Avengers seemed way more concerned about smashing their boots all over the X-men than they do about protecting the people the Punisher is murdering. Criminals or not, that’s not how justice is supposed to work.

Eventually, Cap sees Pete’s logic and decides Frank should be brought in, of course they can’t just throw him in jail, he’d enjoy that too much. Tony says he’ll find a solution (possible lead in to Frank’s place on the new Thunderbolts? Maybe.)

Of course Wolverine can’t just leave well enough alone so he goes and warns the Punisher that the Avengers are about to drop the hammer. It’s understandable why, Logan respects Frank, and he knows that the Punisher did not murder any of those innocent people (and really, this is a thing the Avengers could have Daredevil find out easily)

But now he seems to have set Frank on the warpath to defending himself agains the inevitable Avengers assault coming his way.

Overall, I think this was a nice first issue and a damn good shot at finally re-integrating the Punisher back in the mess of the Marvel Universe. Seeing him in that cross-over with Spider-man and Daredevil a few months back was nice, but I’d like to see the character brought back from the fringes he’d been at for a few years (we’re just gonna pretend he was never Frankencastle, okay?)

Final Score: 4/5 – For real, this book would’ve been perfect if not for the oddly characterized version of the Avengers we saw. Art and writing were on point otherwise and things were paced damn well.