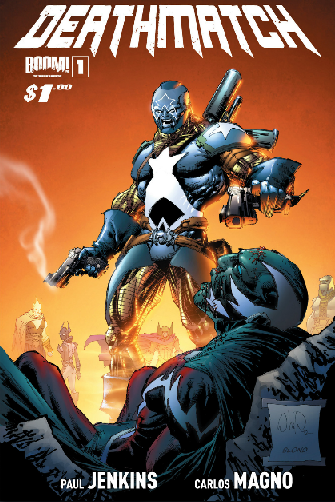 Published by: Boom!
Cover Price: $.99
Note : This review is for the digital version of the comic available from Comixology

One of the best parts of reading digital comics is that there have been quite a few digital series that are 99 cents. Granted, most of these comics tend to be about half the length of a normal comic (DC and Monkeybrain both put out quite a few books at that price and length), but for that price, it is well worth it.

In the last few weeks, a few companies have started to release full length print and digital comics at that price point. The digital weekly issues of Cerebus (which have a ton of extras) are only a buck. Cyberforce’s first few issues have been free for digital and print copies. Arcana’s Swerve has been 99 cents an issue. And Image seems to put a lot of their first issues up digitally for free or cheap very soon after release. To me, this is smart business. If a comic book is a buck or free, I am certainly willing to give it a try. I will admit, I had intended to buy Deathmatch even before I saw Paul Jenkins was writing it just because of the price.

Deathmatch seems to borrow a little from The Hunger Games by way of Secret Wars. As Boom’s press for the book says: “THE SUPERHERO BATTLE ROYALE YOU CAN’T GET FROM MARVEL OR DC! A powerful and mysterious supervillain has imprisoned the world’s greatest superheroes, forcing them to fight to the death until there is but one victor. It’s kill or be killed as we settle the score on all those hypothetical superhero match-ups in the ultimate DEATHMATCH.”

Summary (contains spoilers): This issue starts right at the aftermath of two heroes fighting to the death. A hero named Dragonfly has just killed another hero named Apex. Dragonfly has sworn never to kill and never to reveal his secret identity, but under the influence of this arena, Dragonfly has done both… 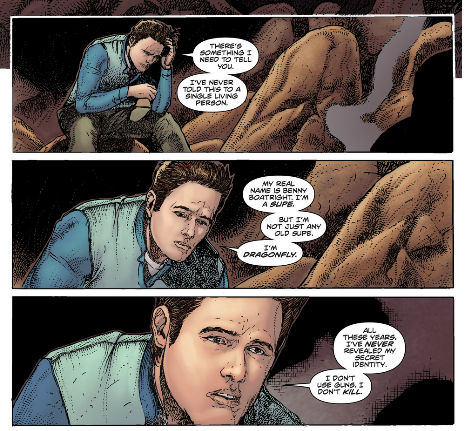 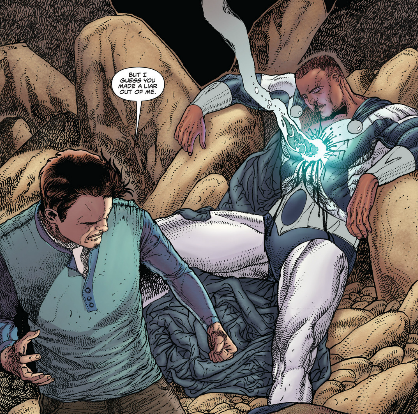 The story flashbacks some to give us some background on who Dragonfly was before all of this. Dragonfly is returned to the other heroes and villians. We find out that some powerful force has captured 32 of the most powerful heroes and villains in the world, and is pitting them in one on one fights to the death until one is left standing. The heroes and villains are all being kept under control by beings called Light Guards. One of the heroes, called The Rat, surgically removes a screwdriver hidden in his own forearm to change the rules of the game.

While two other heroes fight in the arena (a mindless hulk called Nephilim kills the woman he loves, Electronika), the Rat has managed to kill one of the Light Giards with his screwdriver. The Rat declares “there is someone behind the curtain, always someone pulling the strings. Time we pulled back.”

Review: One element that I always thought was missing from stories like The Hunger Games or Battle Royale is that you never quite understand why the characters are so willing to kill each other beyond the whole “last man standing” thing. It seems like a lot of these stories should have characters just standing around staring at each other trying to come up with the courage to kill each other. That is one of the elements that worked really well in Deathmatch, the characters involved in the fights lose their memories and moral compass, leaving them with a hell of a lot of survivor’s guilt to deal with afterwards.

I also loved how the characters react to Dragonfly outside of his superhero role.  Dragonfly has saved the world many times over, but when the other characters see how young he is, they seem to look down on him.  It was a really cool way of showing how different a hero’s life is in and out of the costume.

I’ve been a fan of Paul Jenkins since reading The Sentry, which I think is one of the best superhero stories I’ve ever read. In Deathmatch (like Sentry), he manages to boil down the real essence of superhero characters to create new characters based on familiar archetypes. Even though we don’t get a lot of time to get to know these characters in Deathmatch, Jenkins paints them with such familiar strokes, you already have a strong sense of what you are dealing with here. The relationships and emotions of these characters are raw and feel real and fleshed out.

The only real problem I had with this book was that because all the characters are new, I had a real time caring all that much when they killed each other. The characters are done really well, but as a reader, I just had no real attachment to them yet. I actually think this book would have been better served with some free digital one shots leading in to the book that gave us more of a sense of who these characters were before this story started. The reason readers care so much about who would win in a fight between Batman and Superman is because we have so much invested in the characters. I didn’t have that same investment in Apex or Dragonfly or Nephilim or Electronika. That said, I really found myself drawn to The Rat, and Dragonfly did have a pretty cool origin story.

Carlos Magno’s art was a good fit for this book. He managed to put together some really cool and unique character designs. Typically when you see a lot of “homage” style characters in a book, they all have real uninspired designs. And since most of the characters are likely just here to die in this book, that could have been an easy out here, but Magno did just the opposite. Any of these characters seems like they could fit in real nicely in a more mainstream superhero comic. 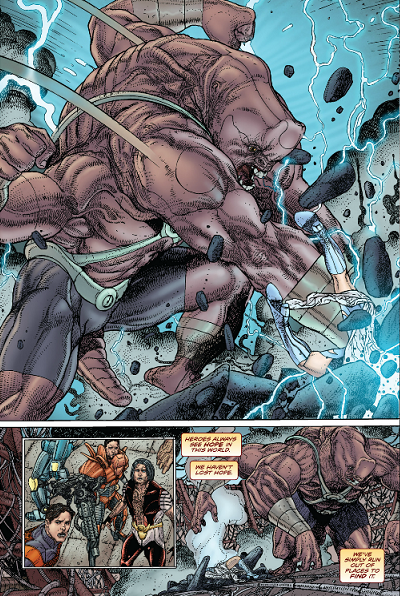 All in all, Deathmatch was a great read with great art. Definitely worth checking out, especially since the first issue was only a buck. I just hope that I feel a stronger connection to these characters quickly.

Final Score: 8.0  A solid first issue. Not the most original concept, but done with superb execution.