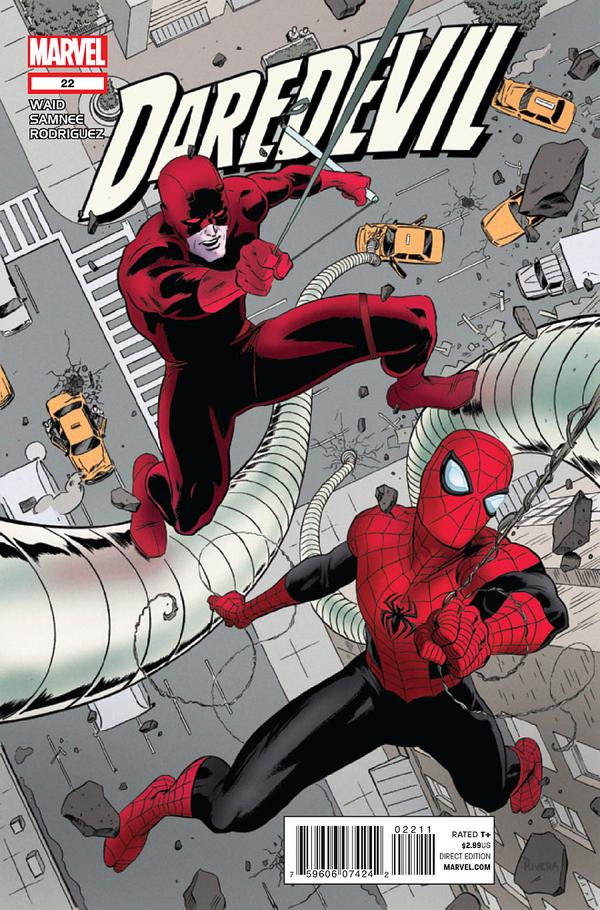 Matt discusses his challenges with identifying money and how it’s easier to just embrace technology.  However, this leads into current problems that he’s having with money as a result of not having a firm to work with.  As he is walking down a street, he is confronted by Spider-Man (Superior version) and he immediately notices some different characteristics with him (which is nice considering a lot of other people are blind to it).  There is a timely interruption that forces them to abandon their upcoming fight as they work together to stop an old foe.  They manage to stop the threat by working as a team.  Matt mentions the recent events of his life and they decide that things are cool between them.  Afterwards Matt goes to Ma & Pa Bakery to find a peace offering for Foggy.  Matt has an honest discussion with Foggy, which leads to a startling revelation from Foggy.

This is the sole Marvel book that I’m reading right now.  Long story short, AvX pushed me away from the company for the time being, but one book that I could not walk away from was Daredevil.  The book is fantastic and there has not been a single issue that I have not enjoyed.  The issues that he has with technology making it harder for him to recognize bills, having to deal with dishonest business owners, deciding to use a debit card, were all really good issues that Matt (not Daredevil) has to deal with on a daily basis.  Waid always brings these aspects of his life into the story and make it much stronger as a result of doing so.  Matt “getting even” with the crooked business owner was so subtle and so much in character.  The rest of the issue could have been a total suckfest and I still would have enjoyed the comic overall based on the first three pages.  Matt is broke and exploits his conflict with not being Daredevil to get a free meal, which was another funny and great touch to the story.  If these issues had come out five years ago, Matt would’ve been “darkly” eating rats in an alley and then would’ve resorted to “darkly” stealing money to solve being broke…either that or getting the Hand to carry out his dastardly deeds.  I jest, but I would not have been surprised to read that happening back then.  He’s going through some issues and rather than being all gloom and doom it’s actually a relatable story instead.  Daredevil calling out Spider-Man for his irregular characteristics was good as it showed their history and chemistry together.  I also liked how Daredevil used his abilities to scan Spider-Man just to make sure he was the real one.  It was also hilarious when he was cutting down Doc Ock while infuriating Spider-Man.  Also, Mark Waid is officially my favorite superhero comic writer as of this issue.  Only he could use this particular villain twice so far in a run and not make it lame.  The re-use of this villain actually fit in quite well with the story between Daredevil and Spider-Man.  There was even more goodness in this issue, but the real highlight came at the end with Matt and Foggy.  The revelation was startling and it went beyond Matt’s abilities as Daredevil.  Even before that, Matt made some confessions that goes back to possibly resolving the concerns Foggy had at the end of the first issue.  They’re having this pretty serious discussion while Foggy’s face is covered in cheesecake was another great touch.  The end of the book was both funny and touching at the same time.  The art by Samnee continues to be perfect for this title and Rodriguez’s colours do a great job of complementing it.  This title continues to bring the awesome.

Buy It.  This book is just so damn good.  It’s fun and it brings back older elements to superhero storytelling without making it seem antiquated or corny.  This is simply a great title and I have to give this my highest recommendation.  This has managed to bring back the classic elements of Matt/Daredevil without retconning the last decade (which I wouldn’t have minded for the most part).  This is what makes a writer great, he uses what he was given and manages to make it his own while placing his own unique spin on it.  This takes skill because he avoided the lazy and common practice of the retcon or just ignoring established history.  Waid has done the seemingly impossible and made Daredevil relevant and relatable once again without erasing the past decade of darkness.