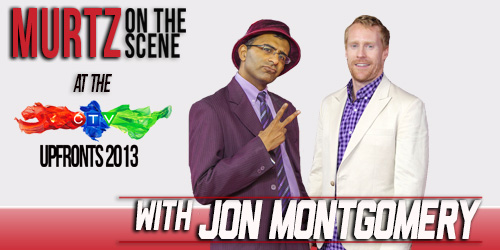 When CTV first announced that there would be a Canadian version of The Amazing Race, the initial reaction many had was that it was a long time coming.

My reaction was that it was simply a response to the unequivocal success that Shaw Media has with its Northern Big Brother and I remained equally skeptical that the show would work when it was announced that the teams would be traveling only across Canada. I believe that the allure of The Amazing Race has always been the international destinations and the language barriers that Americans must face when attempt to choose between detours to complete and roadblocks to get past.

With that being said, my opinion started to change when the series announced its host at its Upfront 2013 presentation in June. While I expected the show to continue the trend of recycling its faces from other programs (Ben Mulroney for Canadian Idol and Leah Miller for So You Think You Can Dance Canada), I was pleasantly surprised to learn that The Amazing Race Canada had gone in a completely different direction and elected Olympian, Jon Montgomery as its host. While I was almost positive that it was going to be Seamus O’Reagan, formerly of Canada AM, I was pleasantly surprised to learn that CTV and Insight Productions went with a Canadian hero, best known for sipping beer through the streets of Whistler after winning the gold medal three years ago instead of someone that we had already seen in front of the camera.

I also like the idea of Montgomery playing a more active role during his duties as the host of the show. He will apparently use his athleticism to demonstrate the risks involved and the skills that are require for some of the challenges that await the racers.

At the aforementioned CTV Upfront, I had the chance to talk to both Montgomery and the show’s executive producer John Brunton about the series [SEE VIDEO ABOVE]. I asked the pair how Canadian the show would end up being and if there would be Canadian stereotypes laced throughout the program. I also caught up with Montgomery on the red carpet and we discussed many aspects of the show in an open discussion.