Box Office: The Butler Serves Up A Can Of Whoop Ass To Kick-Ass 2, Claims Weekend 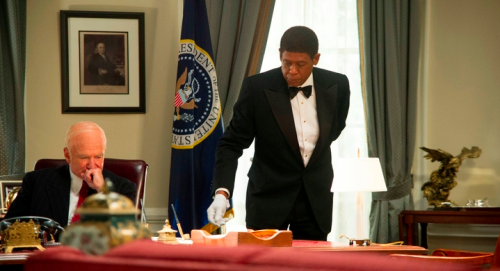 Okay, let’s get something straight. There were a number of factors that played into The Butler being the #1 film of the weekend. And not all of them have to do with the film itself. While it was a film I think a number were interested in seeing, The Butler seemed to become the back story during the publicity tour as it was Oprah Winfrey that became the headline grabber due to an incident in a Switzerland clothing boutique. That’s a story that made its way to the mainstream. Months prior Hollywood mogul Harvey Weinstein was engaged in a pissing contest with the suits at Warner Bros. that complained they had reserved the right to the original tittle based on a 1916 short from the studio. Yeah, because Joe Six-Pack really cares about movies with the same name. Well, unless it’s The Avengers. “Hey, The Avengers is on everybody! Oh, it’s the crappy TV-to-screen adaptation with Uma Thurman and Ralph Fiennes. Never mind.

So instead of The Butler the title became Lee Daniels’ The Butler. Such a decision to re-title it this comes off as pompous and arrogant. Though, I don’t know why filmmakers like Tyler Perry and John Carpenter have to have their names preceding the titles of their films. I’d be interested to know if there were any other finalists for the name change. Yes, Sir, Mr. President, perhaps? Probably not. While Daniels did direct and produce, the film was written by Emmy-winner Danny Strong (Game Change, Recount). At least in the case of Perry and Carpenter, their names at the front of the title has them in a writer/producer/director capacity.

Finishing with an estimated $25 million, The Butler easily took the weekend. As pretentious and maudlin it may be, it’ll likely be one of those that’ll get recognized with Oscar nominations, despite it coming off as Oscar bait more than anything else. It makes Paul Haggis’ Crash look like Spike Lee’s Do the Right Thing. Granted, Forest Whitaker shines in his role, but he was better in The Last King of Scotland and in Clint Eastwood’s Bird, two films where he played real-life people. The basis for his character in The Butler was inspired by longtime White House butler/maître d’ Eugene Allen, rechristened as Cecil Gaines in Strong’s fictionalized screenplay.

In all likelihood, The Butler will enjoy similar success to 2011’s The Help. The release timetable is just about right, and The Weinsteins will look to get this one into homes for the holidays. With the field being wide for Best Picture nominees it wouldn’t surprise me if The Butler gets in along with Forest Whitaker and Oprah Winfrey. It’s a “safe” pick, the same as The Help and The Blind Side.

When the original Kick-Ass came out in 2010, it was distributed by Lionsgate and had a Spring release. Now the releasing studio is Universal Studios, the same studio that also released Guillermo Del Toro’s Hellboy II: The Golden Army after Columbia Pictures wouldn’t greenlight the sequel. And instead of spring, Kick-Ass 2 gets a Dog Days of Summer release in mid- to late-August. Anyone expecting the sequel would trump the numbers of the original would be like Billy Madison and be diagnosed with a case of “loser denial.” For one thing it didn’t have Matthew Vaughn behind the camera. That honor went to Jeff Wadlow, who also wrote the screen adaptation of Mark Millar’s successful comic riff of the ideal superhero. It finished with $13.5 million. That wasn’t enough to finish the weekend in second. Or third. Actually, it may slip up to #3 if Elysium‘s third-place estimates come in lower than expected.

Kick-ass was kick-ass. The sequel? Not so much.

On the potential of a Kick-Ass 3: Considering that the sequel will have a huge drop-off the weekend upcoming, unless it overachieves overseas or on home video, don’t expect a Kick-Ass 3. Besides, its two stars (Aaron Taylor-Johnson and Chloe Grace Moretz) are fielding better offers, from starring in a remake based on one of Stephen King’s best novels to suiting up for Joss Whedon’s Avengers sequel.

The only other big new release in the market place to make it in the Top Ten was Open Road’s Steve Jobs’ biopic Jobs. Fronted by Ashton Kutcher in the title role, the film had the misfortune of its subject matter. It was neither compelling to watch nor was it pleasing. At least to me. All it did was drive home the point over and over again at how insolent Steve Jobs was to his friends and his employees. The scatterbrained screenplay didn’t help either.

If you were wondering about that thriller Paranoia featuring a bald Harrison Ford, Gary Oldman and Liam Hemsworth, well it became the worst opening wide release of the summer finishing at #13 with $3.5 million. To compare, Paranoia was in 2,459 theaters with a per-theater average of $1,423. Woody Allen’s Blue Jasmine, which finished at #14 with $2.35 million, played in 229 theaters with a per-theater average of $10,301. That PTA was also the biggest PTA of films ranked in the Top 20, beating The Butler by nearly 2k.

In other small release news, A24’s The Spectacular Now expanded from 19 to 55 theaters and saw its attendance jump 57%. It finished the weekend with $419k. And IFC Films’ Ain’t Them Bodies Saints, starring Casey Affleck and Rooney Mara, opened in three theaters and earned $28.8k.

On tap for this week we have The Mortal Instruments: City of Bones, where Columbia Pictures tries to launch to successfully launch a franchise, on Wednesday, followed by the home invasion horrorfest You’re Next and the final entry in the Cornetto Trilogy, The World’s End (following Shaun of the Dead and Hot Fuzz) opening wide on Friday.