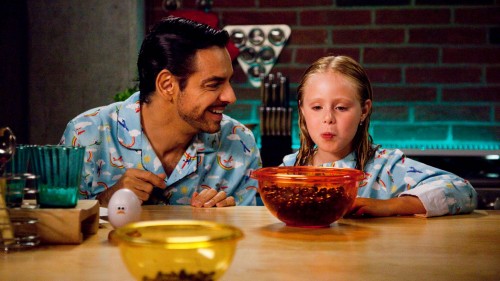 This movie was #5 in this week’s Top 10. Can anybody name it without cheating?

Okay this box office recap will be a little on the short side. I figure if Hollywood can’t deliver entertaining films on a holiday weekend, then I respond in similar fashion. Though I will have far greater wit and repartee. Labor Day weekend typically signals the end of summer. I may be in the minority but I was underwhelmed by a majority of movies this summer. The stuff I liked the most was either stuff I had already seen back in March (Before Sunset, 20 Feet From Stardom, The Spectacular Now, Prince Avalanche) or fall into a your mileage may vary in terms of enjoyment (Big movies: Fast & Furious 6, Man of Steel, This Is the End, Pacific Rim; and small movies: The Kings of Summer, The Way, Way Back, The World’s End, The Conjuring, Ain’t Them Bodies Saints).

The summer also gave us a large number of sequels, prequels, remakes, reboots and franchise starters (yes, I’m looking at you Jerry Bruckheimer and your The Lone Ranger). And Bombs. R.I.P.D. (awful), The Internship (A PG-13 Wedding Crashers/Google University mash-up? Ugh.), White House Down (more like White House Don’t Bother), Paranoia (Was this even in theaters? I’m being serious.)

So for the last week of the summer season, what do we get for our troubles? How about a new documentary from Morgan Spurlock, plus Ethan Hawke pretending to be like Sandra Bullock in that classic action movie “The Bus That Can’t Slow Down,” and a big surprise that caused a big shake-up in the middle of the Top 10.

Okay, let’s see where this takes us. When I say Morgan Spurlock, most think of Super Size Me. Well, this time he super-sized the popular boy band group One Direction with the concert documentary One Direction: This Is Us. Yes, the same Morgan Spurlock. Don’t look shocked; a few years ago he showed how it easy it was to be a “sell-out,” or at least sell your movie to different advertisers with POM Wonderful Presents: The Greatest Movie Ever Sold. One Direction was the #1 film Friday-Sunday with an estimated $15.8 million.

Unfortunately, it wasn’t the top winner Friday-Monday for Labor Day weekend. That honor goes to the film that has been #1 the previous two weeks – Lee Daniels’ The Butler. The Civil Rights drama took in an estimated $20 million over four days to claim the top spot this holiday weekend. Now playing on 3,300 screens, The Butler still maintains a strong PTA of $6,009. It’s domestic total is now at $79 million and should make it to the century mark over the next two weeks.

The biggest shocker of the weekend was the performance of Lionsgate’s Spanish language comedy Instructions Not Included. Playing on 374 screens, the film had the largest PTA of any film currently in theaters (big or small release) with $28,818. It finished the weekend with $10 million, placing it in between Disney’s Planes and Neil Blomkamp’s follow-up to District 9, Elysium. I vaguely recall seeing a trailer before some movie, but most looking at the top 10 will be baffled by its performance. This is just another example how certain segments of the population will go out in droves to see certain movies if studios would go ahead and release them. Methinks Lionsgate was pushing this one hard on channels like Univision and Telemundo.

To put it in perspective, Instructions Not Included easily beat out the highly touted Getaway (touted in terms of recognizable names and faces) which got a death summons with a 2% aggregate score on Rotten Tomatoes. It made just $5.5 million in 2,130 theaters.

Other new releases that didn’t fare to well include the Wednesday release of Focus Features’ Closed Circuit, a Brit legal thriller starring Eric Bana and Rebecca Hall. I saw it and it was a total bore with useless scenes and the principle leads acting surprised at who was going to be a surprise witness in giving testimony. Some lawyers they are. One of them even interviewed the surprise witness in what looked to be a safe house with video surveillance. Hmmm, why would the witness need to be in a safe house with surveillance? I wonder. Anyway, the film brought in an estimated $2.5 million Friday-Sunday on 870 screens. Just below that was Wong Kar-Wai’s The Grandmaster, which expanded into 749 theaters this weekend and brought home $2.4 million over three days.

Looking to the Fall movie season we begin this weekend with Riddick featuring Vin Diesel. It will run the weekend as the only new wide release. I have my doubts on whether or not Riddick can capture some of the magic that made the original Pitch Black a cult hit on home video. But then again, Pitch Black found its fans on video. For Universal’s sake hopefully fans of the original, and a lesser extent the sequel (The Chronicles of Riddick) will be there opening weekend.