After reviewing so many Autobots I almost forgot there was another faction. We start reviewing Fall of Cybertron Decepticons with one of the most popular TF characters of all time, at the same level of Optimus Prime, Megatron, Starscream and Bumblebee but much, much cooler. Please welcome War for Cybertron Soundwave, from the 2010 Generations line! 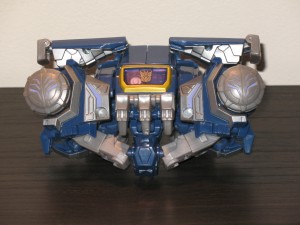 WfC/FoC Soundwave transforms into a Cybertronian Boombox. Hohoho, who am I kidding. The picture above represents a popular fanmode which desperately tries to capture the G1 version of the character. Unfortunately our cassette-spitting ‘Con has long lost music-themed alt modes in favour of boring vehicle modes, starting with its stealth plane mode in Cybertron/Galaxy Force. In War for Cybertron we got this: 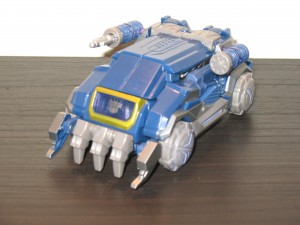 Basically, we are looking at a blue box with fancy wheels and… claws instead of a bumper? Wait, there’s Soundwave’s signature chest panel there, we are cool! Despite the departure from the G1 alternate mode, Soundwave’s vehicle mode looks good, rolls nicely and comes with two optional weapons that can be mounted on the car’s sides. They should be familiar to older fans.

Lose yourself to dance

Soundwave’s articulation is simply outstanding: ankles, knees, hips, shoulders, elbows, wrists, neck, everything you might want is there, except for the waist joint, which is sorely missing. 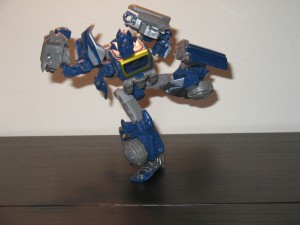 In this case there’s no real damage to poseability, also because Soundwave has never been the athletic type, he mostly spent his time standing in a corner giving orders. 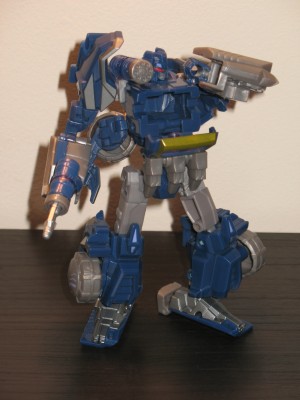 Unfortunately there are no cassettes for Soundwave to boss around: Laserbeak, Ravage and friends have been released as Legends class toys for a later version of this same toy, a Voyager class Soundwave that is so badly out of scale with everything else that I am staying away from it. You know, sometimes you have to make sacrifices. As a bonus gimmick, Soundwave’s signature weapons can be store in its chest, vaguely resembling batteries. 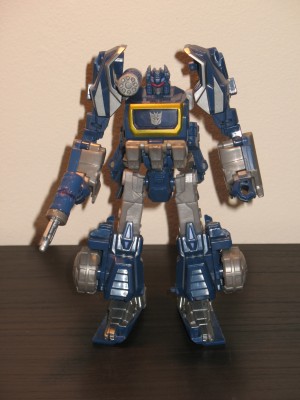 We started reviewing Decepticons on a high note: War for Cybertron/Fall of Cybertron Soundwave is one of the best Transformers toys EVER, with a simple and cool alt mode, inoffensive gimmicks and an awesome, highly articulated robot mode which manages to represent very well the G1 character. We also get a bonus boombox fanmode, what more could you ask? I highly recommend purchasing War for Cybertron Soundwave: even if don’t collect Transformers, after this you will.

WWE Hall Of Famer Jeff Jarrett Is All Elite With AEW In The Ring & In The Office!

AEW Dynamite 8/24/22 Sees All Out 2022 AEW Women’s Championship Match Cancelled With Interim Champion To Be Crowned!