The Marx Brothers remain icons of comedy thanks to the mayhem they brought to cinema. Towards the end of their careers, the brothers brought the same insanity to television. Groucho hosted You Bet Your Life for several seasons, but they also had fun appearing on other shows. Shout! Factory’s The Marx Brothers TV Collection promises to be an archival treasure trove of appearances from Groucho, Harpo and Chico. This is a historical tour of TV that will brighten the day of anyone who knows the secret word. Here’s the press release from Shout! Factory: 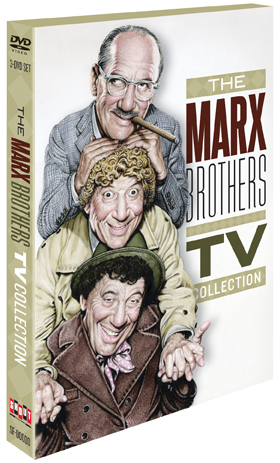 Los Angeles, CA – Adding to the celebration of the 100th anniversary of The Marx Brothers’ nicknames—today!–Shout! Factory announces the August 12 release of The Marx Brothers TV Collection, the first set of its kind dedicated to the comedic trio. The set features more than 50 performances on TV programs including The GE Theater, The DuPont Show with June Allyson, The Jack Benny Program, The Jackie Gleason Show, The Colgate Comedy Hour, The Dick Cavett Show, All Star Revue, The Dinah Shore Chevy Show, The Kraft Music Hall, The Red Skelton Hour, The RCA Victor Show, The Perry Como Show, The Arthur Murray Party, Championship Bridge, Celebrity Golf, Celebrity Billiards and many, many more, all here on DVD – with many not seen anywhere in decades. The collection also features a 40-page book with rare photos from the Marx Brothers family archive, program notes and an essay by Marx Brothers historian Robert S. Bader.

As Bader writes in the essay, “the Marx Brothers became entertainment icons through a long and brilliant career on vaudeville and Broadway stages, and they sealed their immortality in a string of celebrated feature films. Nearly 50 years into their careers, the new medium of television provided them with unprecedented exposure — which meant, of course, an opportunity to bring laughter to millions of people all at once. For the next 20 years, the Marx Brothers’ appearances on television — individually and together — included sitcoms, game shows, variety programs and even the occasional drama.

“Television was like a fountain of youth for the Marx Brothers — and they discovered it in front of the largest audience they’d ever had. Groucho, Harpo and Chico had come full circle. They had arrived on America’s vaudeville stages, and said farewell by invading its living rooms.

“The Marx Brothers TV Collection presents a broad and genuinely rare array of television work from the comedy legends, who still had plenty of laughs left in them after the movies. For Marx Brothers fans — and fans of comedy in general — this is truly must–see TV.”

AEW Dynamite 8/24/22 Sees All Out 2022 AEW Women’s Championship Match Cancelled With Interim Champion To Be Crowned!