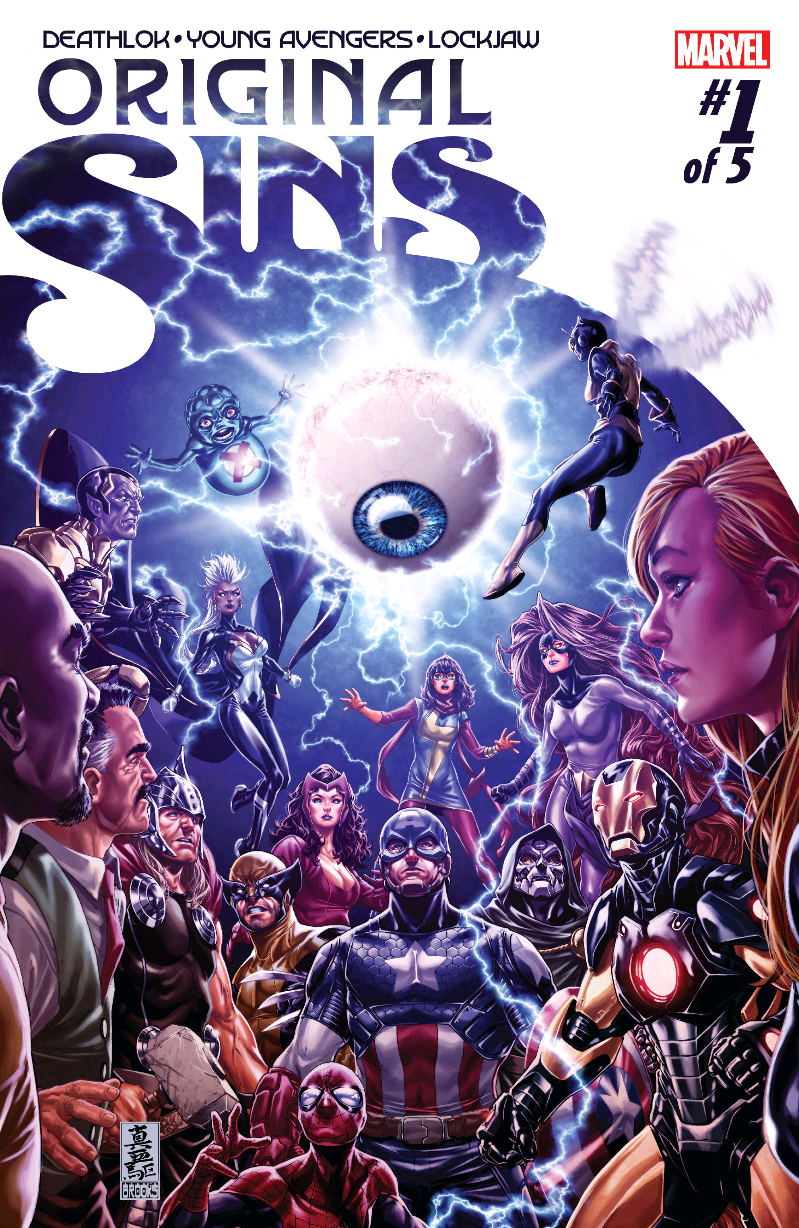 Just a quick note: Original Sins is an anthology book set during the Original Sin crossover. It is real easy to get this confused with the main series (which is Original Sin, not Sins).

Summary (contains spoilers): Terminus starts with a wounded vet, Henry Hayes, walking through Grand Central Station in New York City. An off-duty SHIELD Agent, Seth Horne, approaches him and says, “I know who you are. I know what you do.” Agent Horne was there when the Watcher’s eye exploded and it revealed to him that Henry was a cybernetic soldier assassin named Deathlok and SHIELD wants to recruit him! 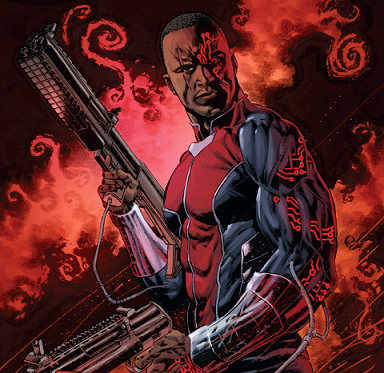 Hayes doesn’t remember any of this because they wipe his memory after each assignment. Hayes thinks Horne is just some kind of nut job. As Hayes walks away, he glances up at the train schedule an a message appears, activating him to terminate Agent Horne for knowing too much. He does the job, and then gets on a train to go see his daughter for dinner. To Be Continued in Deathlok #1 in October.

Review: It was hard not to think of Agents of SHIELD reading this issue. The pilot episode featured a character who would later become Deathlok in the show, and the climax of the pilot episode takes place in a train station (in Los Angeles, not New York, if I recall correctly).

I thought that image I posted above was a real cool look for Deathlok. I hope they go with that, and not the classic Deathlok costume in his upcoming series. 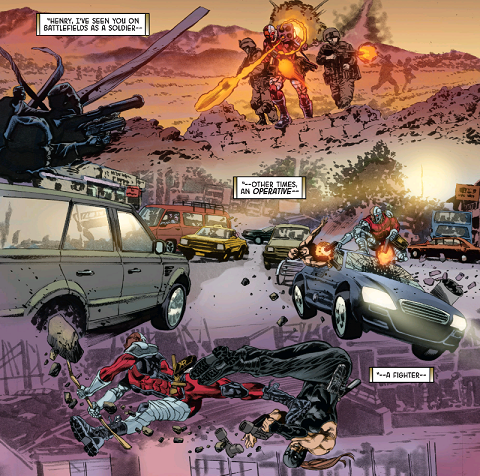 Of the three stories in this comic, I definitely thought this was the strongest. The premise and execution was perfect for a little glimpse into a hidden corner of the Marvel universe.  This was the first comic I had read where the Secret Bomb led to the types of stories I was hoping to see.

If this is any indication of what Nathan Edmundson and Mike Perkins will do with a Deathlok series, I will definitely be checking that series out.

Summary (contains spoilers): Hulkling is walking through Brooklyn and sees all the heroes fighting Orb and company in Manhattan.  Prodigy and Hulkling head up to Marvel Boy’s space station to tell him that Exterminatrix (one of Marvel Boy’s Evil Exes) is working with Orb. Marvel Boy agrees to help them. In order to get close to the scene, Hulking shapeshifts to resemble Agent Coulson, and flirts with a SHIELD soldier to get clearance.

As they approach, a crazy woman starts yelling at them: 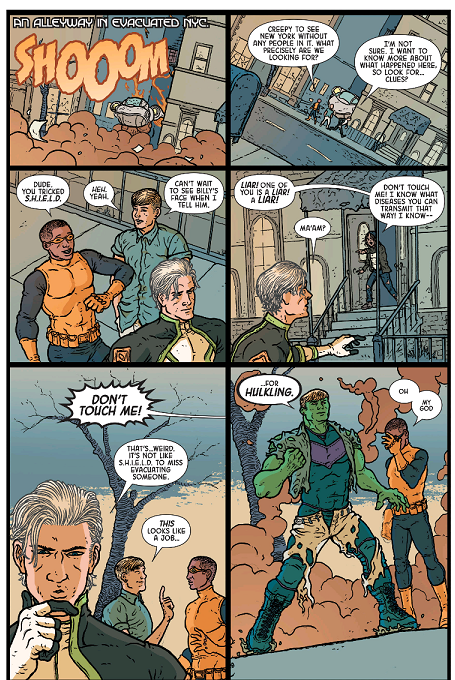 They decide to investigate. In her house, they find a mess and they can’t find the woman. They are ambushed by The Hood, who says he has work for them, “And I just can’t take no for an answer.” Something creepy happens in the last panel which I have no idea, what it was… 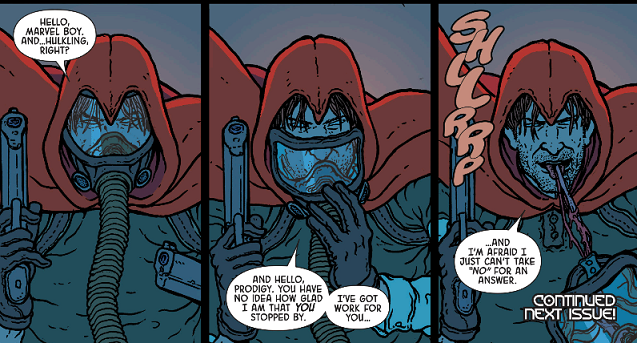 Review: This was the story I was most looking forward to in Original Sins, so it felt like a bit of a letdown. No offense to Ryan North, but I don’t think anyone outside of Allan Heinberg and Kieron Gillen has done all that well with the Young Avengers characters…and even Heinberg and Gillen were often hit and miss.

Too much of the issue just felt like filler…A fight! Let’s go get Marvel Boy! Okay, we got clearance to join the fight…but we will land blocks away and walk over…just to get ambushed by The Hood.  It seems like there could have been a more direct and engaging way to tell this same story.

I also thought the art just looked off. Sort of like they were trying to emulate Mike Allred’s “gritty cartoon” style he did so well in Madman and X-Statix, but falling short.

I know I came off harsh on this story, but it does to be one of the cornerstone of this anthology, and like I said, I was looking forward to it.

Summary (contains spoilers): This was just a quick cartoony two page story.  The Watcher’s Eye explodes and reminds Lockjaw of a secret he had forgotten. He goes off to find a hero to help him…but Captain America, Luke Cage, Ms Marvel, Emma Frost, Black Panther, Spider-Man, and Human Torch are all too busy.

He finally gets Iron Man to go to the moon with him. Lockjaw points to a specific spot. Stark blasts it, and Lockjaw digs up a massive bone he had buried there. 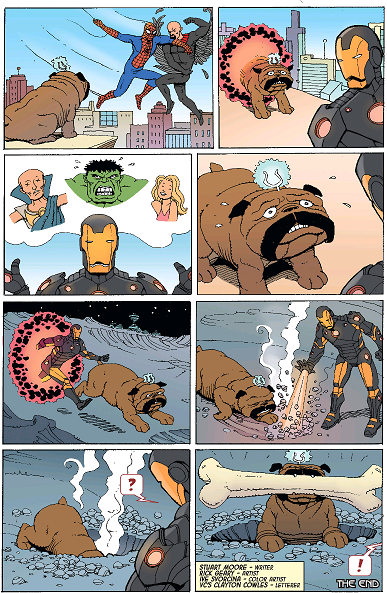 Review: Not really much to say about this. It was a cute little story. Fun idea, and the art worked well for it.  Marvel needs more short strips like this.  They are always fun and always add to the value of a comic to me.

Overall: I do want to say that I loved the cover of this issue. I love a big massive shot with a lot of heroes, and Mark Brooks did a beautiful job with this one. I especially love that Ms Marvel and Doop were right in the middle of the action.

Like most anthology comics, this one was hit or miss. I did like the format (two stand alone stories and one story that will continue through the series). It reminded me of the old Marvel Comics Present series. I didn’t always love each story in that comic, but it gave me a wide exposure to a lot of the Marvel Universe.

There was nothing outright bad about any of the stories here, but I do think the Young Avengers one could have been far better. Marvel needs to do a better job making their “new IP’s” viable. I am tired of X-Men, Spider-Man, Iron Man, Hulk, etc. Give the fresh blood a shot, but that requires matching up a strong creative team on it. You know what I would have loved to see? G. Willow Wilson doing a Young Avengers story!

And I am amazed we got a Marvel anthology book without any sign of Wolverine! Not sure if that has even happened before!

All in all, I enjoyed Original Sins and will be checking out the rest of the series, and I will probably be buying Deathlok too. So, this book succeeded as a promotional tool, but maybe not so much as a work of art in it’s own right.

Final Score: 7.0: Dragged down slightly by the Young Avengers story (which will be continuing), but the Lockjaw and Deathlok stories were good.