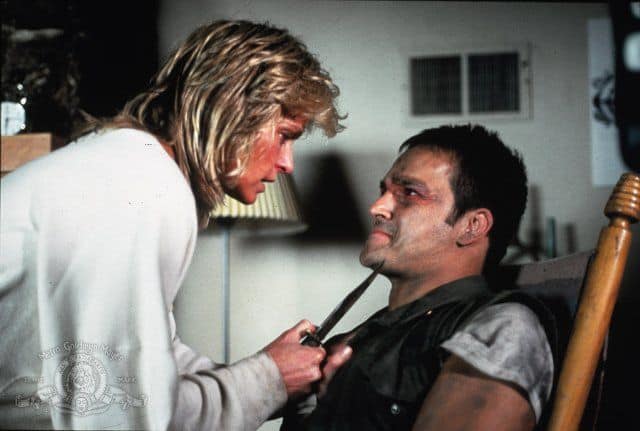 Olive Films is re-issuing cult films on Blu-ray to bring extra resolution to titles that deserve a deeper look. The following four releases represent the end of the line for a comedy duo, the visualization of a classic folk song, an adaption of a Broadway play that gave revamped to an actress’ career and a movie that has nothing to do with Jack Kerouac.

Dance With Me Henry! was the final movie for Bud Abbott and Lou Costello. The comic duo had just ended their relationship with Universal after Abbot and Costello Meet the Mummy. They picked a rather unusual script from a time when Hollywood didn’t have test screenings and market research to alter the tone of a project. Costello runs a children’s amusement park called Kiddyland. He’s also adopted a few kids without having a wife. Abbott is Bud’s pal who also has a serious gambling problem. He owes a mobster $10,000 when that was a lot of money. He works out a deal to wipe out the debt if Lou agrees to launder a small fortune of ill gotten gains. As usual, the deal goes bad. Although for a comedy, it goes extremely bad. One the boys is suspected of murder. The neighborhood kids have to come to the rescue in the finale that includes plenty of firearms. The true comedy of Dance With Me Henry comes from pondering how they were allowed to mix mobsters and orphans without being covered in a pile of studio notes. For a final project, the duo aren’t doing a swansong performance. Almost seems like there ought to be another Abbott and Costello flick. But this would be their 36th and final cinematic performance together. At some point they probably would have reunited except that Lou Costello would die a few years later.

The Beat Generation is not a documentary about Jack Keroauc, Allen Ginsburg and William S. Burroughs. If you watch this film as a short cut on an English term paper about the literary movement, you’re getting an “F.” The Beat writers embraced the movies. And yet, filmamkers of the ’50s and ’60s weren’t too kind to the writers that took to the road. Sadly when they got a name in the press, the Beats became a target of ridicule for Hollywood. They were reduced down to beret wearing, goatee swinging, bongo play, poetry spouters. The movie seems to star Ray Danton as a Beat kinda guy. He loves to act like he stepped out of a Grove paperback cover. He’s got a touch of nihilism to his attitude. He’s got a bit of a problem since he’s also a violent rapist. He picks a victim that’s a police detective’s wife. After the attack, Francee (Fay Spain) finds out that she’s pregnant, but she’s not sure if the baby belongs to her husband or the rapist. The Beat element comes into play with a nightclub full of stereotypical beatniks. It’s easy to see why Keroauc and his pals weren’t thrilled by getting named in the press. While it would be easy to think the Beats would hate the film, they had to be impressed that jazz legend and musical genius Louis Armstrong sang the title song about them. Sadly the song mocked them. This would not be as cool as Richard Hell’s “Blank Generation.” Once you get away from the whole Beat element, the movie is extremely twisted. Finally the detective goes after the rapist while his wife must decide who’s the daddy in the era before Maury. The transfer brings out the glory of black and white film in 2.35:1 anamorphic.

Alice’s Restaurant brings visuals to Arlo Guthrie’s masterwork. Most movies merely use a song title or do their best to stretch out a 3 minute pop story into a 2 hour film. Arlo’s “Alice’s Restaurant Massacree” is nearly 20 minutes long so it fit well in a 111 minute film. Like the song, the movie seems a semi-fictionalized version of Arlo’s life and a Thanksgiving party that went bad. Around here, the classic rock radio stations break out the marathon track right before the holiday as part of fundraisers for food banks. Now you can see the tale of how a man’s way to overcome a locked dump turned out to be a bad move. Director Arthur Penn was still hot from Bonnie and Clyde. With Alice he dealt with an outlaw that was truly a rather innocent guy. The movie was released in 1969 so there’s a real feel to the hippie lifestyle shown on the screen. This isn’t a recreated bygone day with the props. Arlo is doing his best to avoid being drafted. He’s also dealing with his father slowly dying in a hospital. He ends up splitting school and hitting the road. He finds himself hanging with a hippie commune in Stockbridge, Massachusetts. He also meets Alice who runs a restaurant. If you know the song, you kinda know what happens. There’s a loose feel to the movie even when it’s following along with the narrative of the song. Arlo is fine at playing himself on the screen. Folk legend Pete Seeger also plays himself. This is a fine Blu-ray to have around the house to get you in the Thanksgiving spirit. Although remember after dinner to only dispose of the leftovers in legal dumping grounds. The bonus feature is the original trailer.

Extremities marked the moment when Farrah Fawcett went from ’70s icon to an ’80s actress. The star of Charlie’s Angels was considered rather lightweight as a performer. Broadway was not prepared for her arrival when she starred in Extremities in 1982. She brought critical acclaim as a woman confronting her sexual attacker. Her performance on Broadway gave her the clout to star in The Burning Bed. In 1986, Extremities turned into a movie. The film reunited Farrah with James Russo as her tormentor. Farrah finds herself at the knife of a masked man who attempts to sexually attack her. She escapes, but can’t find any security in the local police. Nobody seems to care about tracking down the attacker. What worries her most is that the guy had made off with her wallet. She does her best to put the incident behind her, but trouble doesn’t knock on her door. Russo is extra creepy when he decides to try a second time to have his way with her. Farrah and Russo bring out the fear in each other as the power shifts in their second encounter. This isn’t campy. The intensity of the performances hasn’t diminished over the last 30 years. The action is rough and unrelenting. This is not going to be confused with an episode of Charlie’s Angels. Director Robert M. Young doesn’t attempt to open up the play so much as bring us closer to the heat between Farrah and Russo. Extremities allows Farrah to prove that she was more than a poster. The bonus feature is the original trailer.