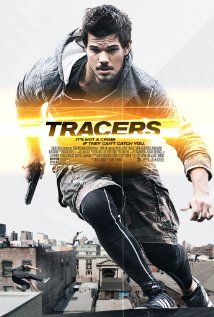 The Twilight trio (Robert Pattinson, Kristen Stewart, Taylor Lautner) were insanely famous for about six years because The Twilight Saga was an insanely successful franchise in cinemas. After Breaking Down finished its theatrical run a clock seemed to be ticking. How long before all three would return back to their pre-Twilight levels of fame? And who would be the first to crash down? If you picked Lautner you’d be a winner as the onetime Jacob Black has started a fairly hilarious descent back to mediocrity from which he came. After Abduction managed to draw flies, and was torched by anyone with a pen and a brain, a brief moment in an Adam Sandler film has been the highlight of his post Twilight career.

It appears that Lautner’s inability to bring in an audience in a star vehicle tailor made for him to transition into real movie stardom, as opposed to franchise success, is very evident and very real. His latest starring vehicle, Tracers, has found its way direct to video to appeal to the Parkour in an action film market that apparently wasn’t satiated by Freerunner, the French franchise District 13 and the American remake of it Brick Mansions.

Cam (Lautner) is a NYC bike messenger who owes a lot of money to a lot of bad people. When he runs into a beautiful thief (Marie Avgeropoulos) in a crew that uses Parkour to get away from jobs. Needing the money, Cam joins up with the gang for the money. When things blow up in his face he winds up having to save the day and such.

The film feels similar to Abduction in that it’s a starring vehicle designed for someone who actually has screen presence and charisma, which Lautner is showing he doesn’t have in spades. It tries to hit all the right moments, has an eerily similar tone and a shoe-horned love interest to boot. It feels designed to try and maximize Lautner’s looks and physicality but unfortunately it winds up being a fairly pedestrian action film that rightfully will be in the Wal-Mart discount bin sometime in the next month or so. And it’s not because of a fairly terrible performance from its star … but it doesn’t help the film’s general “bad action film that isn’t enjoyably bad, just bad” vibe that Lautner just doesn’t have it in him to be the sort of action star he’s clearly being pegged to be.

Lautner may have seemed like a star in the Twilight franchise, and there may be time to turn him into one, but so far being in the sort of physical action role is not something he has the skillset for. He has everything you’d want in a burgeoning action star; he’s handsome, has the proper physique and can handle the physicality of these sorts of parts effortlessly. He just doesn’t have that megawatt star power to carry the film in a way that’s meaningful.

It doesn’t help that he isn’t all that good of an actor, too, but it’s what was understood during the Twilight franchise about Lautner. He was a horrible actor giving a terrible performance but it melded in with the generic awfulness that entailed it all. Now, where he’s expected to at least be passable, he’s still the same level of awful and it stands out noticeably. He’s still with a fairly poor cast but the power of Twilight is that it had a Rocky Horror level of camp that made it passable. Anyone trying to do more than ham it up would’ve stood out and actual, quality actors like Anna Kendrick and Michael Sheen were given a pass because of the phrase “It’s Twilight.”

Lautner was a product of the franchise and seemed to be the one who had the biggest potential to be a star. Stewart and Pattinson were more of a tabloid item and he was there, this burgeoning movie star in waiting. Abduction was a shaky first film for this concept of “Taylor Lautner, movie star” and Tracers, going direct to video, is another nail in the coffin of what many had predicted for Lautner’s post werewolf career.

A Pitch Reel from the director and an EPK piece are included.