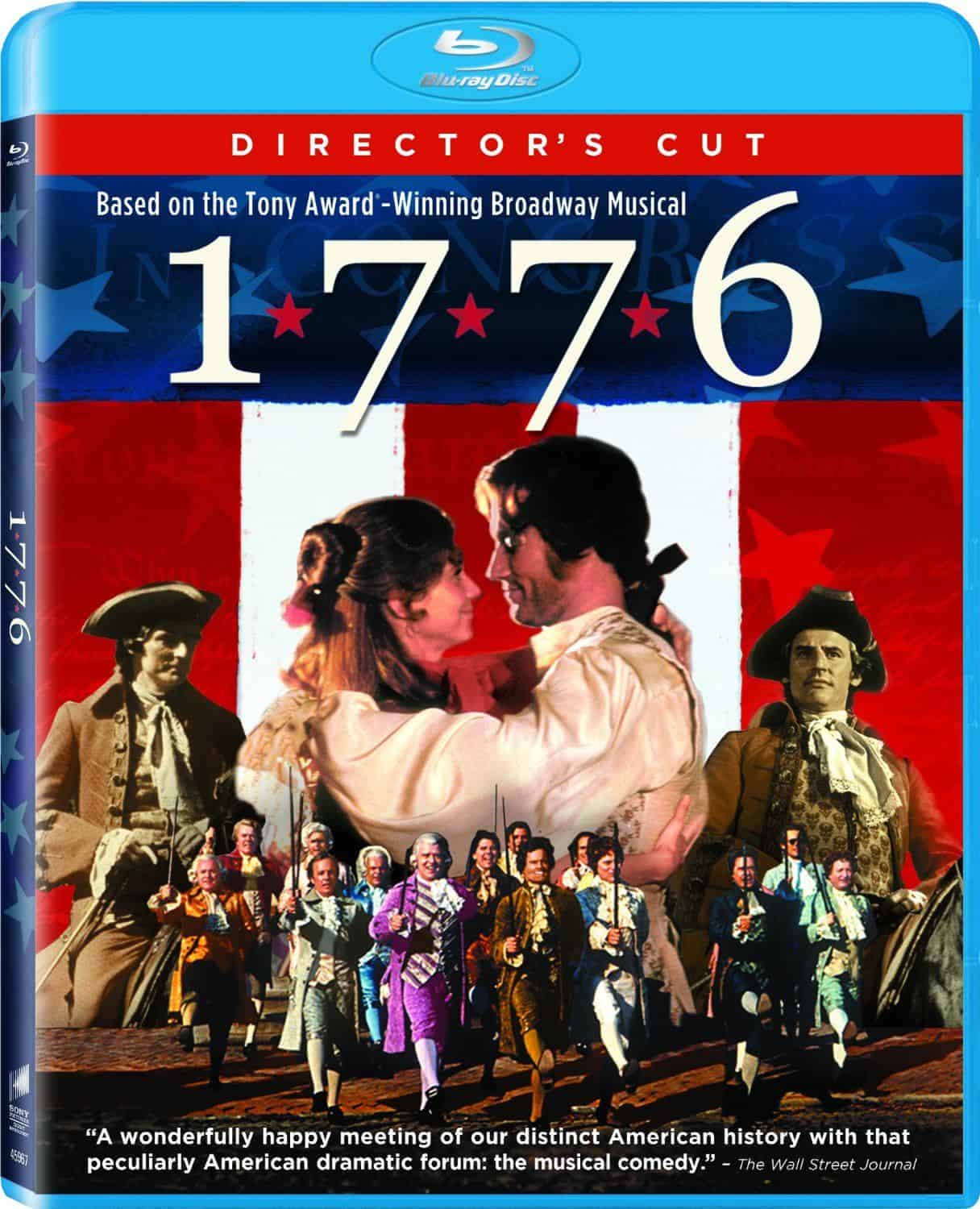 A textbook lesson masquerading as a blockbuster musical, 1776 is a straight propaganda piece brought to you from the stage that is light and fluffy enough to entertain the semi-patriotic for a bit before eventually sagging beneath the weight of its own run time. John Adams (William Daniels) takes front and center as lead Congressional organizer trying to rally his troops into declaring independence from the British Crown and signing the Declaration of Independence. He is written as a true believer who will do whatever it takes to get his fellow Founding Fathers to walk his version of the party line. It is a cartoony version of our origin story that is certainly more interested in being fun than in being educational. Watching it now, 43 years after its release, the text does show its age in a lot of respects but the Blu-Ray transfer is flawless and this is unquestionably the best this movie has looked in a few decades.

I’m going to assume that everyone going in knows the score and so to say that there are no surprises, plot-wise, is not a spoiler. This means that writer Peter Stone and director Peter H. Hunt are left to pit Adams and his can-do spirit up against the obstructionists who are trying to maintain the status quo. There is a surprising amount of time devoted to the political debate of the time which was a pleasant surprise for me as someone who enjoys history. Plus when the film does move away from that and starts poking around in the personal lives of the players the results are decidedly less engrossing. For the people out there who only know of Daniels as Mr. Feeny on Boy Meets World his performance here will be especially impressive. He comes off as an understated yet natural leader who commands the room without being showy or thumping his chest. Howard Da Silva as your stereotypical Ben Franklin and Ken Howard as a flamboyant and over-sexed Thomas Jefferson (even before we knew of his less savory sexual exploits) also turn in enjoyable yet muscular performances. Most of the other actors, much like the historical figures that portray, simply fade into the background of the picture. I do feel obligated to shout out the small comedic role of John Myhers as Robert Livingstone, the eternally abstaining voice of New York.

The structure and pacing leave a bit to be desired and those elements are crucial in a production this large. I can’t remember watching any musical that had as big of gaps in time between songs as this one. The musical numbers aren’t anything special so I personally didn’t miss them but I can see certain segments of the audience feeling as though they were sold a false bill of goods. “Molasses to Rum”, which seems to be the song rolled out as the defense of slavery (which, historically speaking, is fair), is a rather bizarre experience with a pulsating drum beat and perplexing lyrics (“fondle them, don’t finger them”). Understanding, of course, that anybody who turns to this movie for historical facts is a fool the over simplicity laid at our feet soon becomes too much to handle. Jefferson has writer’s block? Well, just go find him some pussy. New York keeps dodging votes? Have their land back home get pillaged. My feeling is that the justification for this type of writing is some sort of sad pandering to the audience but these tricks are so plentiful here that I can’t help but feel as though laziness played a role as well.

The politics of right now are a bit inflamed with people more interested in crying victim than doing any sort of actual criticism so it is with great reluctance that I dip my toe into these waters… however, I would be remiss if I didn’t cast a somewhat judgmental side-eye towards the past and point out that those who are super sensitive might want to stay away lest they get their feelings hurt. There are female characters but they are basically used as pawns in the greater game that the men are off playing and while slavery is debated no actual slaves (or people of color) make it to the screen. The film is a testament of its time and anybody who is still shocked by that should probably stick to movies that make them feel warm and comfy. 1776 is meant to be a patriotic good time that will find a way to stoke your American pride no matter how repressed it may be, and within that framework there is hardly any time to dwell on those uglier warts in our past. It may not be my chosen genre but certainly there is room for that in our cinematic world. The issue is that it is heavily burdened with scenes that go nowhere and do nothing (I’m looking at you scene wherein Adams and Franklin probe Martha Jefferson about her sex life). A slimmer, tighter version (could we all agree on 2 hours?) would have made for a better time for everyone. The material is already a little dry and to stretch it and expand it in the name of reaching a number of minutes that is more suited for Broadway hardly seemed like the wisest idea.

The special features are pretty standard fare for a non-Criterion release these days which is not to say they aren’t worth the few extra bucks that it would cost to get the Blu-ray as opposed to streaming the film somewhere. We get two commentaries including a brand new one with Peter H. Hunt, William Daniels and Ken Howard, a few deleted and alternative scenes with commentary and 4 behind the scenes screen tests. It also includes an extended cut that tacks on 2 extra minutes for those who found the original version to be a bit too breezy.