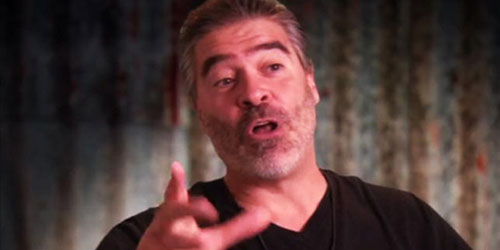 Noted wrestling company murderer Vince Russo has gone ahead and written another blog.

WHAT YOU ARE ABOUT TO SEE IS A PARODY OF PROFESSIONAL WRESTLING.

If that disclaimer was put at the top of all wrestling shows today—then I would watch. If the producers of the shows would just come forward from the outset and say, “What you are about to witness is stupid, childish, nonsensical, exaggerated and could NEVER happen in REAL LIFE in either your, or mine lifetime”-–then I would watch. But they don’t. In 2015 they want us to believe that something not even the equivalent of an old Saturday morning cartoon—where you had animals talking—is REAL.

“Pro wrestling” has done a tremendous job in becoming a parody of itself over the years. Basically what you’re watching every Monday night is a Christopher Guest movie, like aBest in Show, or The Mighty Wind; one film was an overly exaggerated presentation of the Westminster Kennel Club Dog Show while the other was a take-off on the producing of A Celebration of Folk Music Special on PBS. They were comedies—both poking fun at a genre and the people who live in that–shall we dare say—“BUBBLE”.

My favorite wrestling parody today is being exhibited as we speak with Jeff Jarrett winning the King of the Mountain Title–and BELT that went with it— on a TNA ppv, and now defending that same title for his own company GFW—in small minor league ball parks around middle America. PLEASE–read that last sentence—are you actually going to argue with me that that’s NOT a parody of professional wrestling in 2015? That movie right there has FRED FREAKIN’ WILLARD written all over it! The only problem is that while Willard would make an outstanding wrasslin’ promoter in a comedic film, he is way too old to be the Champion of that same promotion in which he would actually have to defend that ridiculous title in fake fights on baseball infields in places like Indiana.  But, outside of that–that is a major motion picture that Christopher Guest would have a field day with.

Man, in my own mind I have to break this down further—not that any of it means anything–but at the time it is just entertaining the hell out of me.

THE KING OF THE MOUNTAIN CHAMPION.

OK, so what does that actually mean—to anybody? Well, at first glance one would have to think that Jeff is INDEED Champion of THE MOUNTAIN. So now, that extends the question—well—what MOUNTAIN are we talking about? Now, I believe that he actually won this epic match in Orlando Florida at an amusement park, but I don’t believe there are any MOUNTAINS in Florida. However, there are mountains where both TNA has its headquarters and Jeff Jarrett lives—Nashville, Tennessee–the SMOKEY MOUNTAINS. So now, one would have to ask–is Jeff the KING  of the SMOKEY MOUNTAINS?

But, wait, here’s where it gets a bit confusing—now you have, or had, I not sure if they’re even still in business—SMOKEY MOUNTAIN WRESTLING—wouldn’t there Champion “technically” be KING of the SMOKEY MOUNTAINS? Well, now, with that being said, could we be seeing a possible feud between Jeff and the Champion of SMW–if it does in fact still exist–where they would be fighting over the SMOKEY MOUNTAINS with winner taking all? I don’t know, they get the right to put their company’s flag on Ol’ Rocky Topmuch like Neil Armstrong and Buzz Aldrin drove the US flag into the surface of the moon.

Wait, I’m really getting off track here–Jeff can’t do something with SMW–if it does indeed still exist–because he is in a compelling angle with TNA right now, where he is signing away their talent–backstage at their events–after they invited him to participate in their said King of the Mountain match. So now I have to wonder—will Jeff be defending HIS MOUNTAIN on TNA against their Champion EC3? You know–a belt-for-belt type of thing? And then if EC3 goes over and wins the right to be KING OF THE MOUNTAIN, then what–which mountain are we talking about? EC3 lives in FLORIDA, where–as we already determined–there are NO MOUNTAINS!!!

If it’s coming across like I’m confused . . . it’s because I am. Again, going back to start, what does the KING OF THE MOUNTAIN TITLE actually represent. Maybe I’m looking at it the wrong way. Since this is television, can we be looking at something like KING OF THE HILL? Is Jeff planning on taking over that show and wrestling HANK for his time slot on Fox so his company GFW would have a home? What? Maybe, you say? Well in all honesty, Jeff might as well book himself to wrestle an animated television star because going back to his USWA Memphis roots–that was the main competition for his daddy on Saturday mornings.

But, unfortunately guys, this isn’t 1975, it’s 2015, some FORTY YEARS later. And what might have worked then when you were competing with Magilla Gorilla is an absolute joke today. No wait . . . strike that. It’s not a joke it’s a PARODY OF THE WRESTLING BUSINESS.

Somebody has to tell these nimrods to just stop. They are making jackasses out of themselves to any human being that has even one strand of intelligence in their DNA.