Why You Should Be Reading… Boom Studios’ Arcadia

Hey everyone, and welcome back to another addition of WHY YOU SHOULD BE READING…

I first would like to send out a bit of an apology, I recently took an additional job at a record store, (something I’ve wanted for a long time) so my schedule has been a bit sketchy. I appreciate all who continued to keep up even if a few of the articles recently have been up late. I promise I got some cool stuff coming up, and I plan on having a sweet hip hop write up to go along with one of the next Why You Should Be Reading… columns. Make sure you keep an eye out for that because I am pretty happy with how it’s turning out. Anyway, on to this week, Ive been feeling the Sci-fi bug, and figured it would be a good time to pull out Arcadia as our next topic of discussion. Ive been sitting on this series a bit waiting for the right time, and I think that time has presented itself. Plus with Halloween coming I figured continuing with a Sci-fi vibe can only help set the scene for the month of creepy and scary atmosphere. Speaking of which I hope people have cool costumes set up for the holiday, and I myself am proud I found a General Grievous mask I can wear for the occasion, its always good to be the villain.

Now on to Comics….

Arcadia sends out a clear wink to the matrix, with a story that also shows elements of Tron and other Sci-fi classics. The concept of dual realities always intrigued me, but what sets Arcadia apart is the fact these 2 worlds count on each other for survival. Unlike the Matrix the digital world is fully aware of the real world and vise versa. In the future a plague has swept over the earth, so to escape its grasp billions of humans have uploaded digital versions of themselves into super computers. This concept alone kinda creeped me out a bit, and I mean that in a really good way. Now as a person who respects the digital world, but find my self leaning to more of the analog style of things, I couldn’t imagine having a doppelgänger, or my entity stored into a massive supper computer that some how supports a synthesized version of life. The more I think about it the more my brain is filled with so many questions, are the lives of the people trapped inside really living? Or are they just playing out a life through a computer program? It isn’t actually clear but since Arcadia has their own Government and officials who run their digital world it is assumed these people are alive and coherent. I suspect the writing team will explain how all this is possible as we continue to move along. Speaking of Government, that is where some of the drama of sorts begins to come into play, as in all politics nobody will ever be happy, causing Arcadia and the real worlds to be at odds. This is no good when both parties lean on each other for existence. If the real worlds stops monitoring the super computers Arcadia begins to suffer, if Arcadia disconnects the real world will not have the means to continue to research and find a cure for the virus/plague threatening the extinction of man. Interesting situation isn’t it? With each government pushing their own agenda’s and of course the ever imminent treachery that all governments seems to produce, the situation continues to look grim before it has any chance of getting better. 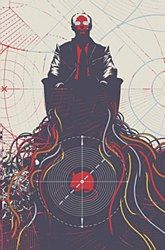 Insert Lee Pepper, he seems to be the stand out of a interesting cast of characters, and seems to be one of men planning to take on this situation head on. He has done well thus far trying to keep both governments in line, but now he must continue to try and stay one step ahead if he has a chance to reunite Arcadia and the Real world on co existing terms. War continues to brew with each choice, and ripples seem to flair through out both governments as personal agendas begin to boil over. It really gives us a glimpse into the life of politics in our “real world”. Sometimes it makes me question what is real or not, and if you just look at the news you can’t help but notice the famous reference the world is just a “game” really is true. Play the game or you will be played.

Visually the book is great, the artwork is glossy yet crude, and the detail put into the comics are fine and sharp. From landscapes down to the smaller items,your eyes won’t have any trouble gravitating to any points emphasized by the art team. Plus the subject matter allows for them to be very creative when detailing out elements of each world. Writing wise they have nailed it thus far and i have massive respect for Alex Paknadel for continuing to maintain this story.

The true task however will be longevity,  and I feel there is plenty of story to play with for the long run in that respect, and I have all the faith Alex and the writing team will continue to push the envelope on what is already an interesting story piece. I personally hope they bust this wide open and take it there with war, I have no idea how something like that would play out so that seriously has my curiosity meter on full blast. I mean it can’t be as easy as turning off the super computers when the real world considers to attack Arcadia, right? Plus assuming Arcadia does have the cure to the Virus, could they upload a worse virus to the real world and hold them at Ransom? I have so many questions, and it is that, that makes this a WHY YOU SHOULD BE READING… comic.

Well guys as always have a wonderful week, and please stay tuned, I got some cool stuff planned I think you will dig, and dig it good!

Keep on Keepin on….