Stan Hansen. I’ll admit I don’t know much about the man but here is what I have learned through some digging and the power of the internet. John Stanley “Stan” Hansen was known for his stiff wrestling style and his loud, rowdy cowboy gimmick. It appears he became more popular internationally, especially in Japan, than in the US. Hansen, ready for a fight.

Like so many wrestler Hansen was a football player before finding his way into wrestling. In 1976 Hansen made his debut for the World Wide Wrestling Federation and quickly began to feud with the Heavyweight Champion Bruno Sammartino over the title. During a title match Hansen broke Sammartino’s neck (during a botched powerslam). When Sammartino recovered Hansen faced him for the title but was unsuccessful in take the title off of his opponent. He left the promotion briefly before returning to feud with Sammartino and Andre the Giant. He feuded with Bob Backlund, a feud that culminated in a steel cage match at Madison Square Garden.

He then competed in the American Wrestling Association where he won the World Heavyweight Championship. He also wrestled for New Japan Pro Wrestling where he had a nasty encounter with Big Van Vader. Both men were known to be stiff in the ring and, when fighting for the IWGP Heavyweight Championship, exchanged legitimate punches. (Vader had been struck in the eye by Hansen’s bull rope, angering Vader and, ultimately, leading to the match ending in a draw.)

In All Japan Pro Wrestling he succeeded in both singles and tag competition, tagging with Ted Dibiase, Terry Gordy and even his former opponent, Big Van Vader. You can see one of Hansen’s physical AJPW match here.

Their alliance was over quickly and, when battling in Tokyo Dome for the championship Hansen poked Vader’s right eye with his thumb, causing Vader’s eye to pop out of the socket. Vader, mid-match, pushed his eye back into the socket and continued wrestling. The match ended in a no-contest due to the injury. (If you want to see the gross-out moment you can watch it here but I don’t recommend it. Happens around 1:56. Again, a severely gross moment but if that’s you’re thing, go ahead.)

Hansen then returned to the United States wrestling in WCW where he feuded with Lex Leuger and teamed with Dan Spivey throughout his time in WCW. After his brief run in WCW Hansen returned to AJPW before retiring in 2001.

One thing I can’t help but notice with Stan Hansen is how similar his appearance is to that of a certain former wrestler/ commentator JBL. 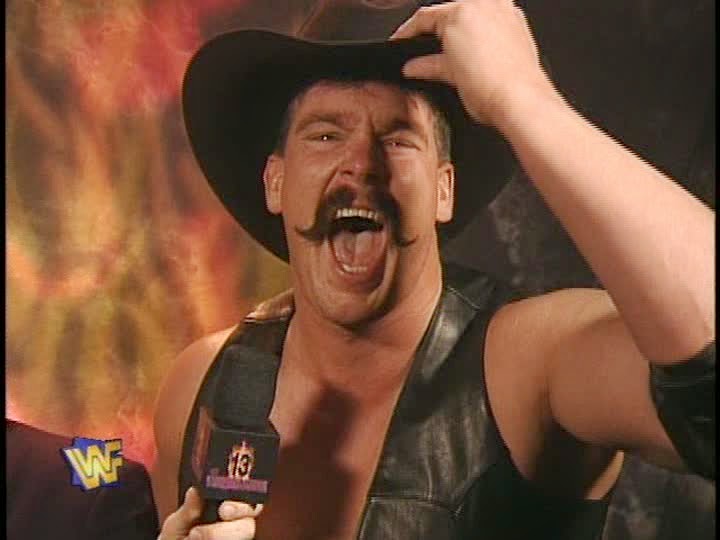 Both men wore hats to the ring, chaps, carried bull-ropes and fit neatly into the rowdy cowboy gimmick.

Can anyone tell me more about Stan Hansen? I feel like I don’t know near enough about the man going into the Hall of Fame.