William Castle was a filmmaker who understood that if going to the movies was a communal activity, you might as well give them a way to feel part of the fun. His films came with great gimmicks such as letting the audience decide the villain’s fate or coward corner if you’re too scared to see the ending. He made the act of going to the cinema fun and not just a place to watch a screen bigger than your TV set. Now two of his biggest films are finally coming to Blu-ray with Strait-Jacket starring Joan Crawford and Price’s The Tingler arriving on August 21. For Strait-Jacket, Castle handed out little cardboard axes so you could hack away on your friend like Joan did to her husband (Six Million Dollar Man‘s Lee Majors). The Tingler was shocking in many ways since in select theaters, Castle had the chairs wired to jolt filmgoers at the climax. Who wouldn’t want to come out for the experience? Here’s the press release from Scream Factory with details of the bonus features: 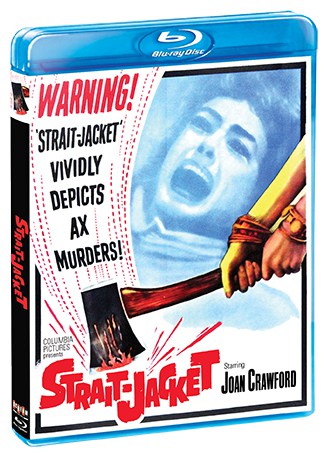 This August, beat the heat with two classic chillers from Scream Factory! On August 21st, 2018, two of legendary horror filmmaker William Castle’s best-loved films will make their Blu-ray debuts loaded with bonus features, including new interviews and audio commentaries on each release. Fans can pre-order their copies now by visiting ShoutFactory.com

In Strait-Jacket, film legend Joan Crawford gives a terrific performance in this chiller from pioneer horror movie producer William Castle. Crawford plays Lucy Harbin, a woman who goes berserk when she finds her husband in bed with another woman. With her three-year-old daughter accidentally witnessing the grisly act, Lucy axes the couple to death. She spends twenty years in a mental institution for the double murder.After she is released, she moves in with her brother, Bill (Leif Erickson), his wife, Emily (Rochelle Hudson) and Carol (Diane Baker), her own daughter who is now twenty-three. Her nightmare is over … or is it? When a spate of ax murders start occurring suddenly in the neighborhood, police think Lucy has reverted to her old ways. The truth is finally revealed in a rousing, blood-chilling finale.

In The Tingler, Vincent Price stars as an obsessed doctor who discovers a parasitic creature which grows on the spinal cords of terrified people. If they scream, the Tingler can be destroyed. If they don’t, it will sever the spinal column and kill them. He successfully isolates and removes the Tingler from a deaf mute (Judith Evelyn) who has been scared to death by her devious husband. Once captured, the Tingler escapes and runs amok in a crowded movie theater. Terror is loose, but can it be stopped?

The Tingler is legendary horror director William Castle’s magnum opus. After the success of House On Haunted Hill, Castle devised a new gimmick called “Percepto.” Participating theaters would wire seats so that random moviegoers would get a tangible electric shock during climactic moments in the film. Another novelty used to maximum effect is the short color sequence depicting blood pouring from a faucet and filling a bathtub. Castle went on to direct more cult classics like Homicidal and 13 Ghosts and later produced the mainstream hit Rosemary’s Baby.