Heroes in Crisis #1 – This is one of the most highly anticipated new series of the fall, as Tom King is given the opportunity to tell a Big Event story, complete with the word Crisis in the title.  I’ve felt kind of divorced from the DCU lately – the highs of Rebirth have faded a little, and with price increases and the lack of digital codes to accompany them, I’ve shifted most of my DC buying to bargain bins some months down the road.  King is an interesting choice for an event or story like this, as his approach to storytelling is not the standard. This issue sets up the idea of Sanctuary (which is not a place by the way), where it looks like someone has killed a bunch of heroes (including a couple A-level ones).  Sanctuary was designed to help heroes who have seen too much, or who are having trouble coping with the terrors of their job. The Trinity arrive to investigate the crime scene, while we also see Booster Gold and Harley Quinn share a meal and then fight in a remote diner. As well, we have scenes where various characters speak to the camera.  King takes a very structured approach to his stories, with the end result being that this first issue doesn’t take us very far, but does set up an intriguing story (which was recently expanded by two issues). Clay Mann is given plenty of opportunities to shine, and everything feels very slick and polished. 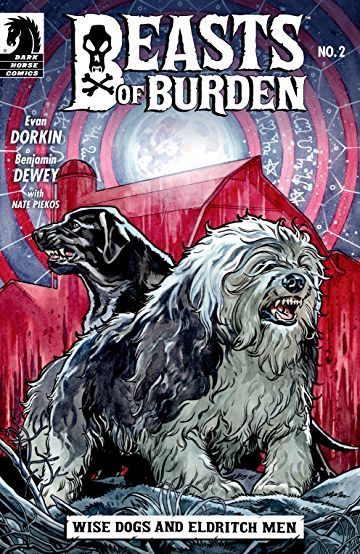 Beasts of Burden: Wise Dogs and Eldritch Men #2 – This latests BoB series is giving us a much deeper look into the Wise Dogs organization – the mystical dogs that keep the Earth safe from various threats.  We learn this month that they have worked and can communicate with humans, as the new threat they face causes one of their number to be badly injured. Evan Dorkin is building a more complex story than we’ve seen with this series before, and Benjamin Dewey continues to impress with his art; I don’t mind the loss of Jill Thompson as much as I thought I would.

Black Panther #4 – I really like Ta-Nehisi Coates’s Afro-futurist take on Star Wars in this title, but am still pretty lost when it comes to thinking of this as a Black Panther story.  T’Challa and the other Maroons face defeat in their latest attack on the Wakandan Empire, and are surprised by the appearance of Manifold. This is an exciting comic with some great Daniel Acuña art, but I miss our regular T’Challa and Wakanda.

Doctor Aphra #24 – We all know that Aphra’s a pretty terrible person, but when held up against some of the other sentients we see in this issue, as many of the people who want her dead converge on a spaceship about to crash into a planet, she doesn’t look so bad.  Simon Spurrier and Kev Walker are making a very entertaining comic. 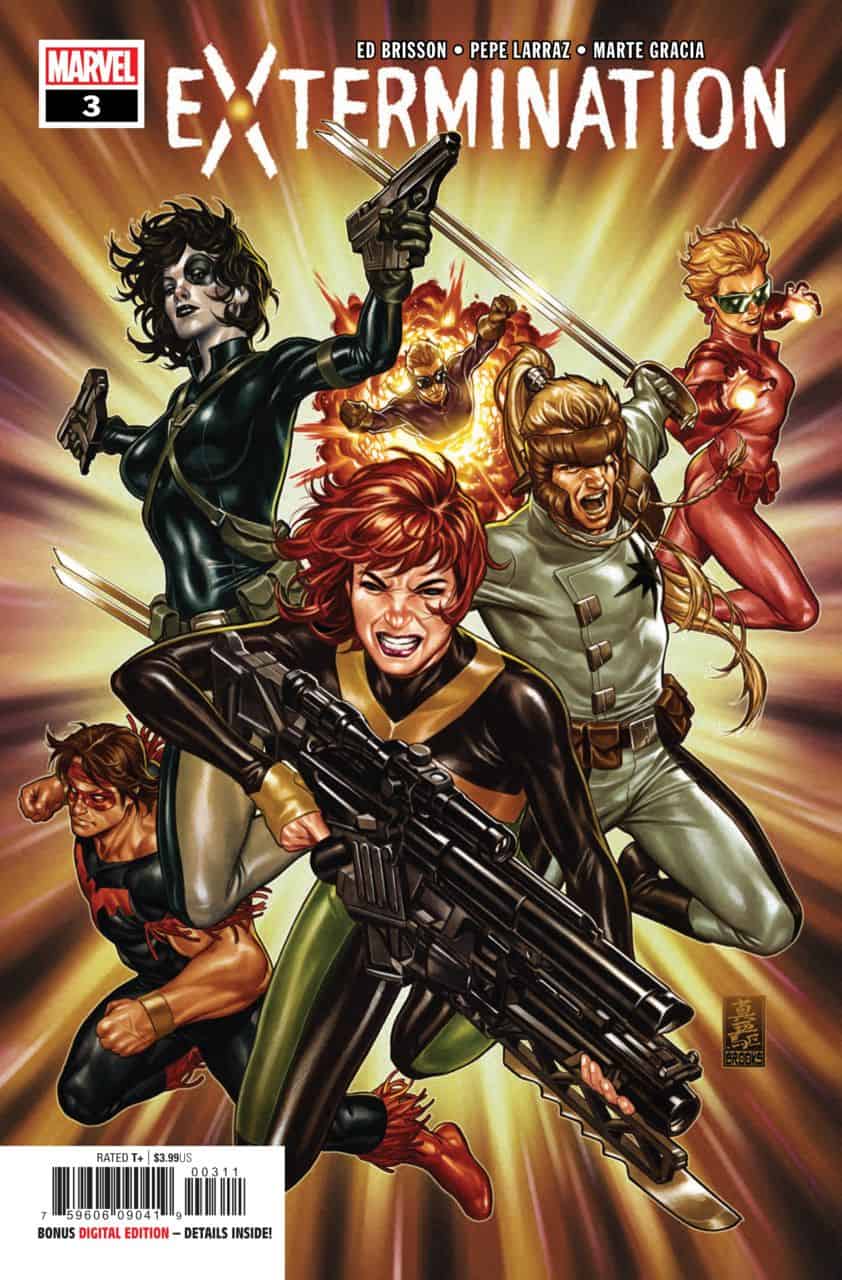 Extermination #3 – Leaving aside my utter contempt for the character of Ahab, I thought this was another solid issue in this series that is cleaning up inconsistencies and alternate versions of characters in the X-Men universe, paving the way for the upcoming Uncanny X-Men, and (I learned this week) an X-Force revival written by Ed Brisson.  It’s nice to see so much new life in the X-World.

Friendo #1 – I loved Alex Paknadel’s Turncoat at Boom!, so was immediately on board when I saw he had a new series coming from Vault.  This book, with art by Martin Simmonds, is set in a near-future LA that is being choked by forest fires. Leo, the main character, is in guerilla marketing and gogo dancing; his girlfriend makes more money than he does, and works to compensate for his unhappy childhood by buying him expensive gifts.  She gets him a Friendo – a pair of eyeglasses that are run by an AI that exists to be the wearer’s best friend. Jerry, Leo’s Friendo, is a little odd, and when Leo and his friends get lost in the smoke of a particularly bad night in LA, things get weird. This is a solid first issue, although a crucial sequence with a homeless prospector (yeah, really) gets a little hard to follow.  I’m curious to see where this goes, and am happy to support this title in the hopes that Paknadel creates something as good as his last series. 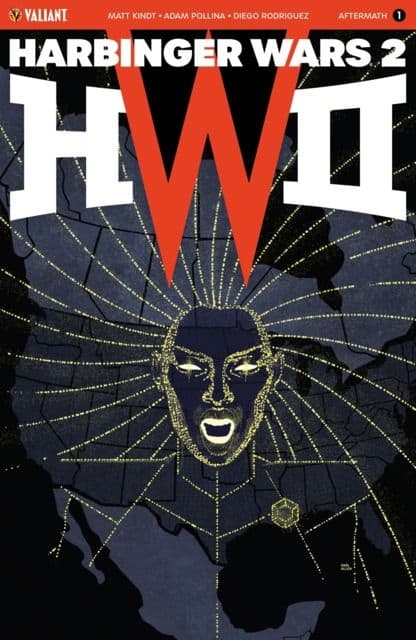 Harbinger Wars 2 Aftermath #1 – I’d thought that this epilogue issue might provide the emotional force that this whole miniseries was missing, but really, it just checks in with each person affected by the story, for the most part, and can be seen as a teaser for the new Valiant series launching this fall.  I was excited to see that Adam Pollina was drawing this comic, but he didn’t get much of a chance to cut loose or show his stuff here. I regret picking up this whole event.

Man-Eaters #1 – I enjoyed Chelsea Cain and Kate Niemczyk’s work on Mockingbird at Marvel, and thought I’d see what they can do without editorial constraints.  They are giving us a pretty cool new series set in a world where a mutated cat parasite that most humans are exposed to regularly, can cause girls to transform into massive killer cats upon the onset of menstruation.  The story is told by a young girl who lives with her single father, a police officer in Portland who often has to work with SCAT – the government organization that manages “big cat” attacks. This issue is almost all set-up, but it has a charm to it that makes me curious to see where the next issue is going to take things.  Niemczyk’s art is lovely, and Cain, who was recently screwed over by Marvel, has a clear statement to make with this book that has me intrigued. I’m definitely coming back for the next issue.

Marvel 2-In-One #10 – Johnny and Ben have been having a pretty hard time of late, but now Johnny’s faith that his sister is alive is restored, as are the duo’s powers, so it’s time to take care of the new version of the Fantastic Four that has come looking for them.  Ramon Pérez continues to provide some great art for this book, but I fear that Chip Zdarsky didn’t give this issue his all – it lacks the emotional punch of some of the earlier issues. I’m still not sure what the future of this title is going to be – the next issue stars Mister Fantastic, which is interesting.  I should probably be reading Fantastic Four if I’m going to read this book, right?

Poe Dameron #31 – Charles Soule’s exploration of the Resistance, the small force fighting against the galactic takeover of the First Order, comes to a close with this issue.  This last storyline basically shows us what the supporting characters from this book were doing during The Last Jedi, the film that kills off almost all of the Resistance. At times, I’ve really liked this series, and appreciate that it’s helped flesh out a lot of the story that is not made clear in the two films.  Poe’s character is really just a cipher in the films, but this gave him some space to actually exist (if never to actually become interesting). Marvel’s Star Wars output feels like it’s winding down in a lot of ways, and it’s strange that there are no series set in the era being shown in films now.

The Punisher #2 – Matthew Rosenberg has Frank continuing his fight against Hydra, which is taking extreme measures to protect itself from him.  At the same time, Fury has Power Man, Iron Fist, and Daredevil trying to get ahold of Frank to slow him down. This run has started off pretty well; I think I liked Frank in the War Machine armor better, but this is all acceptably fresh, and looks great thanks to Szymon Kudranski.

Shanghai Red #4 – Red/Molly/Jack continues to follow her path of vengeance through Portland, but discovers that she might be following some bad leads.  She also ends up in the Chinese tunnels under the city, which is a setting I wish writer Christopher Sebela spent more time in. I continue to enjoy this series, but it’s perhaps starting to lose some steam, especially compared to the very strong first issue.

The Wicked + The Divine: 1373AD – Once again, we look to the past to learn about this series.  This time around, Kieron Gillen is joined by the incredible Ryan Kelly, and they give us Ananke’s confession, at a time of plague and a Lucifer who doesn’t die when she is supposed to.  It’s an interesting issue, providing some more insight into what’s been going on in the main book, but like the parent title, I feel like the story has run a little too long, and I found my attention wandering some.

X-Men Red #8 – Jean’s team has to figure out how to stop Cassandra Nova from spreading her Sentinites across the globe, and they choose to do it in a very visually uninspiring way.  I like this book a great deal, but I’m not sure where it’s heading, what with the other “coloured” X-Men books coming to a close, and Uncanny X-Men debuting soon. It feels a little like Tom Taylor is rushing to wind down his story, making things happen a little too quickly.  I do like the not so subtle commentary about how powerful Internet hatred might really be…

X-O Manowar #19 – Colonel Capshaw, Valiant’s answer to Maria Hill, is in hot water after the destruction of the Loveboat (Valiant’s answer to the Helicarrier) in the Harbinger Wars.  Now, she’s been assigned with a task that could be the last of her career if she fails – she’s to get Aric to go with her to investigate an alien landing in Australia. This has a lot to do with the character and series Divinity, as writer Matt Kindt starts tying together the Earth and the strange world portrayed in the Divinity books.  It’s a pretty solid issue, drawn by Juan José Ryp, and one that doesn’t give Aric a lot of space as a character.

Quicksilver: No Surrender #1-5 – I was very impressed with Saladin Ahmed’s writing on the Black Bolt series, so I was curious to see what he would do with Quicksilver, a notoriously difficult character to write.  Pietro is stuck in time – everything is frozen except for ghastly figures that look a bit like him who go around killing anyone he is connected to. It’s an interesting character exploration, and it works pretty well, although it probably could have been more effective as a four-issue series.  Eric Nguyen’s art is nice, but at the end of the day, this wasn’t particularly memorable.

Tony Stark Iron Man #2&3 – I don’t think I’m feeling Dan Slott’s Iron Man, and his need to surround Tony Stark with a large supporting cast.  In addition to mainstays Jim Rhodes and Bethany Cabe, Tony is also now hanging out with Jocasta, his biological mom, a new scientist, and some other folks, a whole lot.  It seems like Slott is trying to recreate the Parker Industries staff, and the feel of his Amazing Spider-Man run. Three issues in, and even with the Controller messing with Stark’s business, it doesn’t feel like there is any sort of believable threat being constructed, and with that, a true purpose to the title.

Postal Vol. 4 – I like the episodic nature of this series.  This time around, one of the citizens of Eden, the secret town for criminals, has been found by his former friends in the white nationalist movement, and to protect him, Laura is prepared to take the town to war.  This series is really very TV-ready; I wouldn’t be surprised to see it on FX some day soon.