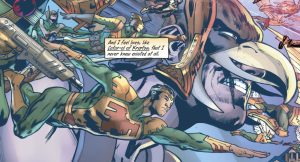 Catar-Ol, The Hawkman Of Krypton, Gets The Spotlight and Modern Day Implications?! Solicitation and cover below.

Next stop: Krypton! As Hawkman’s intergalactic road trip continues, the next location on his itinerary is the ruins of Krypton, the alleged location of the super-weapon that will help him stop the Deathbringers. There, he’s suddenly whisked away to Krypton’s final moments and meets his past-life predecessor, Catar-Ol. Hawkman tries to learn the final fate of the super-weapon, but the planet goes boom before Carter can get the goods. Looks like it might be time for Plan B…