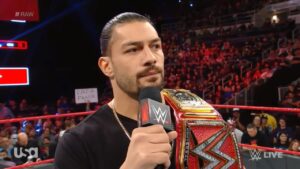 Roman comes down in street clothes and says he has come out and spoken as Roman Reigns and said he was a workhouse – but it’s a lie. His real name is Joe and he’s been living with leukemia for 11 years. It’s back and he’ll relenquish the Universal Title and he’ll take any prayer he can get, but he doesn’t want anyone to feel bad for him. He’s had it since he was 22 and he able to put it in remission then. The last time he beat it, he had no job, no home, and a baby on the way. WWE gave him a chance and he’ll be back and kick ass – but he won’t just be fighting for the title, he’ll fight to show the fans, his kids, and his wife that when life throws him a curveball, he’ll crowd the plate and swing for the fences. Roman gets a “thank you Roman” and delivered the absolute best mic work he’s ever done. Dean and Seth hug Roman on the ramp and give the Shield fist bump. Wow – that was one of the most emotional things on Raw ever.

Lashley and Finn Balor have a short, good-ish match with Balor winning after countering the Yokosuka cutter with a schoolboy. Corey burying Lio’s chanting was fantastic. Sasha Banks comes out for a match and we get a backstage promo, then Drew is shown claymore kicking Braun last week before Drew chats with Dolph. Then Ruby comes out for the match and we get a promo from them. Ruby beats Sasha with her stupid kick that never looks good. The Brothers of Destruction cut a promo while HHH comes down and says it’ll take more to scare him than having Kane grab a GoPro and threatening him during his lunch hour. HHH and HBK say they’re running NXT and get an NXT chant. HHH says DX isn’t coming for nostalgia, they’re coming to kick ass. The Brothers of Destruction cut a spooky promo from a graveyard about DX’s arrogance being their downfall.

Ronda’s beating from the Bellas is shown and Dana cuts a terrible promo about winning the battle royal at Evolution. Paul Heyman puts over Roman Reigns before saying that Brock Lesnar will win the Universal Title at Crown Jewel and showcase that championship on UFC shows to showcase just what WWE superstars are capable of. Braun tells Heyman to tell Brock that he’ll kick his ass all over Crown Jewel and he’ll bring the title back to Raw and defend it every week and he’ll give Roman a shot when he gets back- so I guess he’s a babyface again or something. Drew attacks him from behind – so I guess Braun is officially a babyface again.

Drew tells Braun that he gave him a swift kick of reality and he knows that Braun needed them – they didn’t need him. Tonight, they’ll defend their titles. Elias faces Apollo Crews and lands a big knee and wins with Drift Away. Kurt Angle cuts a weird promo off a teleprompter about being a has-been and being able to win the WWE World Cup Tournament To Determine The Best in the World. Then he rattles off folks and their wacky nicknames. Well, that was a thing. They put over Cena’s kids book. Elias sings again and Baron Corbin cuts his mic for insulting him. Elias hits him with a guitar – so now I guess Elias is a babyface.

An awesome Ronda hype video airs before the Bellas come out for a contract signing. Ronda gets pie-faced and signs the contract before saying that she will end Nikki and gives her her word. Okay, that was a great little bit there. Seth and Dean swear to become the champs again for Roman Ember and Nia face Dana Brooke and Tamina, with Ember beating Tamina with the Eclipse. Titus does a Komen bit on the ramp with breast cancer survivors. Alicia and her super-long legs talk about sending Lita and Trish packing before Trish and Lita get jumped by Mickie and Fox joins in – so she’ll probably team with Mickie if Alexa can’t work due to injury, and then Trish and Lita get their revenge with more crappy strikes.

Dean and Seth comes down to face Dolph and Drew and win the belts for Roman. Seth manages to kick out of the Zig Zag at 2.9. Braun brawls with Drew and Seth beats Dolph with the stomp and they win the titles. Dean attacks Seth and lands Dirty Deeds on both of Seth’s belts. He pounds the mat in frustration – like he didn’t want to do it, but had to. Dean asks Seth if he thinks this is funny and drills him with another Dirty Deeds on the floor without mats. Fans curse a blue streak at Dean and the show is largely muted. This was quite a memorable show to be sure – there was a lot of major stuff that happened. Roman’s gone, Dean’s a heel, Braun’s a face, Dean and Seth are seemingly the IC Title feud while Braun will probably be programmed with Drew. They could give Drew the title and then you’ve got Drew versus Dolph in a chance for Dolph to truly be a main eventer again.