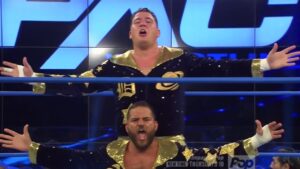 A recap of the BFG main event is shown. Scarlett comes down to stand and be hot while they plug the talent search. It’s a fine little showcase match for Trevor as an enhancement guy, as he is beaten by Jake getting involved and Sami drilling him with the Cactus Special piledriver. Cage comes down and throws Jake into Sami and the heels are sent packing. King tells the OGz that there’s a way they can get to LAX without pissing off the bosses. Gama Singh trains before his match with Rohit Raju. Gigilo Justin and Desirable Dustin, the new Heavenly Bodies come down to face LAX. If you were to imagine a modern indy version of the Bodies, it would be them. Their chemistry is okay, but not spectacular, and Justin especially looks out of shape. They get a few highlight spots, but lose to the Street Sweeper.

Tessa talks with Taya backstage and tells her that she doesn’t care about what Taya says about her. Sydal and Ethan Page confront LAX and Konnan tells them to get off the shrooms because he likes what they do in the ring. Moose and Killer Kross cut a promo on KM and Fallah Bahh and compares them to a dog chasing a car, only he and Moose are a train of annihilation. A Fenix highlight video airs before we go to Swann and Willie Mack chatting and drinking. Gama Singh hypes himself up for his match against Rohit Raju. Singh has a very basic match and Gama tells him to hit him, but he won’t. A mystery man comes in and beats up Raju. The mystery man is put over by Singh and this gets the usual reaction of anything with the Desi Hit Squad – nothing.

Johnny Impact talks about being impressed by Fenix. Scarlett watches auditions in the tub on a tablet and we get some astoundingly low-resolution video for a show in 2018. Literally any phone made in the last decade should produce better-looking stuff than we saw here. Bahh and KM come out to be killed by Kross and Moose. KM actually lands a flip dive on them, but smacks his feet on the rail. Eddie attacks Moose and sends him backstage with his kendo stick, but Kross manages to get a tap with the man disadvantage. Hooray for the evil heels overcoming this 3-on-2 and then 2-on-1 disadvantage.Moose and Eddie brawl backstage a bit and Eddie cackles.

Joe and AJ face Kurt and Nash on the first live Impact as the GWN match. Jordynn Grace is shown working out. Kiera Hogan faces Su Yung and throws her around and gets 2 off a superkick. Su lands the Panic Switch and wins it. Throughout this, Allie came out and yelled at both of them – furthering her crazy character. Next week’s card is recapped before the main event. Fenix comes out in great black and gold gear. They have a fairly good-ish little match that never gets out of first gear. It’s a collection of moves, and not even a memorable one before Johnny hits the shining knee strike and wins with Starship Pain. King and the OGz jump both men before Pentagon makes a save. Killer Kross cuts an intense promo over the fallen body of Johnny Impact – so I guess he’s the next dragon for Johnny to slay.