As the weather gets chilly, Arrow continues to heat up!

As we enter the heart of autumn and sweater weather, Arrow continues to do their best to keep us nice and cozy with the warm loving glow of our television sets. With four brand-new releases hitting shelves in November you’ll have plenty to keep you busy on those days that you just don’t want to venture outside.

Arrow Video gets things started on November 13th with the release of The Wizard of Gore from the wizard himself, Herschell Gordon Lewis. Montag the Magnificent wows audiences with his macabre magic act, but before long his volunteers start to wind up dead. Is Montag a modern day wizard or just your everyday serial killer? A TV talk show hostess investigates in this splatter classic! This release comes fully load with all the blood soaked special features you could want, including the addition of 1968’s How to Make a Doll.

On the Arrow Academy side of things we have Gas Food Lodging hitting Blu-ray on November 13th. Based off a novel by Richard Peck and directed by Allison Anders, this story of a young single mother desperately trying to find love was a hit at the 1992 Berlin International Film Festival. This newly restored release comes director approved and contains a number of special features including Chris Rodley’s 1995 documentary, Cinefile: Reel Women.

November comes to a close with Arrow Academy’s November 27th release of Robert Altman’s Gosford Park. With a stunning cast that includes Alan Bates, Kristin Scott Thomas, Bob Balaban, Michael Gambon, Helen Mirren, Clive Owen and a whole lot more, Altman created a murder-mystery masterpiece like only he could. With a brand-new 2K restoration from a 4K scan approved by director of photography Andrew Dunn and a load of new bonus features, this is one release every cinefile is sure to want. 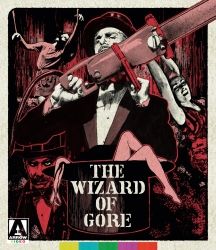 The Wizard Of Gore
From the crazed madman of the macabre, late splatter movie pioneer Herschell Gordon Lewis (Blood Feast, Two Thousand Maniacs!), comes his most fiendish feat of terrifying onscreen trickery yet – behold, The Wizard of Gore! You’ve all seen the trick in which the magician saws his glamorous assistant in half – but what about the spike through the brain gag? Or the good old smashing punch-press? Montag the Magnificent’s blood-curdling onstage performances shock and dazzle his audiences in equal measure. But when his participants start winding up dead, local TV talk show hostess Sherry Carson suspects his gruesome “act” may be more sinister than it first seems… Featuring some of the most notorious gory setpieces in all of director H.G. Lewis’ blood-soaked career, The Wizard of Gore is a stomach-churning, Grand Guignol production that’s less sleight of hand and more slice of hand!!! 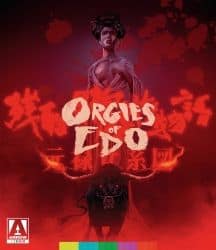 Legendary Toei director Teruo Ishii tells three stories of moral sickness set during Japan’s prosperous Genroku era in this bloody follow-up to his sexploitation classic Shogun’s Joy of Torture, and the fourth entry in Toei’s ‘abnormal love’ film series. Ishii’s politically incorrect moral lessons paint a trio of tales of tragic heroines caught up in violence, sadomasochism, incest and torture. Told in anthology style by an impassive physician (Teruo Yoshida), the first story follows Oito (Masumi Tachibana), an innocent young girl deceived by a handsome yakuza and sold into prostitution who finds herself in a doomed love affair with the man who brought her to ruin. The tale of Ochise (Mitsuko Aoi) is about the daughter of a rich merchant whose insatiable appetite for filth and perversion draws her deeper into violence, darkness and betrayal. Finally, the story of Omitsu (Miki Obana) follows a sadistic lord (Asao Koike) whose eye is caught one day by a beautiful member of his harem who shares his strange taste for pain and blood, but who holds a secret of her own that will destroy his entire household. A stylistic about-face from the director’s prior work for Toei on the successful Abashiri Prison action series starring Ken Takakura, Ishii’s erotic films grew increasingly shocking, violent and strange, and Orgies of Edo finds him combining period film detail with carnivalesque grotesquerie to create his own particular vision of love and sex. This landmark ‘ero-guro’ film allowed Ishii to experiment with elements that would later show up in his masterpieces Horrors of Malformed Men and Blind Woman’s Curse, including the participation of sideshow performers and butoh dancer Tatsumi Hijikata. 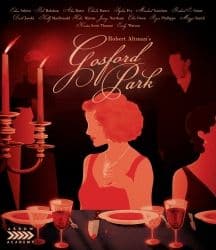 TEA AT FOUR. DINNER AT EIGHT. MURDER AT MIDNIGHT. In 2001, Robert Altman (MASH, The Long Goodbye) took the unexpected step into Agatha Christie territory with Gosford Park, a murder-mystery whodunit set in an English country house starring a host of British acting greats and with an Oscar-winning screenplay by Downton Abbey creator Julian Fellowes. It would become a huge success with audiences and critics alike. Set in 1932, the action unfolds during a weekend shooting party hosted by Sir William McArdle (Alan Bates), and his wife Lady Sylvia (Kristin Scott Thomas) at his estate, Gosford Park. Among the guests are friends, relatives, the actor and composer Ivor Novello (Jeremy Northam), and an American film producer (Bob Balaban). When Sir William is found murdered in the library, everyone – and their servants – becomes a suspect. Also starring Charles Dance, Michael Gambon, Richard E. Grant (Withnail & I), Helen Mirren, Clive Owen, Maggie Smith, Emily Watson and many more, Altman produced another masterpiece deserving to be ranked alongside Nashville and Short Cuts as one his finest forays into ensemble drama. 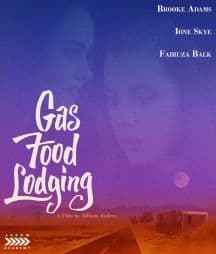 THEY’RE SISTERS. BUT IT WILL TAKE A MIRACLE TO MAKE THEM A FAMILY. Adapted from the novel Don’t Look and It Won’t Hurt by Richard Peck, Allison Anders (Grace of My Heart) whipped up a storm at the 42nd Berlin International Film Festival with her masterfully crafted tale of a young woman trying to find love while struggling to bring up her two daughters. Abandoned by her husband, Nora (Brooke Adams, Invasion of the Body Snatchers, The Stuff) waitresses to keep her head above water while raising two teenagers in a small New Mexico town trailer park. Beautiful and rebellious, Trudi (Ione Skye, Wayne’s World, Zodiac) quits school to work alongside her mother, while her sister Shade (Fairuza Balk, The Craft, American History X) whittles away her time watching old movie matinees. Their life is turned on its head when Trudi finds that she has fallen pregnant after a string of promiscuous relationships and the girls’ absent father returns with hopes of mending the relationships he broke when he left. A wonderfully engaging story of the woes of teenagers reaching adulthood, Gas Food Lodging is a distinctly American portrayal of a mother trying to raise two wayward teens with growing pains, who are learning about love, life and each other. This director-approved restoration finally affords this 90s modern classic the home video treatment it rightly deserves.