A veteran’s day video airs. A giant billion person battle royal starts to determine more of Team Raw before Braun massacres everyone. Steph comes down and says she appreciates the rage, but she needs him to channel it for what REALLY matters – her show being better than Shane’s. Ronda comes down and says she doesn’t have to wait to break anyone’s arm until Baron Corbin walks down and talks smack to Braun until Steph tells him to stop, because of course. Tamina has a match with Ember Moon that goes on forever until she wins with the Superfly dive. AOP’s tag title win is shown alongside a video focusing on Dean vs. Seth. 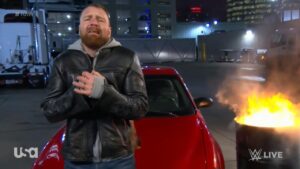 Seth comes down to talk with Corey, who tells him he needs to be focused on Nakamura before Nakamura takes his head off. Dean cuts a promo outside on a red car next to a flaming barrel. He says that Seth was too selfish to see that Dean never changed and he burns the Shield vest in the barrel. Drew vs. Angle is recapped before Drew talks about destroying all nostalgia acts. Finn Balor comes down to stand up for Kurt and Drew makes him face Dolph, and if he beats him, maybe he’ll consider facing him. Dolph and Balor have an okay little match. Dolph bumps around for Balor until Balor wins with a really weak cradle.

Steph congratulates Balor, who looks tiny, and says that on Sunday, all three of them need to work together. Becky’s promo from SD is shown and Ronda calls her the millennial man and someone with a porcelan self-perception. She is so intense until Nia and Tamina come by and wish her luck. Ruby Riott apologizes for last week before Nattie comes down and gets beaten up and laid out with a terrible-looking Hart Attack.

The battle royal happens again for the Raw tag team match captains. Roode and the Ascension close it out, with Roode and Gable winning. Heyman and Brock come down with Brock in a new Suplex City shirt with Heyman talking about Brock wanting to face AJ more than anyone in UFC. He’s going to check into Hotel California on Sunday and if fans don’t get the reference, they can Google it. Jinder comes down and says that last year, he was supposed to face Brock – but tonight, he’s here to help Brock focus on AJ. He offers to help him with his mantra and Brock tells Paul that he should really hear it because he’s Jewish.

Brock rarely speaks, but want he does, he’s great. He proceeds to meditate for a minute before beating up Jinder, suplexing the Singhs over and over, and landing a series of delayed Germans just because he can. He closes this out by F5ing Jinder on the floor. This was easily the best thing Brock has done since the Samoa Joe match – it was just incredible. Lio Rush and Lashley come out, do the fake mooning bit and Elias comes out. They have a nothing match and Lio distracts Elias, allowing Lashley to win by countout and join Raw’s team. Elias beats him up. Titus Worldwide and Mickie James visited veterans earlier at a hospital.

Alexa has her team out before making Bayley vs. Sasha for the final spot. They have a perfectly okay little match that’s like one of their big NXT matches, only with 1/10 the heat and at half speed. Tamina and Nia beat up both women and then the Riott Squad come down, with Ruby theoretically being the last person. Backstage, Becky has the disarmher on Ronda before she and the rest of the SD women beat up Raw. Becky hits Ronda with a chair and Charlotte spears Nia. Somewhere in all this, Becky busted her nose up. Becky celebrates with her team with her arms caked in her own blood.

The SD women go through the crowd with no security while a fan awkwardly waits for any one of the dozen or so women to high five him – okay, that was hilarious and sad. Becky and Ronda exchange crazy faces and man has Becky just made herself a top act in the company as a whole. This heel turn is the best worst-booked thing in ages because she just gets more and more over and now she’s unlocked this new level of greatness within herself. She oozes confidence and feels like a money-drawing act right now.