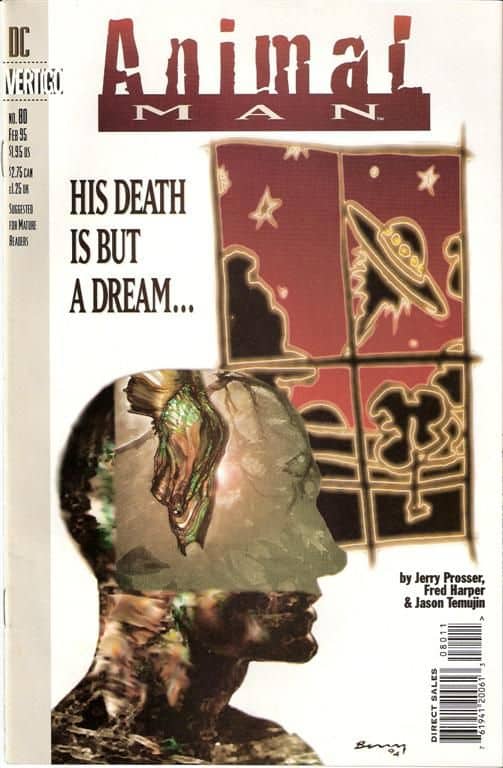 Spoilers (from twenty-three years ago)

Jamie Delano and Steve Pugh took this title to great heights, making it one of my favourite comics of the early 90s, and perhaps of all time.  Their use of character and unique vision of Animal Man’s potential made the book very memorable and special, and also helped raise my own personal awareness of environmental challenges.  When they left, I was disappointed, but was also happy to see that the title was continuing (today it would be relaunched, probably for the fourth time).

And then I started reading the new creative team’s work.  I knew writer Jerry Prosser from the Skin Graft miniseries, also at Vertigo, but didn’t remember liking it.  The new artist, Fred Harper, had drawn part of an issue of AM during Delano’s run, and was fine. Together though, they failed to impress very much.  I don’t remember anything about this run, aside from the fact that I didn’t like it, and decided to drop it. Three issues after that, the book was canceled.

I’m going to see how far I make it this time, and learn if age (both my own and the comic’s) have improved things at all.  Maybe I’ll end up hunting down those last three issues. Maybe I’ll give up before I get close. We’ll find out together… 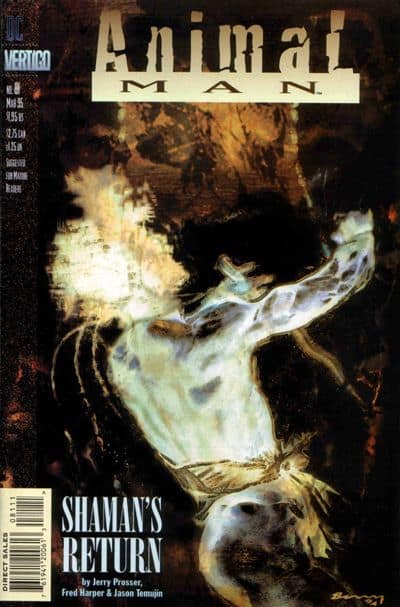 Truthfully, I’m done.  I was going to pick up the last three issues on Comixology so I could see how this run ends, but reading these last three issues has become such a slog, I just can’t be bothered.  I love meaty comics with big ideas, but when I take nap breaks to get through one, it says a lot more about how dull that comic is than about the amount of rest I’ve been getting lately.

In the mid-90s, I was reading Mondo 2000 and Wired, listening to Trip-Hop and a lot of rave music, and was as excited about the potential of the Internet as anyone.  I wasn’t taking designer drugs and dancing all night, but I did have wide-legged jeans and colourful sneakers. I recognized that mainstream comics sucked, and was fully on-board with almost every Vertigo title.  All that said, Jerry Prosser’s attempts to distill just about everything that made up the 90s counter-culture into this comic was an absolute failure. Seriously, what the hell was this book?

Prosser came in after Jamie Delano’s incredible run, wherein he developed the cast of this book to the point of them feeling almost real, and left Prosser with rich ground to explore.  Ellen was considering her feelings for both Buddy and another woman, Cliff was growing into a man who looked after his community, Maxine was coming to terms with her abilities, Annie was leading the Life-Power Church and pregnant with Buddy’s child, Buddy was dead, and Mary was growing into an all-time favourite comics character.  Also, there were hundreds of people joining the Life-Power Church, and trying to live in harmony with animals and nature, in a big commune in Montana. In many ways, a year or two of stories were just waiting to picked up right there.

So what does Prosser do?  First, he more or less jettisons Cliff and Lucy, gets rid of Mary and Evelyn all together, along with most of the Sisters Without Mercy, and decides to ignore just about every aspect of Buddy’s personal life.  He also got rid of the animals, and Buddy’s animal powers, as a focus of a comic called Animal Man. Instead, we get a TV station with shows about UFOs, levels of consciousness, and some other crap. We get long discussions of Shamanism and layers of reality, and virtual reality systems that can take you to the centre of the Earth, at a time when VR looked like a game of Tetris.  We get tons of pseudoscience, a vaguely explained threat, and characters who are complete ciphers.

Really the only thing that interested me in this run is the suggestion that Dr. Varma is working for someone else, possibly Ray Dillinger.

The strength of the Animal Man series, from Grant Morrison’s run through Jamie Delano’s, was always the relationship between Buddy and his family.  Morrison tore it apart when he had the family killed, and showed Buddy losing his mind to get them back. In Tom Veitch’s run, Buddy’s lack of connection with his abilities led to him almost losing his family, while Delano’s run was as much about him rebuilding his sense of belonging with his kids and humanity as it was about starting a church.  Even Peter Milligan’s unfortunate run was built around Buddy trying to fix his relationship with Ellen and the kids (they were from an alternate world). In Prosser’s run, that connection, except to Maxine, is severed, not for story reasons, but because Prosser had no place for them. Really, the main character of this book didn’t really need to be Buddy anymore, as there was nothing left of the character we got to know for almost eighty issues before Prosser got there. 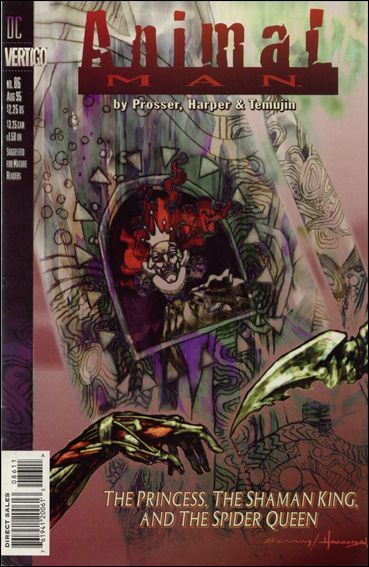 Prosser’s writing is exceptionally wordy, like a Kevin Smith comic.  He doesn’t do dialogue well, and even worse, his scientific (or is that pseudo-scientific?) explanations make next to no sense throughout.  He definitely struggled to present an ongoing story that built up suspense or reader interest.  His frequent use of alternate methods of storytelling (I’m thinking of Maxine’s storybook, and the legends of the ant and of the idea) is interesting, except that it often just becomes an excuse for information dumps and lengthier chunks of prose.

The art, by Fred Harper and Jason Temujin, is fine, if a little nondescript.  All the faces look exactly the same, and we have to look at other signifiers such as hair and skin colour, to figure out who people are.  Beyond that, there are some well-drawn scenes.  I think it’s very cool that Tatjana Wood remained as the colourist for the entire run of this series.

The covers are resoundingly terrible.  The work, by Rick Berry, is as muddied and obscure as the writing, and couldn’t have done much to help sales (despite the fact that Berry was the cover artist for William Gibson’s novels, like Neuromancer).

This brings me to the end of my look at the Animal Man.  This book was groundbreaking in many ways, as it helped build the “weird superhero” era at DC, which in turn led to the creation of the Vertigo imprint.  It helped my younger self to think about the environment and man’s place in it, and had me thinking of my own relationship to the animal kingdom (disclosure – I haven’t eaten beef or pork since ‘91, but wouldn’t give Buddy any credit for that except perhaps on a deeply subconscious level).  It’s too bad that his story ended in such a flop, but it’s not like a lot of other comics were doing any better in the mid-90s. It was a terrible time for the medium.

Buddy did return with the New 52 era (there was also a miniseries by Gerry Conway just before that that I never read), and Jeff Lemire made great use of some of the groundwork laid by Morrison, Veitch, and Delano, while tying Buddy closer to the continuity of Swamp Thing and the rest of the DCU.  It was a good run, but doesn’t qualify as “retro” just yet, so I’m going to end here.

Next time around, I’m going to be looking at a Marvel series that kind of combines the ideology of this series with the setting of another DC title I re-read back in the spring.

If you’d like to read the stories I talk about here (I can’t imagine why), you’re going to have to do some longbox digging, as it was never collected.  You can follow this link to the first issue:
Animal Man (1988-1995) 80