The show starts off with wrestling for a refreshing change, with Dolph facing Drew in a cage. Dolph hits a flash superkick for a quick 2. Drew hits a suplex toss into the cage before landing two claymore kicks and winning decisively. Drew grabs a mic and says he’s the king of Raw’s jungle – which could set him up as a King of the Ring if they want to bring that back. Drew says he’ll win the rumble and the title and then claymore kicks Dolph again. 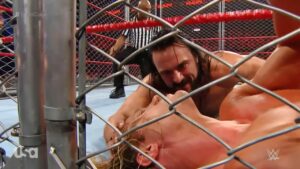 HHH and Seth talk about each day being a fresh start and that never being more true than now. He tells him that he won’t get an automatic rematch for the IC Title, which should be clear anyway since that was said two weeks ago. HHH tells him to earn his shot again by beating Lashley tonight. Shane makes a fresh start battle royal for an IC Title shot tonight. Crews wins it by taking Baron Corbin out. Ronda vs. Nattie is recapped with Nattie being respectul in defeat before Tamina and Nia Jax attack her. Corbin comes out and complains about deserving a reward – so Elias sings and a brawl breaks out.

AOP and Drake Maverick talk about AOP being tag champs again in 2019. Sasha, Bayley, and Ember face the Riott Squad. Liv lands an outside-in double stomp to the back of Sasha for 2. Sasha plays face in peril until Bayley comes in and runs wild with her comeback and then a flying Randy Savage elbow to win. Braun’s reign of destruction is shown before Lashley comes out and shows his ass before facing Seth. Lashley has one of his best matches on the roster since returning, working with a guy who can eat his plethora of suplexes and sells his spear perfectly. Rush is a perfect pain in the ass and eats a big lariat from Seth on the floor before a no contest with a chair and all the interference.

NXT call-up hype videos are shown. Jinder and the Singhs face Heath and Rhyno in a handicap match. Why this is all legal is never explained since Lucha House Party Rules were abolished two weeks ago. Jinder hits a superkick and the kallas to win. Dean cuts a promo before we get a recap of the battle royal. Crews gets his best chance to shine in years with a standing shooting star that gets 2. Dirty Deeds hits and gets the win. Alexa talks about her new talk show segment debuting next week before a Brock hype video shows off the Brock vs. Braun match at the Rumble. Ronda and Nattie face Nia and Tamina. Tamina is so much worse than Ronda is despite having so much more experience and she gets the armbar and the win.