Braun comes down and rambles a bit before saying he’s cleared and Corbin buries him and says he can’t beat Brock Lesnar. He chases Corbin backstage and Elias sings his location to Braun. Braun tears a door off the limo and Vince is pissed. Braun tries to put the door back on and Vince calls him a danger zone. He fines him $100,000 and then yells at Vince so Vince takes him out of the Rumble match. Braun responds by tipping over the limo, as you do. Ronda and Sasha team up against Nia and Tamina. Sasha plays face in peril with Nia until Ronda comes in and gets bullied into the corner. Sasha gets beaten up a bit by Nia and then Tamina while ads for Glass distract from the action. Sasha gets the crossface on and taps out Tamina. 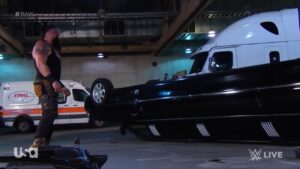 Sasha acts all heelish with Ronda and to be fair, Ronda did say that she can only show her respect by tapping her out. Nattie and Bayley try to stop their bickering and thank God they succeed, because they’re all annoying. The Riott Squad comes in and sadly doesn’t destroy picnicware but they do call Bayley a sadface emoji – and that’s a solid insult. The Revival destroys the Lucha House Party while Curt Hawkins cuts a promo in front of Vince’s office and EC3 gets no words, but the B-Team does too. Wow and then Rhyno and Heath get mic time too. Dawson hits a DDT on Metalik, but Dash shoves his foot off the rope and Corey calls it poetic justice.

Vince cuts a rambling promo and talks at double speed about who will face Brock. Vince comes out and then Cena does and says he has RUTHLESS AGGRESSION. Drew says that he is ruthless aggression and says that Cena’s time is up and his time is now. Baron and Balor come out and then they all brawl until Drew hits a claymore on Balor and Cena. Vince makes a fatal four way with all of them. Jinder compliments Vince on his suit and wants a shot – so Vince gives him a chance to face any one of the four to get into the fatal four way.

Bayley, Nattie, and Nikki Cross face the Riott Squad – and all of the NXT callups will be free agents and be on both shows. Nattie and Nikki hit a Hart attack, but Liv gets 2 off a schoolboy. Nikki hits the neckbreaker and Bayley’s macho man elbow wins it. Jinder comes out in God-awful greenish/brown gear before Dean yammers on about facing Seth and Lashley tonight. Jinder gets some token offense, but gets put down by the slingblade, corner dropkick and the double stomp. Lio Rush talks about Lashley being the man the world needs as champion because he’s a fighter. Lio cuts his best, most serious preomo ever about Lashley and this pairing works on a main event level when he’s like that – this was a win all the way around and the best hype job done for Lashley since his run with MVP in TNA.

Dean comes out and a plug for Glass leads to the Rockers breakup angle. Hard to believe that was 27 years ago. Boy does time fly. Cole talks about Lashley not being a champion in WWE in almost 12 years and Lashley being more dangerous now than before. Seth talks about being impressed by Lashley’s physique, but no one outworks him in the ring. Seth hits a crossbody for 2 on Dean. Seth gets ping ponged by the heels, but Seth gets a small package for 2 and then hits a dive. Lio uses parkour to avoid Seth before they do finally touch a bit. Seth hits a high fly flow on Lashley, but Dean shoves him out for a 2. Seth goes to stomp Dean, but Lio pulls the rope down and Lashley hits the flip spear and then immedialy cradles Dean to win – I love that he won by pinning the champion, but what a waste of a reign for Dean.

A guy knocks on Alexa’s door, which is partially open anyway and then sees her changing. The announcers give an emotionless plug to Glass because Alexa starts her talk show with the reveal of the women’s tag titles and the announcement that six teams across both main roster brands will compete for the titles in the Elimination Chamber at that PPV. The belts look better than any main roster tag belts. Paul Heyman is her guest and she calls him the greatest advocate in WWE history.

Heyman says that if need be, Brock could destroy all of the four men vying for a shot at him tonight – but why take out the whole division in one fell swoop? It could be Cena – but the foundation of Suplex City was built on his mangled body after Summerslam in 2014. Paul says he’s not a liar and he’s had his eyes on Drew for a long time – and he’s almost guaranteed to be Universal Champion, but not now. Corbin isn’t the most popular guy, but he’s kinda proactive but not a GM before Otis comes out and says random stuff. Alexa says this sin’t a moment of Otis, it’s a moment of Bliss before Tucker gets him to leave. Well that was sure a way to end things and get everyone under.

Everyone’s out for the four way and Cena takes Corbin out with a tornado DDT for 2. Drew attacks Cena and does the you can’t see me bit before Cena hits his usual comeback and the fistdrop. AA hits and gets 2 after a Corbin save. Corbin hits End of Days on Balor, but Cena and Balor eventually go at it. Balor avoids a super AA, but eventually eats it and Corbin steals the pin but it only gets 2.5. Corbin eats an AA, but Cena eats a claymore and Balor pins Cena with the double stomp. Cena puts over Finn Balor as beating him and being proud of Balor because Vince said he didn’t believe in him, but the people did. He believes in Finn Balor too and wants to see him win the title. They were a bit heavy-handed with this on commentary, but it showed that when they want to make a star, they can – and do so in one night.