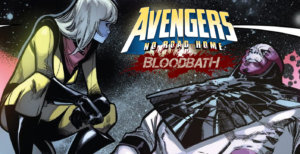 Who Are All The Legacy Marvel Heroes Killed By Nyx?! Plus Voyager, Challenger, Hercules and An All-New All-Different Tragic Hawkeye?!

…followed by a dramatis personae.

We then begin in the past where, presumably, where Avengers: No Surrender left off with the Challenger defeated looked after by his jailer the Voyager.

They witness Nyx and her horde attack Olympus…

…leading to a bloodbath that see Hermes killed…

Welcome to the new gods of Olympus?!

That spurs Voyager to assemble the Avengers leaving the jailed Challenger alone; I suspect he will play a role in this series, but what role I know not. Good? Evil? Tweener? We shall see.

We then pivot to modern day where the Avenges are having a hard time against Nyx and her horde. 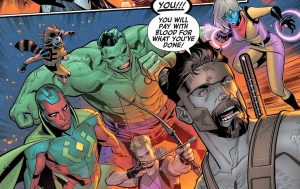 However, the Voyager seems to get a few licks in despite Nyx presumably not being able to touched by the others.

…and captures her as the rest of the Avengers are teleported back to Midgard, Earth.

…the Immortal Hulk appears ready for payback after Hawkeye arrowed his Bruce Banner persona in the head, presumably killing Banner and the Hulk, during Civil War II. That was before we all learned the Hulk was immortal.

The book ends with the teasing of next 3 issues of this weekly event mini-series.