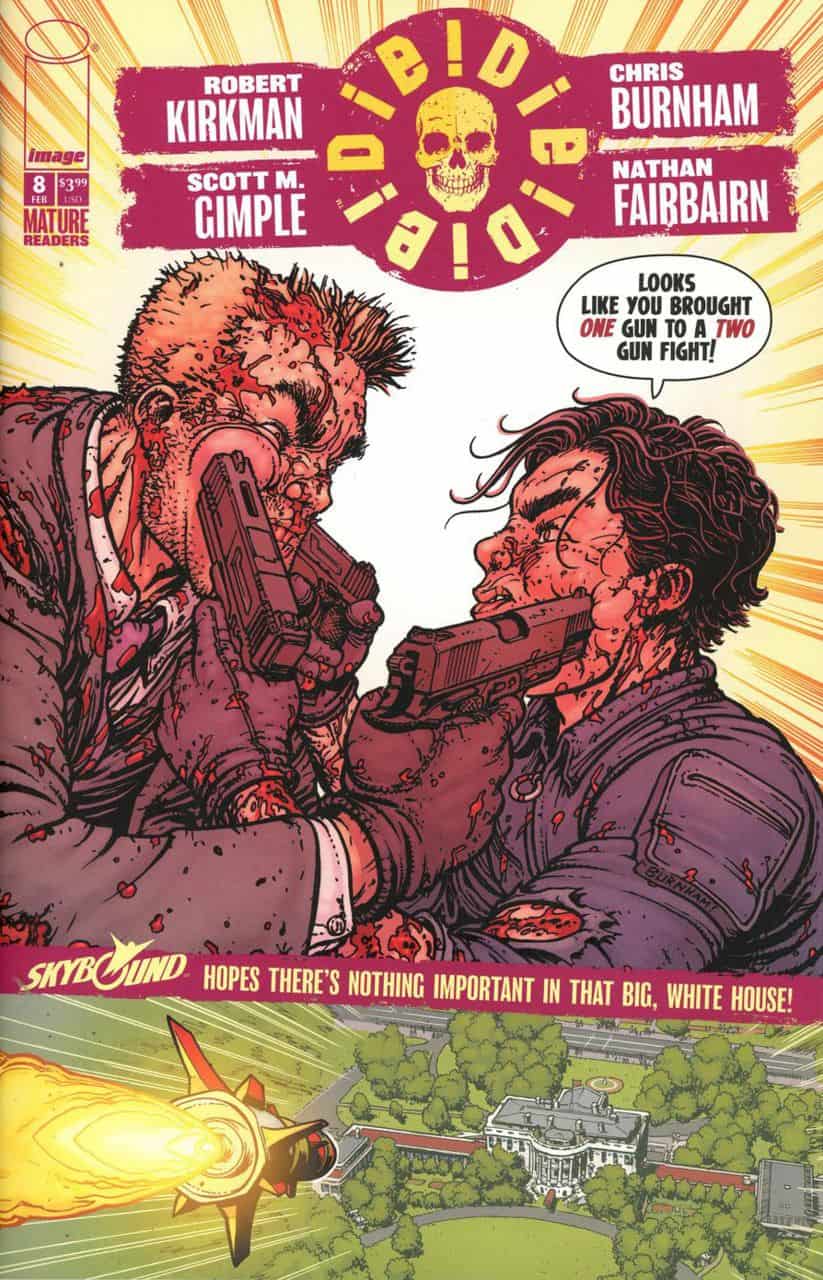 Die!Die!Die! #8 – This series has been an absolute delight.  Robert Kirkham, Scott M. Gimple, and Chris Burnham came out of nowhere with this ultra violent conspiracy theory political family drama, and never let up on the intensity or unpredictability for a minute.  This issue wraps up the first arc (I’m happy to hear that this book will be returning!) with some serious violence, and the news that Obama is still President after staging a coup instead of letting Donald Trump take charge.  All this time, I’d thought that the book was just set in the recent past… Burnham’s art in this series has just been so good – he can handle outrage as well as craft outrageous action sequences. I encourage anyone who didn’t give this a try to pick up the trade when it comes out.

Aliens: Resistance #2 – Brian Wood isn’t making this series an easy read, as Zulu Hendricks and Amanda Ripley are attempting to either figure out what Weyland-Yutani is doing with some pilfered colonists, or are trying to stop them.  Maybe I missed something, but their mission isn’t all that clear. What is clear is that Wood and artist Robert Carey are doing some cool things in the Aliens universe, without barely showing us any aliens. There is a lot of rich ground to play in, so I appreciate that. 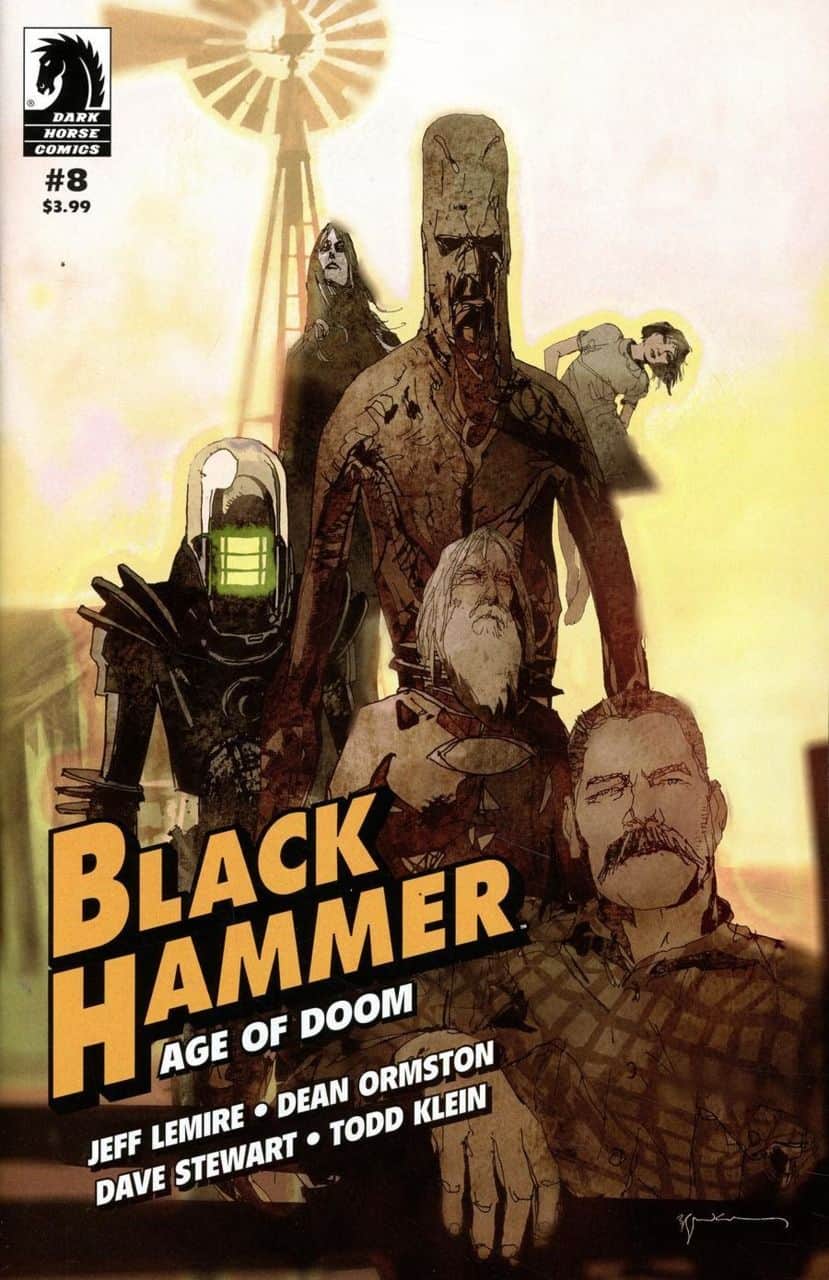 Black Hammer: Age of Doom #8 – Dean Ormston, the original series artist, is back, but it looks like Lucy, Slam, and Barbalien have found themselves in another world, where things are really just pretty bland.  The Black Hammer main series has been terrific, and while it’s become completely unpredictable, the strength of this title is its characters. That continues here.

Black Panther #9 – T’Challa and the Maroons end up on the planet N’Yami’s people are from, and learn that they can’t exactly trust all of their allies.  I’ve been enjoying the Star Wars version of Black Panther, but am also ready to see T’Challa return to Earth soon.

Captain America #8 – Ta-Nehisi Coates isn’t much hiding his view of America’s political landscape, showing things in such a way that it makes sense that the Kingpin is the mayor of New York, and Baron Von Strucker is running a black site prison for superhumans.  Cap is having a hard time being incarcerated there, while Sharon Carter proves herself the real hero of the book, running around trying to clear Cap’s name. Coates is doing an interesting job with this series, and while Adam Kubert makes some questionable layout choices, he compliments the writing nicely. 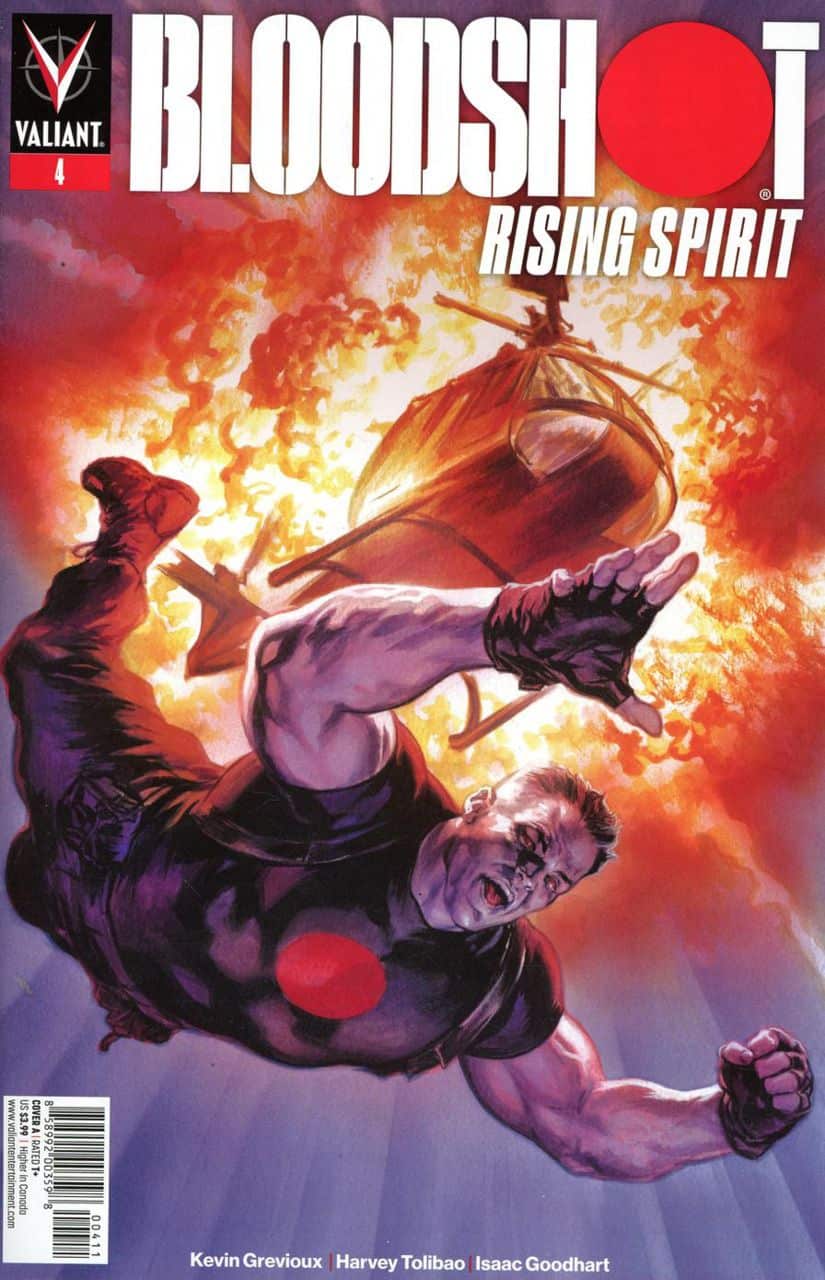 Bloodshot Rising Spirit #4 – I’d kept preordering this book under the impression that it would be written by Zac Thompson and Lonnie Nadler, but this will be the last issue I’ll be reading.  This series, about trying to implant a working personality matrix on Bloodshot, has been incredibly slow and repetitive. With this fourth issue, I finally figured out that the book is set in the past, with the HARD Corps having never met the guy before.  I’m not sure, but I think it doesn’ work within the confines of Valiant continuity, but I also don’t care. This is a very underwhelming series.

Daredevil #2 – Chip Zdarksy’s storyline has me pretty intrigued, as Daredevil is wanted by the police after a robber he gave a beat down to last issue has died.  DD is convinced that the Kingpin is setting him up to take the fall, but there is no actual evidence to support that. Zdarsky has a good feel for what motivates DD, and I think this is an interesting way to explore his character a little.  Marco Checchetto’s art is quite lovely, and I like the new police detective whose moved in from Chicago. 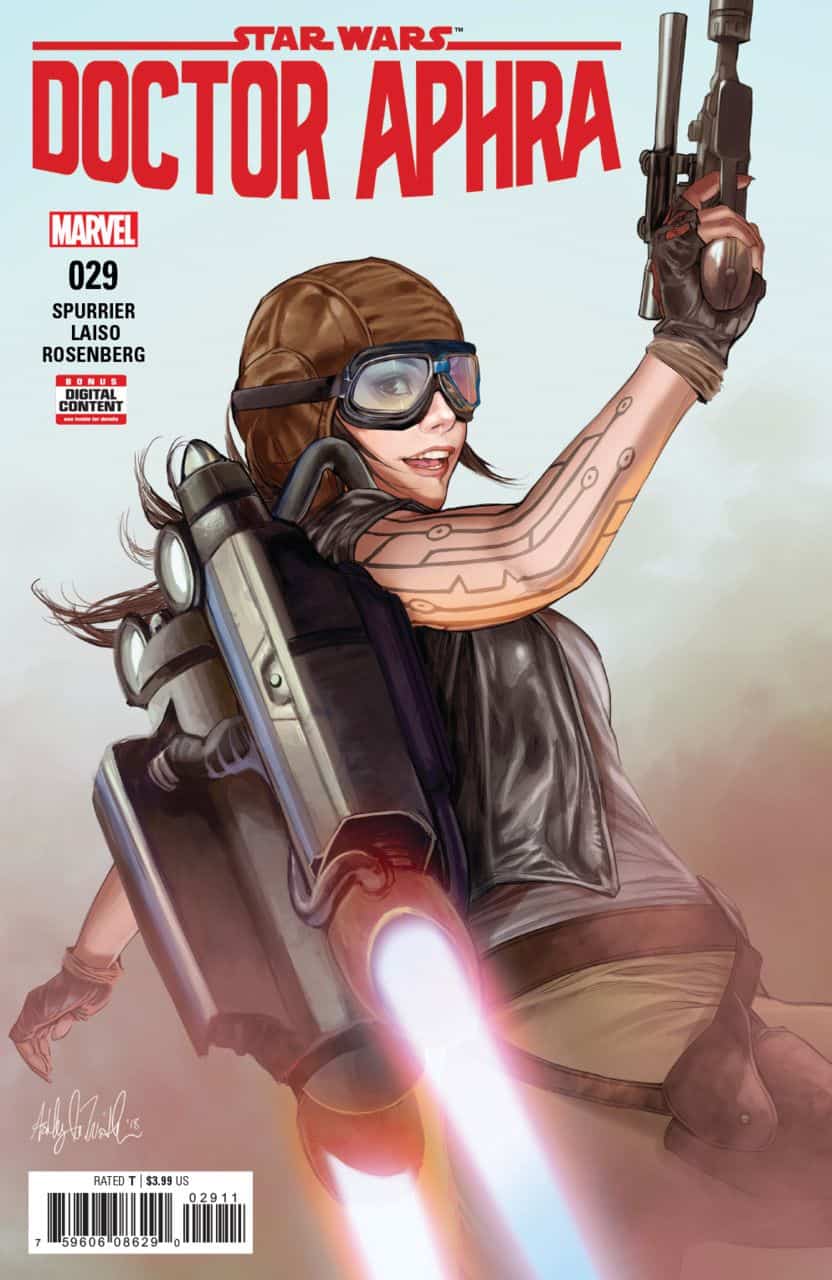 Doctor Aphra #29 – I think maybe Aphra and Trip have been on Milvayne a little too long, because I find I’m getting a little bored of their ‘will they or won’t they?’ banter and the plot permutations that keep putting them in more and more danger.  Si Spurrier has, for the most part, kept this series feeling like Kieron Gillen never left, but the pacing in this issue is a little off.

Heroes in Crisis #6 – I am officially very frustrated with the strange pacing of this series.  This issue backs us up again to the day of the attack on Sanctuary, and focuses on three characters – Gnarrk, Wally West, and Harley Quinn – who were getting treatment there.  It does reveal the person who started killing heroes, at least we think it does, but beyond that, the issue is really kind of a filler. It’s nice to see Tom King working with Mitch Gerads again, so soon after the completion of their excellent Mister Miracle series, but I’m still not that impressed with all of this.  It seems kind of directionless, and is not all that compelling. There are still three issues to go in this series, but in many ways, it feels like the story is still just beginning. 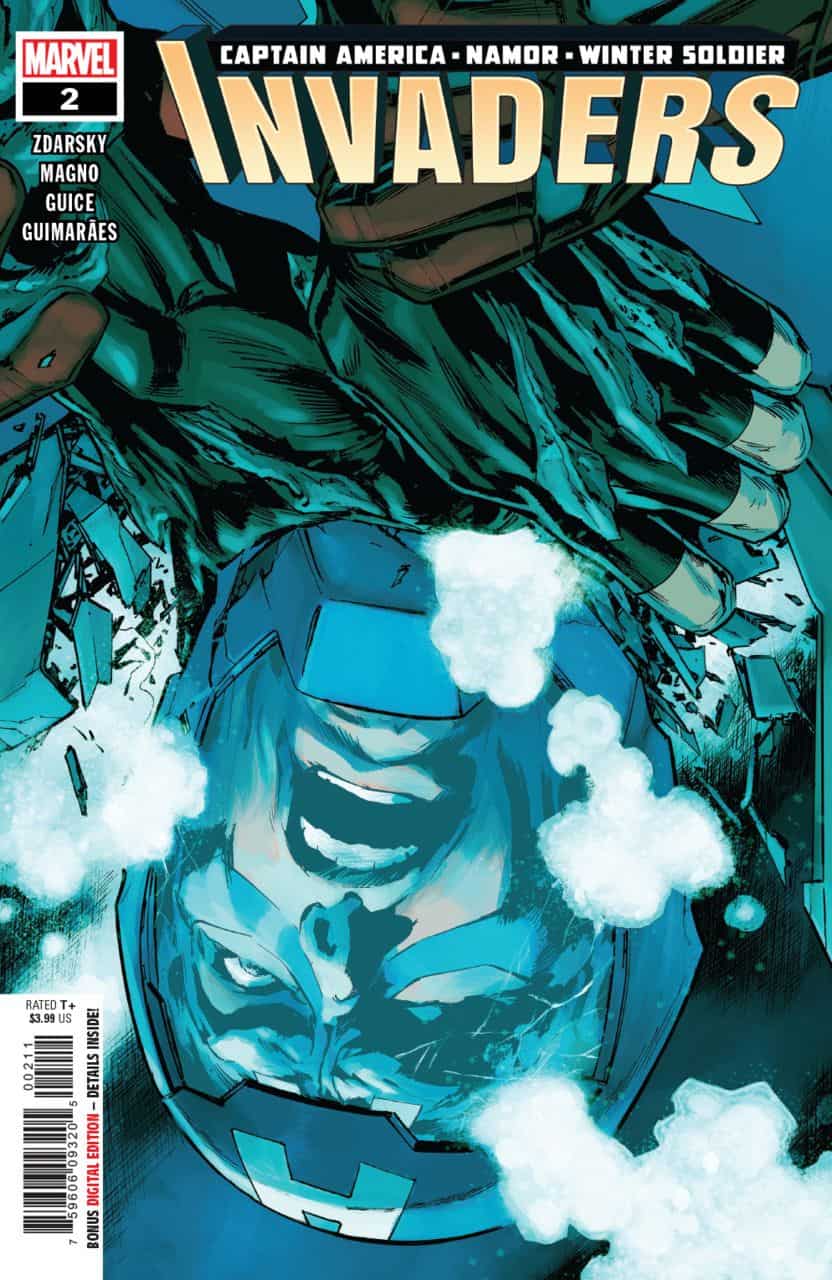 Invaders #2 – It’s a good week for Chip Zdarsky comics.  Namor’s plans are more complicated than it might seem, and so Captain America, Bucky, and Jim Hammond are looking into his activities from a couple points of view.  I’m not sure about the retconned connection between Namor and Charles Xavier, but I’m curious to learn more about it. I like the way the art is split between Carlos Magno in the present, and the always wonderful Butch Guice in the past.  This is an odd series, in that its premise isn’t entirely clear yet, but it’s got me intrigued.

Mage: The Hero Denied #15 – It’s incredibly impressive that Matt Wagner has finally finished a series that he began thirty-five years ago.  This double-sized issue brings Kevin Matchstick, his family, and his allies up against a gigantic evil, and wraps up every plotline in this volume.  Wagner is a terrific creator, and someone I’ve long admired for his Mage and Grendel comics, as well as his various corporate books. This final issue feels pretty special, and is a really solid, lengthy read.

Man-Eaters #6 – I think it’s time to stop worrying about the layers of this story that don’t really make sense to me, and instead just enjoy the ride that Chelsea Cain and Kate Niemczyk are taking readers on with this novel and bizarre series.

Outcast #39 – As we get closer and closer to the end of this series, we also get closer to the Great Merge.  It seems that Kyle’s working with other outcasts makes both sides of the war stronger, and we move ever closer to the big final confrontation.  This series stays interesting.

Peter Cannon Thunderbolt #2 – Cannon figures out that an alternate of himself is behind his planet’s problems, and figures out a novel way of transporting his fellow heroes to deal with it.  I love how much Kieron Gillen is speaking to Alan Moore’s Watchmen in this series, without being too obvious about it. This is an interesting title, and the first time I’ve seen a book of this quality out of Dynamite.

The Wicked + The Divine #42 – It’s time for a lot of truths to come out, including the secrets behind the Great Darkness.  Laura brings Baal into things, while Woden makes another poor decision. We are getting very close to the end of this series, and I find it as exciting and interesting as it was at the beginning again.

X-Force #3 – This is pretty much my favourite new Marvel series.  Ed Brisson has a complex story underway, with a lot of moving parts, but continues to focus on the characters, and how they’ve changed over the years.  Dylan Burnett’s art is fantastic – it’s a little cartoony and exaggerated, and fits perfectly with the tone of this series. I love seeing Deathlok with the team, find Teen Cable way more interesting than Classic Cable, and even find myself liking Ahab just a little, mostly, I think, because Burnett doesn’t make him look as stupid as every artist has. 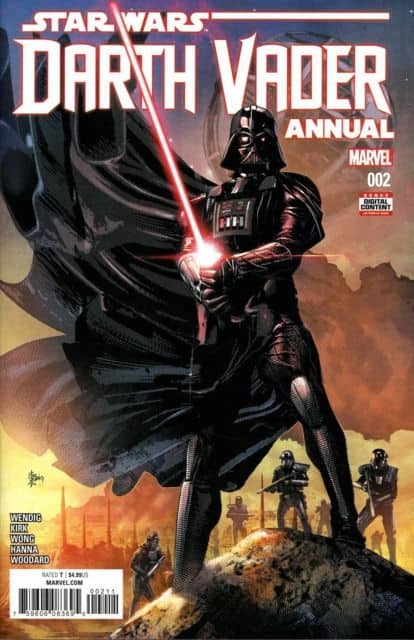 Darth Vader Annual #2 – Chuck Wendig and Leonard Kirk do a good job of integrating the backstory of the Rogue One movie into Vader’s story in this annual.  That’s kind of all it is though – although it also helps establish the rivalry between Vader and Grand Moff Tarkin. I enjoyed it.

Nick Fury #3-6 – It says something about the current comics market when a Jim Steranko-steeped series written by James Robinson and drawn (mostly) by ACO gets no real buzz.  These one-off stories that have Fury going after various Hydra operations in interesting settings are great reads. They don’t make me like Nick Jr. any more, nor do they add a thing to his character, but as exercises in layout and cool scenes, they are great.  And already totally forgotten.

Star Wars: Thrawn #6 – I found this adaptation of Timothy Zahn’s novel kind of boring, but because of my completist nature, I did want to see how it ended.  Enh.

The Wild Storm: Michael Cray #9-12 – I’m not entirely sure we needed a side series as part of Warren Ellis’s larger Wild Storm story (unless there’s a payoff I haven’t seen yet), but it was cool to see how writer Bryan Hill moved some of the main DC characters into that world, in very different way.  Hill’s star keeps rising, and I can see how this series helped with that some. It’s well-written.

The Few – I was very impressed with this nice thick trade of the series by Sean Lewis and Hayden Serman.  The Few is set in a future where the richer parts of America walled off the centre, and forgot about it, aside from grabbing resources out of it.  The book follows a woman named Hale, who escapes a massacre by the fanatical cult of some guy named Herrod, and fleeing with a baby, finds herself among The Few, a group looking to take down The Palace, the group that exerts power over them.  Hale has a few skeletons in her closet though, and has to look at where her loyalties lie, as she learns how the world really works. Sherman’s art is scratchy and sometimes hard to follow, but he makes incredible use of the generous amount of space each over-sized chapter received to tell the story in a visually very effective way.  This is a really good book that held my interest throughout. If you’re a Mad Max fan, you’d like this.