Roman’s return from last week starts the show off and then Roman comes down and says that this week in Philly is the day to take the yard back. Seth comes down and tells Roman he knows what it’s like to vacate a title and never lose it – which may actually be more blasephemus than saying that Corbin equated being GM with being harder than cancer. Roman wants the title shot, but he doesn’t mind Seth having the shot now and wishes him luck. Roman asks for a favor and says the band needs to be back together one last time and Seth’s in. Dean comes down but gets jumped by Elias. 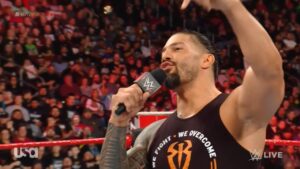 Drew says that he broke the Shield months ago and Corbin says that tonight, he and Lashley will team with Drew to face Braun, Balor, and Angle. Kurt gets the Germans on Drew and then a bunch of stuff happens. Lashley catches Balor out of the air and spinebusters him into the post before Braun bowls Lio over through the timekeeper’s area. Lashley’s flipping spear hits Balor and he beats him – wow, they didn’t beat Kurt! The trio beats up everyone after the match and double powerbombs Balor on the steps. The Ascension meets with other jobber teams to bury Otis, with Viktor calling Otis a dumbbell. Riveting. Otis says he’s sensitive and that hurt his feelings. Holy crap did thsi work at getting everyone involved under.

Nattie gets Ruby in the sharpshooter quickly, but Ruby gets a cradle and then it’s reversed to end it. Lacey Evans just walks out as “the Sassy Southern Belle” and then walks back. Flair video package recapping last week’s events airs. Steph talks with the SNL guys about tonight and WM before Steph talks about The Audience and The Superstars of WWE’s multi-layered world. Batista cuts a Skype promo saying he could be at Raw – he doesn’t have any other obligations, but he just doesn’t like Philly. And he’s definitely not afraid of HHH, but maybe he’ll show up at the PPV. Or maybe he won’t – the game’s being played by his rules now.

HHH says he stood by Ric Flair during his best days, and Richard Fliehr on his worst days – including when he buried his son. Ric was by his side during his wedding and unfortunately, HHH couldn’t make it to all of Ric’s weddings. He wanted to celebrate Ric’s 70th birthday because he deserved it and he wasn’t even supposed to make it to 70 after his near-death experience. He wanted Richard Fliehr to be Ric Flair, the Nature Boy one more time – but that didn’t happen because of Batista. Dave quit before because he didn’t get what he wanted, so he beat up a 70 year old man who is lucky to be alive so Big Dave wants to go Bad Guy 101 on him. Couldn’t done without that smarter than thou bit, but this build is great so far. He wants Dave to tell him what he wants and he’ll give him all that he wants.

Steph says that Becky’s 60 day suspension is lifted, but she isn’t physically cleared but she will let her sign a hold harmless agreement for Fastlane when Becky faces Charlotte for the Raw Women’s Title. So Charlotte’s now on Raw despite being on SD. Seth and Dean chat a bit in the bowels of the building and Dean says he’s gotta stay sharp. Ascension, Hawkins and Ryder, Heavy Machinery, and the B-Team have a match to determine the king of the jobber teams and Heavy Machinery wins the match with the worm elbow drop.

SNL guys meet with Titus, who only wants to get one selfie and leaves to get a cheeseteak before taking another photo. The SNL guys are baffled by No Way Jose and his posse. Torrie Wilson HOF video airs hyping her up as the most downloaded SmackDown superstar on WWE.com in her heyday – which is an astounding thing to even put in a video package. Charlotte cuts a cocky promo in way too much makeup and says that Becky. Is a. One-legged. Competitor in. An ass-kicking contest. Seth and Dean chat a bit and Seth says that they always respect each other and they’re wrestling soul mates no matter what. Dean appreciates the help, but he’s gotta do things on his own.

Dean has a nice back and forth match with Elias that Elias wins with Drift Away. I like that the undercurrent of this losing streak is that Dean is lost in the sauce a bit and really does need the brotherhood to feel whole. Roman and Seth come down to help him, but Deean leaves disgusted at himself. Drew, Corbin, and Lashley talk about ending this instead of just ending it. The three beat up Roman and Seth before Dean comes in and the Shield runs wild and end it wth a fist bump.

Aliester Black and Ricochet face the Revival for the titles tonight. The Shield vs. Drew, Lashley, and Corbin is announced for Fastlane as the final Shield match ever. Tamina knocks Sasha out with a superkick and beats her. SNL guys chat with Braun and Braun throws one of them around to prove it’s real and Bruan quotes Dr. D with John Stossel. The Revival and their track jackets get no intro. Ricochet shines brightly before Roode and Gable jump the Revival to force a DQ. Becky and Charlotte sign their contract before Ronda returns in new Rowdy yoga pants complete with a tartan design on the side. Steph gives her the title back for some reason and makes Becky vs. Charlotte not for the title, but for Becky’s chance at WrestleMania. If she wins, she’ll be added to the title match at WrestleMania in a triple threat. Ronda rants and says damn the Man and screw the Woo. It’s no more Mrs. Nice Bitch and she runs wild and slugs away at Becky and gets the armbar. Stephanie says that no matter what happens at Fastlane, we’ll get a great match at WM.