Heyman and Brock come down to start things off with Heyman putting over Brock’s many accomplishments. Paul says that Seth finds himself to be a suplex city-burning superstar, but he isn’t. Drew talks about taking out Seth’s fallen brother and telling Heyman to find Brock a new opponent for WM – because he’s taking Seth out tonight. Seth jumps Drew from behind with a chair – what a babyface! Lashley and Lio come down and Balor calls Lashley baldie and says he’ll team up with Braun tonight against them.

Braun massacres Lio for a while and poor Lio gets tossed around a ton. He goes for the powerslam, but Lashley hits a spear and then Balor double stomps Lashley after a takedown. Lio lands the frog splash, but Braun kicks out and Lio knows he’s a dead man scampering. Braun goes to attack Lio, but Lashley saves Lio and then Braun chucks Lashley into the timekeepers area. Lashley leaves Lio to the wolves to once again maybe break them up. 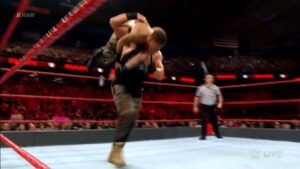 Ronda and Travis Browne arrive and Alexa is with Elias, who will be the musical host of WM. No Way Jose jumps him in his own conga line. This of course leads to a match and Elias destroys him with Drift Away. Kurt Angle announces that he’ll face Baron Corbin at WrestleMania before his farewell tour continues with Chad Gable tonight. Gable is out in his American Alpha jacket and in a USA singlet. Chad is the best overall opponent Kurt can have right now, so it’s good to see this match at least happening once.

Chad and Kurt work on the mat with a lot of armwork and then some legwork. Gable gets 2 off a victory roll. Angle hits the rolling Germans. Gable pays homage to Kurt by missing a moonsault and he taps Gable out with the ankle lock and kneebar. Corbin says that Kurt’s career doesn’t matter, all they matter is that his last match will be against him. Crews, the Revival, and Corbin are backstage and Crews baits him into a match. The Revival says even they don’t like Corbin.

Beth and Nattie come down and say that Nia and Tamina awoke the dragon and she would love to accomplish her dream of winning tag gold with Nattie. She wants to step out of retirement…again for like the half-dozenth time and wants a tag title shot at WrestleMania. We get a dreadful brawl before Sasha vs. Nattie happens. Nia interrupts and says she’s the prettier version of the Glamazon and Tamina beats up everyone.

Mojo yammers to himself about hating the word potential if you don’t do anything with it. Ricochet defeats Jinder Mahal, who dominates for a bit with an armpit lock before losing to a 630. A Ronda Rousey ass-kicking video airs before Dana says she’ll become champion. Ronda knees her and gets the armbar for the quick win. Ronda beats her up and then beats up goons until Travis Browne pulls her away. Corbin faces Crews and gets a chin and armlock on for a while before going for the End of Days, but getting cradled to lose.

An HHH-Batista video airs before Batista says that HHH has talked down to him for years. He says that HHH is jealous of him achieving success outside of WWE and now he’s using that to get what he wants. Cole talks about HHH being fair to him for over 20 years – so I guess he forgets being bullied by DX. He tells them to get out of his office after saying he’ll end HHH’s career. Braun talks about destroying the SNL guys and Alexa says that as host, she can’t have that happen and asks for a week to make it right.

Drew tells Roman to look at his wife and kids because they know that he’ll destroy Roman. Drew and Seth have a nice David vs. Goliath-style match with Drew destroying him with physicality. An inverted Alabama slam gets 2. Drew goes for a super white noise before Seth goes for a buckle bomb, but collapses. Seth hits the superplex and falcon arrow, but Brock’s theme hits after a superkick to the gut. Brock and Heyman come down and Drew wins off a Claymore.