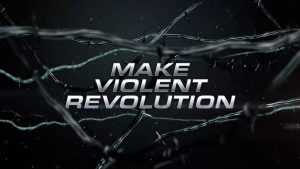 Ah, Money in the Bank, that glorious multi-ladder insanity that we have all grown to know and love is back for its 2019 iteration. I still think the best one was the first one, at Wrestlemania XXI, because it was so fast and innovative. But, then again, I am old enough for the Wrestlemania X ladder match to be the first ladder match I saw ever, and thinking that was insane… and, surprisingly, it still stands up even today.

Unfortunately, ladder matches have become such an ingrained part of the pro wrestling landscape that they very rarely have the gravitas they used. Same with the cage match, and the Hell in the Cell by extension. These things used to be used to blow off huge blood feuds. Now they are almost passé. Shame, but that’s cool. These things evolve. The table match is a slightly different sort of match as well, used to sort of intensify a feud nowadays, instead of something different to end one.

My favourite match type, though, was the traditional WCW WarGames match. Some of the early ones – all blood and pain – are amongst my favourite matches ever. I miss these. You know, I could even handle the Lethal Lockdown matches from the old TNA, as I also didn’t mind the occasional garbage hardcore match, though I felt that trope was overdone at a few points in recent wrestling history. So, yes, as well as straight-up wrestling matches, I do like some of the special stipulation matches.

Now, I know I have said that I want these columns to be a little more positive than the usual online vitriol that comes when talking about… well, anything, really. But this time, sorry – this is about those match types I never want to see again. I’ve picked 5 that I’ve seen in the past and hope they never make a comeback. And this is match types, not matches. Considering the worst match ever involved 2 rookies in a pub here in Adelaide, that would be very unfair. No, this is more encompassing.

And this is not a knock on the participants. They often put in the effort needed – it’s the match type itself. Oh, and one-off matches I’m ignoring, so no match on the back of a moving semi-trailer filled with hay. What? Yes, it happened. It was the King Of The Road Match between Blacktop Bully and Dustin Rhodes, Uncensored 1995.

Yes, this was a thing that happened. On a PPV.

If you want to know about the scaffold match, ask Jim Cornette who blew out a knee in a fall from a scaffold when Ray Traylor didn’t quite catch him in 1986… and he was just the manager. Watching 2 or four guys on top of an unstable structure try to wrestle without killing themselves, then taking a stunt-man bump to something below them is not the most riveting experience for the viewing audience. They could, like in the match between Tommy Dreamer and Brian Lee, land on a huge stack of tables (which is safer because each table slows your fall), or like Vic Grimes and New Jack in ECW, land on concrete, with Grimes, a very large man, landing right in New Jack’s face. But generally you get the Torrie Wilson/Shane Douglas v Billy Kidman/Madusa match where most of the participants are too scared to even stand properly. Dull match, stupid high risk, and not worth it for anyone involved.

Sometimes also called a bullrope match. Look, some are great spectacles – Valentine v Piper in a dog collar match is awesome, but they had a chain – but generally it’s just two guys tied together by wrists or necks or something whipping one another. And if they add the stip that you must touch each of the four corners in order, it becomes rather dull indeed. In the old days they were generally quite violent and blood-filled, but it was just not an exciting spectacle. Valentine/Piper excepted, of course.

The point of this match is to get a thing off a pole, which you can then use against your opponent, or it’s a contract or something, which then ends the match. Thankfully, the ladder matches have taken over because there was nothing more boring that watching two guys go at it in order to climb a pole. It’s just awful. And the things on poles are so varied, from chairs to rolls of coins to brass knuckles. However, the less said about the “Judy Bagwell on a Pole Match” (Judy being Buff’s mother, the pole being a forklift… and, yes, I wish I was joking), the better. And who can forget the Tank Abbott/Big Al jacket on a pole match that ended with a knife being pulled?

WCW New Blood Rising 2000, Judy Bagwell on a forklift looking like she’d rather be anywhere else… much like the audience

Depends on if the participants are male or female, the object is to strip your opponent of his/her clothing. A bra and panties match is another female variation where the woman needs to be stripped to her underwear (duh!). Wrestling moves don’t matter, just ripping at clothing. I’ve heard some people defend the women’s matches as a bit of harmless fun, giving the audience t&a. Well, objectifying women is not anything we should be encouraging, and this is just an excuse to demean a few female athletes. For the males… considering most wrestle in trunks it’s basically stripping a man to his wrestling attire, and for much of the audience (not all), that doesn’t mean much. And the less said about the Brisco/Patterson evening gown match (two men, by the way), the better. On the whole, it’s generally just a dull, stupid match.

WWF Raw, Jan 9, 1995, Harvey Wippleman v Howard Finkel in what was one of the worst “matches” EVAH!

WWF King of the Ring 2000, Brisco & Patterson… in what was also one of the worst “matches” EVAH!

This is the sort of match where either (a) the ropes are wrapped in barbed wire or (b) the ropes are replaced by barbed wire. It also often includes barbed wire weaponry because, you know… blood. Sure, I know lots of hardcore fans who think they’re awesome, but the matches tend to end up with two guys trying to avoid running the ropes, so the moves are all dull holds as the wrestlers try to push or force one another onto the barbed wire, followed by generally subdued weapon shots. Yes, there’s blood, and yes, it’s different, but, no, it’s not good “wrestling”.

TNA Against All Odds 2008, Abyss drops Judas Mesias onto the barbed early in the match

Now, you might like these 5 match types. Good for you, awesome. But I don’t think they belong in wrestling in this day and age, and I don’t like the vast majority of examples of them I’ve seen. Let them stay as strange curiosities of wrestling history and be happy with what we’ve got.

So… agree, disagree, in the middle? Comments always gratefully received.