The book opens with a storyline catch-up and creators’ credits page.

Readers than learn of the three-pronged battles; Kraven Sr. vs. Spider-Man… 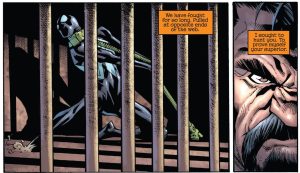 …Kraven Jr. vs. the Lizard… 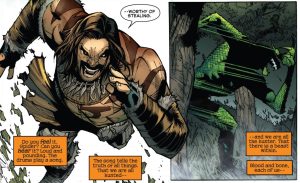 …and the Kraven robots vs. Vulture and the animal-themed predominantly villains “prey”.

…and reveals that they aren’t much different; based on decisions Spider-Man has made, noble or pragmatic or not, there is unintended death on his hands due to that decision.

Kraven then has Arcade reveal his mission; essentially if Spider-Man kills Kraven this is all over.

…and the Vulture declares victory due to Kraven’s change in orders to Arcade; he’s freed the clients from being trapped connected to the Kraven robots. That means the Vulture and the others are free!

Kraven explains that Spider-Man gave him the gift of knowledge; compassion is a strength not a weakness.

He won’t hunt again, Spider-man has his word. Plus, only the Spider can kill Kraven.

Kraven Jr. confronts Spider-Man, as Kraven Sr. seems to be evoking the end of the classic Kraven’s Last Hunt.

…and kills himself; only a Spider can kill Kraven after all.

However, turns out that there are a lot more Kraven Jr.’s out there…