Roman comes down and then Shane says he’s going to tap him out on Friday. The Revival comes down to back Shane up and it’s time for the Bloodline vs. The Revival and Drew. Superkick to Wilder leads to a Superman punch that sends him on Dawson on the floor. Claymore on the floor to Roman Shatter Machine on the floor leads to a claymore on an Uso to win it. Shane spears Roman and does his goofy taunt. Seth comes down on Miz TV and then Brock comes to the building with the regular case and not the Beast Box because that was entertaining.

Lars brawls with the Lucha House Party, who sends him packing. Boy does this not help Lars. The IIconics insult Nikki and Alexa before Alexa tells them they should stick to eating blooming onions. And then the IIconics do their pose and Alexa shows off her new coffee-centric shirt, which is great. Nikki says she considers Alexa a friend and Alexa seems like a reluctant babyface here. Becky Lynch cuts a promo on Lacey and mocks her accent and Lacey says she isn’t to be messed with. 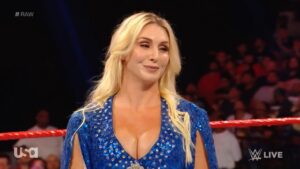 Charlotte comes down and Lacey says that she’s strutting here like a peacock because she’s a daddy’s girl. Weren’t they just friends? Charlotte brags about being over halfway to the point of beating her dad’s 16-time record. And she will do that, and it will mean nothing because Ric drew more for a regional group facing a local star once than she has yet. This leads to Lacey vs. Charlotte and they have a series of awkward exchanges, including some bizarre clubs against the ropes. Double-down off crossbody blocks leads to Becky pulling Charlotte out to attack Becky. Manhandle slam to Lacey and we get a Taker debut video sponsored by Liberty Mutual.

Rey gives the US Title back to Joe and Joe chokes him out. Braun vs. Lashley in an arm wrestling content…for some reason is hyped and they show Braun from the back, revealing a thinning hairline. Lashley throws chalk at Braun and they brawl and Lashley hits the running powerslam to Braun. Truth’s title loss via social media is shown and Spud and EC3 chase Carmella to get to Truth. Nikki faces Peyton and Alexa gets shoved on her butt on her coffee in white jeans before Nikki destroys Peyton with the rope-assisted Twist and Shout. Alexa comes in and dropkicks Billie and DDTs her wearing both belts. Give Nikki and Alexa the belts – they’d be fun as champs.

Brock and Corbin jibber jabber for a while and then Seth gets hit with End of Days. Brock comes out in as leeveless shirt and ball-shots Seth and chairshots his back to death. Brock beats him up more and Paul begs for a cash-in, but Brock denies it. Becky is back there with them when they load him into the ambulance because this is real and all – he’ll be taken to a Local Medical Facilitiy after being beaten up by The Beast according to Cole.

We get THE BEST Firefly Funhouse bit with Bray being wacky about exercise. Bray talks to Huskus the Pig about his chocolate. Then Vince as the Devil comes in to do the Muscleman Dance with Bray. HHH comes out and then Randy comes out and HHH says they’ve said everything they’ve needed to say over the past 20 years and it’s been a while since they’ve been in the ring, and he’s coming to Jeddah to kick his ass. Randy tells him to get his balls from Stephanie’s purse before facing him. They both crack up at that and HHH looks a billion years old laughing. HHH says that it’ll be tough because they’re really big – but he’ll try to put them in an overhead compartment and Randy doesn’t have any, so he wouldn’t know.

Cesaro faces Ricochet and loses to a satellite schoolboy cradle. “THIS IS A VICTORY THAT CAN CHANGE CAREERS!” Then Cesaro kicks his ass to kill his heat. Truth and Carmella come down and she superkicks Spud and then everyone chases Truth to sixth street. Taker comes down and talks about facing Goldberg for the very first time. This Friday, we’ll get the answer to 20 years of questions. He doesn’t want Goldberg the family man, HE WANTS THE MYTHICAL ICON GOLDBERG! If he brings anything but his best, Taker will send him to Hell and he’s next. Taker cut a hell of a promo there – they didn’t do much to build this match, but didn’t need to.