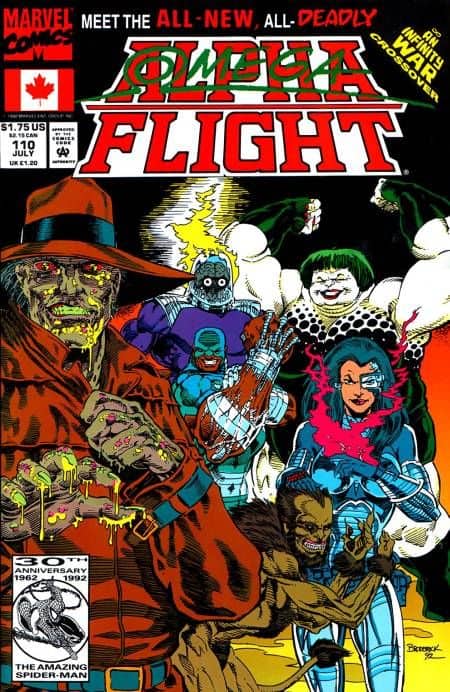 Spoilers (from twenty-five to twenty-seven years ago)

I was disappointed with Scott Lobdell and Tom Morgan’s brief run on Alpha Flight, but my loyalty to the title forced me to keep going with it. When Simon Furman and Pat Broderick came on, I remember being hopeful, but their joining the title happened just as it crossed into the Infinity War event, which I remember not liking.  I don’t really remember what happened in these comics, but I do know that I dropped it within the year, along with a ton of other Marvel books that I’d just had enough of.

Now, of course, the completist in me has me wanting to get the issues I’m missing, and I’ve found a few since starting this lengthy reread.  Will I want to fill them all in? I guess we’ll find out as we get closer to the end of this column.

When he took over the book, I think I generally associated Simon Furman with Marvel’s British comics, where I believe he wrote Transformers and introduced Death’s Head to the world.  He was a general unknown. Pat Broderick I knew from his Firestorm and Micronauts runs, but I don’t think I was much of a fan (I’ve come to appreciate him a lot more now). Needless to say, I wasn’t excited by this takeover. 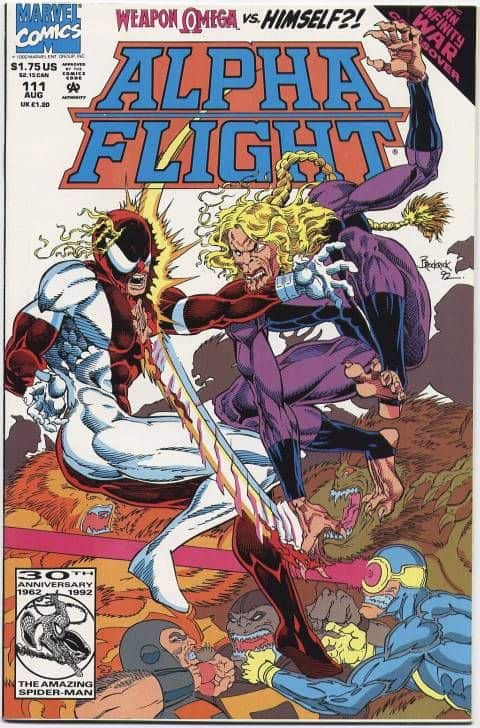 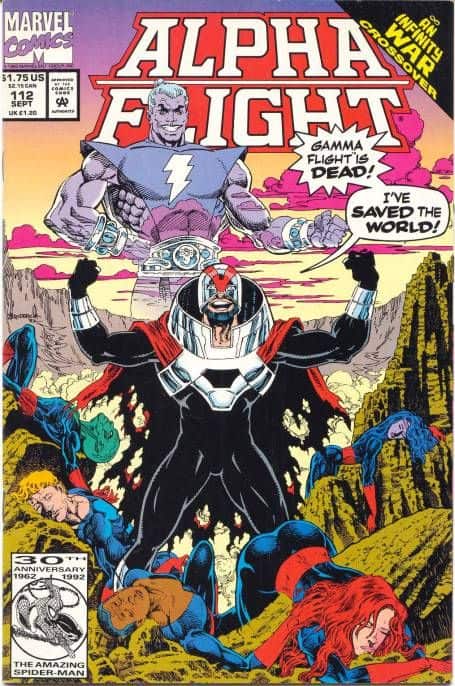 This was not a good run at all.  It looks like Simon Furman tried to keep the superheroic big team dynamic that Fabian Nicieza attempted going, but just couldn’t pull it off, leaving out such annoying things as characterization and coherent plot development.

From the beginning, Furman was hampered by the Infinity crossovers, with Infinity Wars messing up his earliest issues, and then Infinity Crusade effectively taking over the book for months, even when it wasn’t labeled as such.  Those stories interrupted the flow of what Furman had going on, I assume, or he really had no plans for this title, and was just moving along as it suited him.

There were good ideas behind this book.  I liked the examination of Witchfire, and her connection to Belasco, but it was very poorly handled.  We never got any sense of her as a character, and Furman had to rely on characters’ claims of friendship to get us through the story, as we never actually saw Witchfire and Manikin, for example, becoming friends.

The main characters were little more than archetypes throughout this run.  Heather had doubts, and probably got the most spotlight, but everything about her felt flat, especially when compared to how she was shown back in Byrne’s, and even Mantlo’s, days.  Sasquatch turned out to be Jewish and struggling with his faith, but none of that felt very important. Puck was just there, as was Northstar, until the very end when he suddenly found a voice again.  Aurora kept manifesting new powers, but her mental health issues got swept aside. Windshear might be the least developed character in comics history, followed by the rest of Beta Flight. I’m still not sure who this Albert Louis guy is, and why we should care about him, but he became a recurring plot point.

I didn’t like the way Furman handled Shaman.  He just turned up, disappeared, and turned up again, portraying almost no personality.  As well, for long stretches, the artists (or maybe it was longtime colourist Bob Sharen, who should know better after being on this book for years) kept showing him in a shoulderless bodysuit that made no sense whatsoever.  As well, his doubts and relationship with his daughter, Talisman, is finally resolved in such an off-hand way as to have no real weight to it.

And then there’s Weapon Omega/Wildheart and Wyre.  The desire to create characters that might compete with Wolverine and Deadpool is so palpable that its no wonder that it fails utterly.  These characters are boring. Having Kyle become a full person, with full, flowing locks, renders him plot-impotent and boring. I feel like by the end of it, Furman knew that, and sidelined him significantly.  Wyre is a weird Cable figure who just never worked for me. He has cybernetic wires that come out of his shoulders and back to attack people in front of him. How is that a power set? His history (along with Nemesis’s) was not explored enough, but also didn’t really interest me. 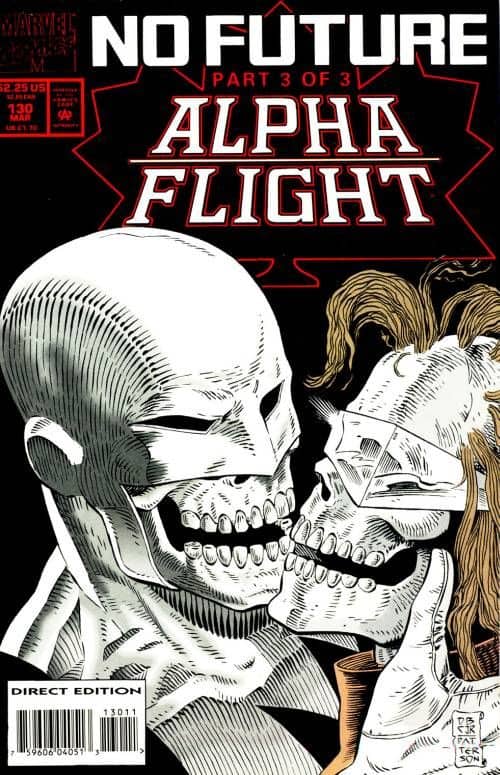 Furman threw a lot of odd story elements into his stories, such as having Nemesis run a pack of Warriors-like Children of the Night, or having Mad Dog hanging around Toronto for no good reason, just to disappear again.  Plot elements are introduced and never explored, and I don’t believe it’s just because the book got canceled.

This was endemic at Marvel in this era, and it comes down to terrible editing.  Likewise, the art in this run is pretty sloppy. Pat Broderick was a much better artist before this, and I have fond memories of his work on Micronauts, and Firestorm.  Here, it didn’t even look like he was trying to emulate the Image style, so much as he was rushing and half-assing his way through things. It’s obvious he’d never seen Byrne’s drawings of Sasquatch before.

Dario Carrasco Jr. was actually not as bad as most new artists debuting at the time.  His stuff is a little rough, but easy to follow.  I think it’s hilarious that when we saw Mac back in the classic Guardian battlesuit, Carrasco added buckles to the gloves.  So 90s.

I hated the general look of the team at this time.  The uniforms that were introduced in Lobdell’s run were terrible, and the new looks for Beta Flight and Wildheart were not much better.

It was sad to see Alpha Flight go out like this, with Mac returning from the dead for the third time (as a story element, if only for the second time in actuality), and the government making yet another big change in its relationship with the team.  Also, with them facing the Master. It was like Furman was checking off items on a list of requisite Alpha Flight tropes. I’m glad I dropped this book when I did, and feel like forcing my way through the last year of the title was something I could have done without.

It would be three years before Alpha Flight returns in their own book, under Steven T. Seagle, but the industry underwent some big changes in that time, of a more positive nature, and I remember being fond of where it Seagle took it.

Before we get to that though, I’m going to torture myself for four more days, and read the Northstar miniseries that followed immediately on this book’s cancellation.  I’ll bet you can’t wait.

If you’d like to read any of the stories I talk about here, you’re going to be looking through some dollar bins.  They’ve not been collected (and really, never should be).