While Arrow Video is only releasing three titles for August, odds are you will rewatch them plenty of times. First is Alice, Sweet Alice a slasher film that starred Brooke Shields in a Janet Leigh, Psycho role. The movie ran a while ago as part of Cinema Overdrive and kept the audience’s attention with the tale of a little girl who gets murdered before her first communion at a church. There’s a suspicion that the girl was murdered by her older sister. But no proof to hold her as the killer that wears a yellow rain coat and a Halloween mask. The film has a great creepy Tri-state vibe with a disturbing landlord and other local color that makes you think the killer might not be the worst person on the screen. Alice, Sweet Alice was given a re-release when Brooke Shields became a bigger sensation in Pretty Baby, Blue Lagoon and those Calvin Klein jeans.

On the other hand Cruising is all about the leather pants. Al Pacino Once Upon A Time In…Hollywood is a cop that goes undercover in the gay scene of New York City looking for a killer. Al ends up going deep undercover wraps up in leather, white tanktops and colored handkerchiefs to fit in with the crowd at the underground nightclubs that will scare your Great Aunt Anna. Even though director William Friedkin had to edit the film to meet an R-rating, it’s still edgy as Pacino’s cop loses himself in the scene and seems to question a lot about his life including his girlfriend (Raiders of the Lost Ark‘s Karen Allen). The film was controversial when it was released in 1980 and can still start an argument.

Sometimes knowing about a director’s background doesn’t prepare you for his film. Akio Jissoji directed several of the orginal Ultraman episodes. If you’re a fan of the Japanese alien monster series, you are not going to get any guys in rubber suits in his The Buddhist Trilogy. These three films and a bonus fourth feature are adults only. This Transient Life has a brother and sister that are defying their father’s wishes. The brother has grown fascinated with Buddhist sculptures. The sister refuses to find a husband. Their relationship gets complicated one evening in a way that was never a plotline on Ultraman. Mandara focuses on a cult that doesn’t believe in consent. Poem is about a houseboy. Jissoji’s work rarely played outside of Japan so this is a retrospective in a boxset that you can bring home.

Arrow’s August lineup is low in quantity, but high in quality with three new titles coming to Blu-ray that every collector will want to make part of their collection. Things get started on August 6th, with Alfred Sole’s attempt at crafting a Hitchcockian thriller with his classic slasher, Alice, Sweet Alice. A young girl is brutally murdered by an unknown lunatic in a bright yellow rain coat and a freakishly creepy translucent mask. As the killer continues to strike again and again, the young girl’s parents are forced to consider this gruesome reality – perhaps the killer is their eldest daughter, Alice. Ranked #89 on Bravo’s 100 Scariest Movie Moments, Alice, Sweet Alice features kill scenes that are shocking to even the most hardcore slasher enthusiasts. Fun fact: the film marks the screen debut of future Flower Shop Mystery star, Brooke Shields.

The final Arrow release for the month, also hitting shelves on August 20th, is a collection of Akio Jissôji’s films – This Transient Life, Mandara, and Poem – that make up The Buddhist Trilogy. These three New Wave films made for the Art Theatre Guild take a controversial and shocking exploration through faith. As an added bonus, Jissôji’s 1974 feature It Was a Faint Dream, a film that touches on similar themes as the trilogy, is included.

As per usual, each release this month features a High Definition transfer, including a new 4K scan for Cruising, and plenty of special features to keep you entertained well after the credits roll. 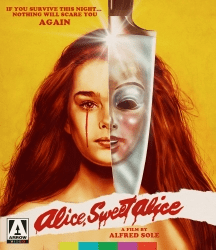 Alice, Sweet Alice
If You Survive The Night… Nothing Will Scare You AGAIN 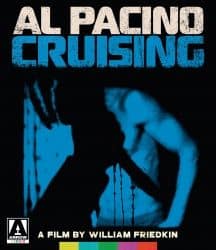 Cruising
Al Pacino is Cruising for a killer.

Academy Award-winner William Friedkin (The Exorcist, The French Connection) directs Al Pacino as an undercover cop pitched into New York’s seedy underbelly in Cruising – available for the first time on Blu-ray in a brand new director-approved transfer. New York is caught in the grip of a sadistic serial killer who is preying on the patrons of the city’s underground bars. Captain Edelson (Paul Sorvino) tasks young rookie Steve Burns (Pacino) with infiltrating the S&M subculture to try and lure the killer out of the shadows – but as he immerses himself deeper and deeper into the underworld, Steve risks losing his own identity in the process. Taking the premise and title from reporter Gerald Walker’s novel, Cruising was the subject of great controversy at the time of its release and remains a challenging and remarkable movie to this day, with Pacino’s haunted lead performance as its magnetic centrepiece.

Akio Jissôji created a rich and diverse body of work during his five decades in Japan’s film and television industries. For some, he is best-known for his science-fiction: the 1960s TV series Ultraman and 1988’s box-office success Tokyo: The Last Megalopolis. For others, it is his 1990s adaptations of horror and mystery novelist Edogawa Rampo, such as Watcher in the Attic and Murder on D Street. And then there are his New Wave films for the Art Theatre Guild, three of which – This Transient Life, Mandara and Poem, forming The Buddhist Trilogy – are collected here.

Winner of the Golden Leopard award at the 1970 Locarno Film Festival, This Transient Life is among the Art Theatre Guild’s most successful – and most controversial – productions. The film concerns a brother and sister from a rich family who defy the expectations placed on them: he has little interest in further education or his father’s business, instead obsessing over Buddhist statues; she continually refuses a string of suitors and the prospect of marriage. Their closeness, and isolation, gives way to an incestuous relationship which, in turn, breeds disaster. Mandara, Jissôji’s first color feature, maintained the controversial subject matter, focusing on a cult who recruit through rape and hope to achieve true ecstasy through sexual release. Shot, as with all of Jissôji’s Art Theatre Guild works, in a radically stylized manner, the film sits somewhere between the pinku genre and the fiercely experimental approach of his Japanese New Wave contemporaries.

The final entry in the trilogy, Poem, returns to black and white and is centred on the austere existence of a young houseboy who becomes helplessly embroiled in the schemes of two brothers. Written by Toshirô Ishidô (screenwriter of Nagisa Ôshima’s The Sun’s Burial and Shôhei Imamura’s Black Rain), who also penned This Transient Life and Mandara, Poem continues the trilogy’s exploration of faith in a post-industrial world.