There’s always something exciting when two creative forces combine. Director Terrance Fisher had helped revolutionize horror with his work at Hammer to bring back the famous monsters in living color. Richard Matheson contributed to the scripts for several of AIP’s Edgar Allen Poe films starring Vincent Price and directed by Roger Corman. Towards the end of the Sixties, the two would collaborate to adapt Dennis Wheatley’s novel into The Devil Rides Out. This film focuses on devil worshippers in England. Christopher Lee (Scars of Dracula) gets a turn as the hero while Charles Gray (The Rocky Horror Picture Show) puts on the robes to lead occult ceremonies. The movie proved to be a hit for Hammer. The Devil Rides Out arrives on Blu-ray just in time for your Halloween viewing fun. Here’s the press release from Scream Factory with all the bonus features: 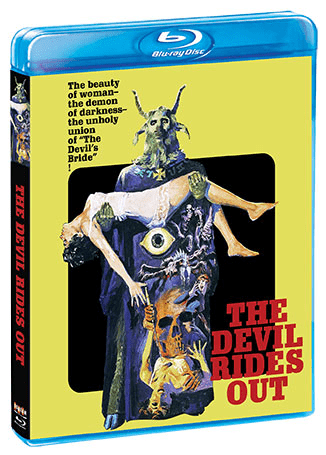 THE DEVIL RIDES OUT
Starring Christopher Lee and Charles Gray

All the demons of hell are summoned to Earth to claim “The Devil’s Bride”! Based on the celebrated novel by Dennis Wheatley, The Devil Rides Out is one of Hammer’s most accomplished and thrilling mystery horrors. On October 29, 2019, SCREAM FACTORY™ is proud to present Hammer horror cult classic THE DEVIL RIDES OUT on Blu-ray. Directed by Terence Fisher (Frankenstein Created Woman), this 1968 shocker stars Christopher Lee (Star Wars: Episode II – Attack of the Clones, The Lord of the Rings), Charles Gray (Diamonds Are Forever), Nike Arrighi (Day for Night), Leon Green (Flash Gordon), Patrick Mower (Marco Polo), Gwen Ffrangcon-Davies (The Case-Book of Sherlock Holmes), Sarah Lawson (The Avengers, 1966) and Paul Eddington (Good Neighbors). A must-have for movie collectors and horror enthusiasts, this definitive Blu-ray edition contains special bonus content and is now available for pre-order at ShoutFactory.com.

Movie synopsis
The debonair Duc de Richleau has been entrusted with the care of his deceased friend’s son, Simon Aron. The Duc discovers that the young man has been seduced into joining a satanic cult headed by the diabolic Mocata, who is intent on making Simon one of the Devil’s disciples. Having rescued Simon from a bloodied ritual, de Richleau is pursued by Mocata, who will stop at nothing to destroy the Duc and his friends, even summoning the Angel of Death himself.