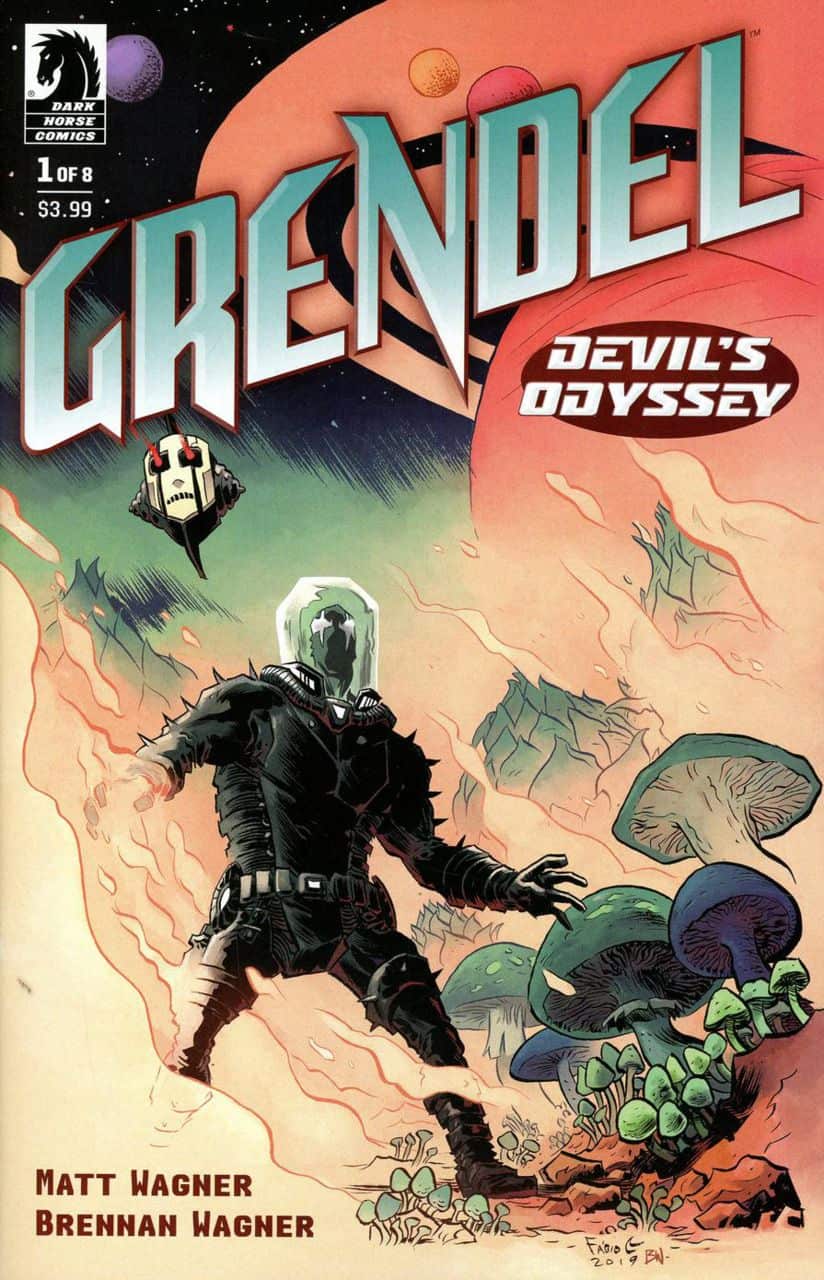 Grendel: Devil’s Odyssey #1 – I often get tired of the nostalgia-driven, recursive nature of the comics industry, but I was recently very happy to see Matt Wagner return to, and complete, his long-running series Mage.  Now, he’s returned to my favourite of his series, Grendel, and has even taken up the character of Grendel Prime again, making me even happier. I came late to Grendel, first reading the War Child miniseries that starred Grendel Prime, so to me, he is “my” Grendel.  Many decades (and Grendel Khans) have passed, and it looks like the Assante line is at its end. The final Khan summons Grendel Prime, sending him off into space with the genetic material of Orion Assante and some other key people, to clone them and restart the human race on another world.  The tone and look of the book are just right, with Wagner’s son providing colours. I’m pleased that there are seven more issues of this miniseries to go.

Berserker Unbound #3 – I didn’t expect that Jeff Lemire and Mike Deodato, when deciding to create a comic about a Conan character in modern-day New York would become an off-beat buddy comic, but it works.  Our titular barbarian hangs out with an elderly homeless gentleman, and they talk to each other in their own languages, not understanding the other at all, at least at first. This is the second straight issue of them hanging out together, but it does look like things are going to switch up in the next issue.  It’s pretty decent stuff. 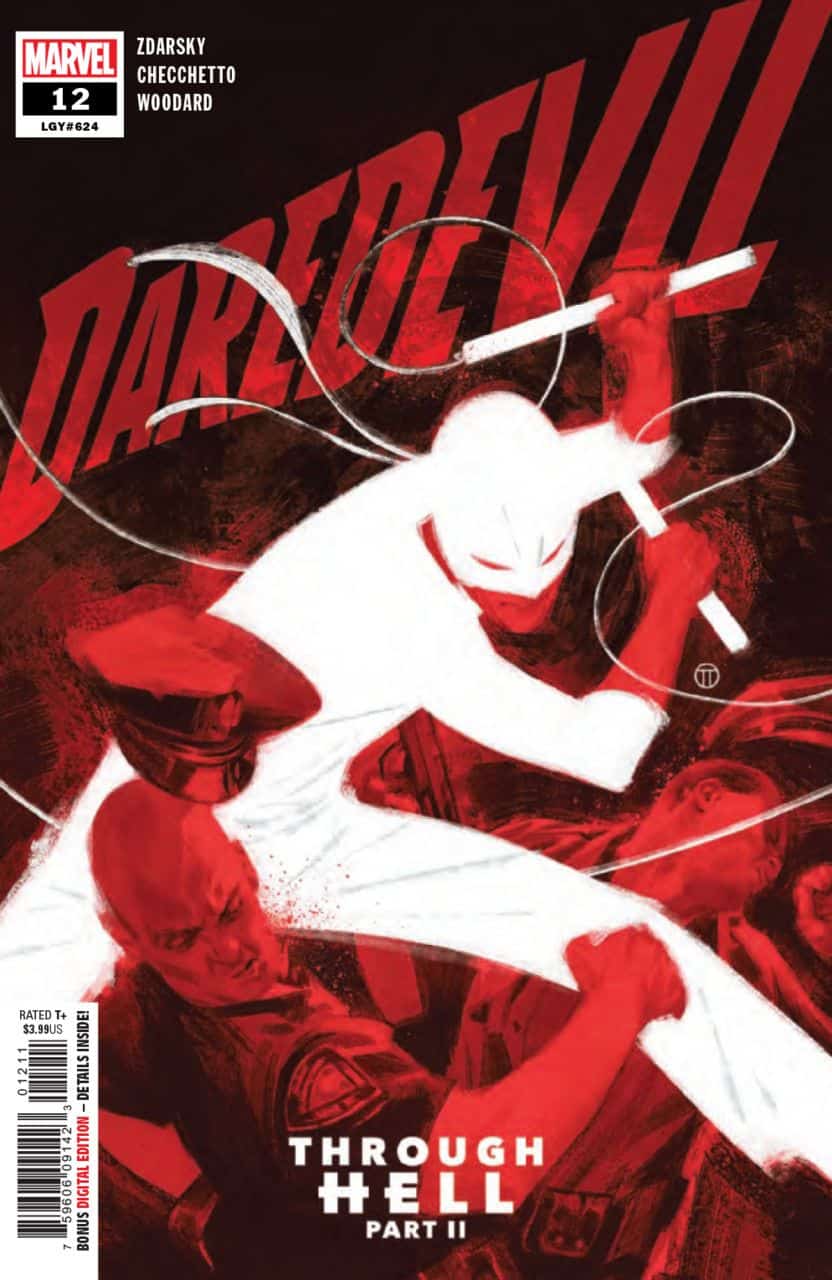 Daredevil #12 – Matt and Foggy’s attempt to rescue one of the imposter Daredevils from a group of rogue cops goes poorly, but not as poorly as Wilson Fisk’s first meal with the rich and powerful of New York.  Chip Zdarsky continues to impress on this title, although I’m not sure why Foggy wouldn’t use Facebook Live to ensure his safety (also, whose phone tells you when you are talking to someone’s voicemail?).

Deathstroke #48 – Sadly, after this, there are only two issues remaining in Priest’s incredible Deathstroke run.  This has been the best comic in the Rebirth line, and it has never failed to impress and surprise me. This month, we learn the truth behind Slade’s resurrection, see what the other Slade is getting up to, and whittle down the list of supporting characters a little more.  The Red Lion even makes an appearance! Priest excels at laying out long-running stories that end up depending on barely noticed moments from earlier in the series, which somehow always remain flexible enough to incorporate whatever editorially-mandated nonsense is happening in the larger universe (i.e., Year of the Wheelon).  I look forward to sitting down and reading this entire run straight through again in a couple of years. 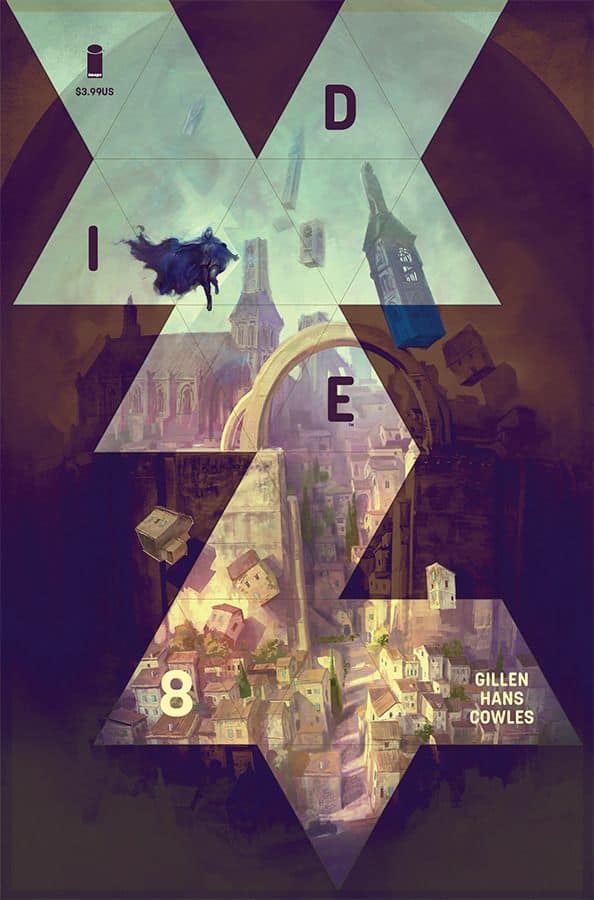 Die #8 – I don’t want to be critical, as I’ve enjoyed this series a lot so far, but this is the first issue that didn’t fully work for me.  We dig a little more into Matt’s character, but for some reason, nothing stuck with me. Maybe I was just too tired when I read this issue, and should give it another chance, but I couldn’t escape the feeling of it going through the motions a little.

Doctor Aphra #37 – In the wake of the last arc, Aphra and Vulaada are working on Vader’s flagship, helping the archaeology department to find ancient temples where the Rebellion might be stashing their bases.  Aphra wastes no time in getting up to her mischievous, manipulative ways, as she has to make sure that Vader isn’t planning on killing her. I enjoyed this book a lot.

House of X #6 – Bringing all mutants together, hero and villain, is an admirable goal of Krakoa, but you have to wonder how people with years of enmity and pain between them are going to act.  The first order of the new council is to decide Sabretooth’s fate, and there is something a little odd about people like Sinister and Apocalypse getting a say in this matter, but it does make for some interesting comics.  This issue ends House of X, but that doesn’t mean much until next week, when Hickman’s Powers of X also comes to its close. I’ve often wondered if this title is set in the 616 proper, as Hickman’s made a number of changes that are going to be difficult to reverse.  This issue makes me think that we are looking at the mainstream Marvel universe, and I’m very curious to see where he’s going to be taking his X-Men series. I love comics about building society and structure (that was my favourite aspect of The Walking Dead in its last years), but now that just about every X-Enemy has been taken off the board, I’m not sure what Hickman intends to have the X-Men do.  What I do know for sure is that I haven’t been this invested in the X-Men since Fraction and Gillen wrote the book, and I haven’t felt this level of excitement and newness in these characters since Grant Morrison’s day. 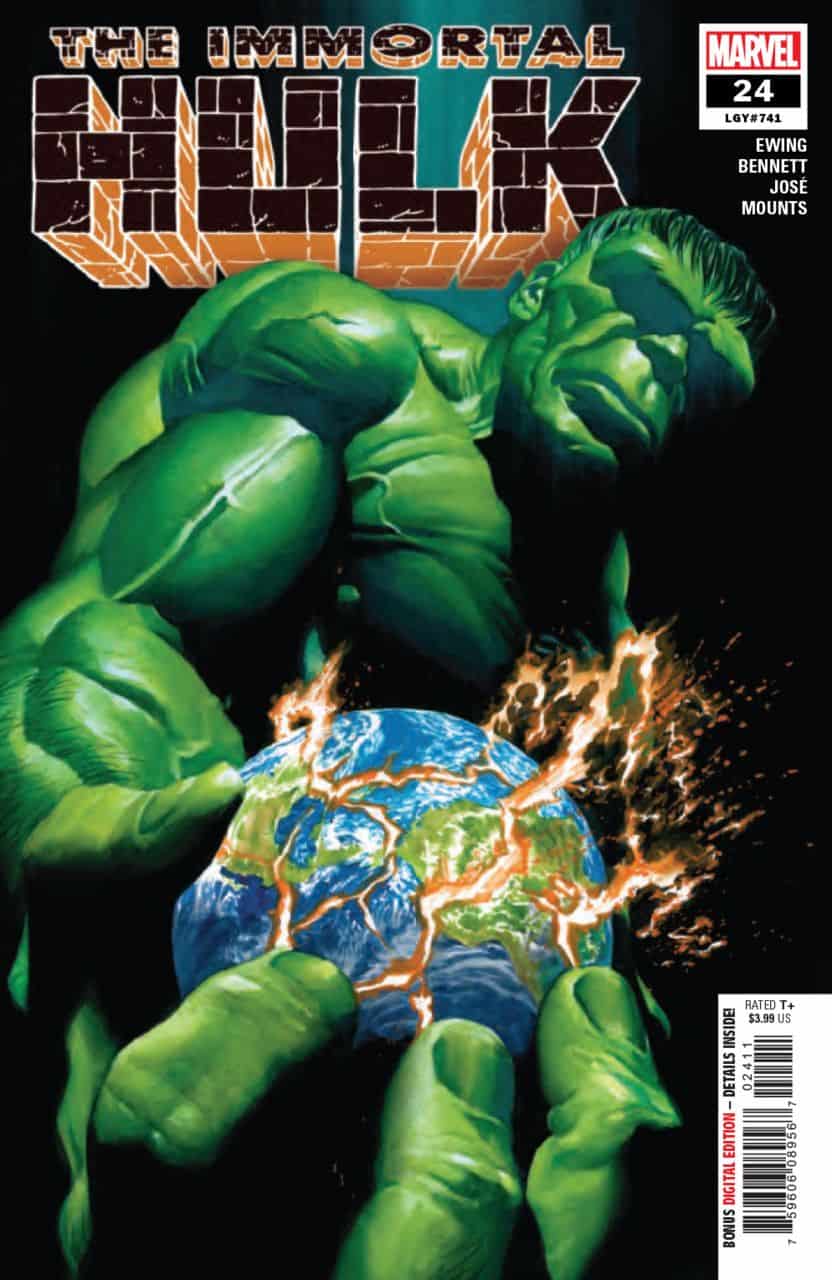 Immortal Hulk #24 – Al Ewing wraps up General Fortean’s story, as the Hulk and his allies deal with the Shadow Base, but he also launches a much larger, more cosmic story that has some connections to his excellent Ultimates series, and his apparent interest in doing strange things with Galactus.  I’m not sure how I feel about this book getting cosmic, as Ewing has already introduced so many strange elements into the Hulk’s story, but I trust Ewing a great deal, and want to see where he goes with all of this.

Legion of Super-Heroes: Millennium #2 – Rose and Thorn continue their (her?) journey through the future of the DC Universe, ultimately ending up in the 31st Century, as the Legion of Super-Heroes forms.  This series is just a big tease of the series to come, with some unfortunately typical Brian Michael Bendis flourishes, such as Rose’s irritating discussion with the guy who becomes Booster Gold. I’m more excited than I was before for the Legion to return, but their few pages in this issue do little to quell my fears that Bendis is just going to give us entire issues full of the team arguing with one another, much like his New Avengers run.  Still, Ryan Sook’s new designs for the characters are intriguing, and my love for these characters is pretty firmly established. I do wonder how the team appears to be forming, and Superboy is with them, while in the Superman comic, the already-formed team invites him to join them. Time travel paradox, or the old problem with Bendis not maintaining his own continuity? 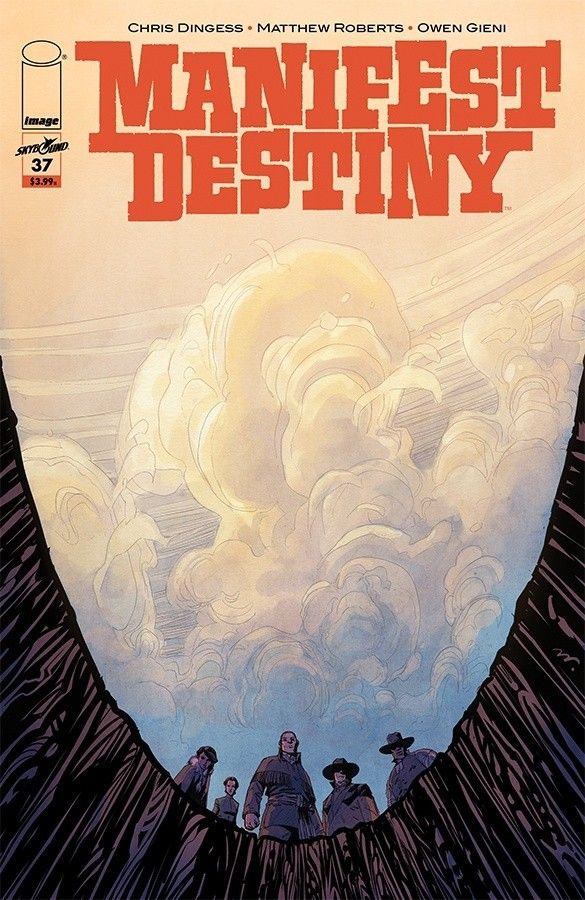 Manifest Destiny #37 – I wasn’t sure this series was ever coming back, so its return this week makes me pretty happy.  This series follows the Lewis and Clark expedition as they traverse the land that became the United States, killing monsters along the way.  This time around, the expedition finally gets back on the river after the long winter, and finds a massive worm that kills one of the crew. Intrigue is building around Lewis and Clarks’ plans for Sacagawea’s baby, but it looks like the rest of the crew might all finally be working well together.  This was a solid, if quick, issue.

The Punisher #16 – Matthew Rosenberg brings his second run on The Punisher to a close, as Frank and his “team” finish the fight against Baron Zemo.  This series has stayed interesting, as Castle has chased Zemo across the world. Rosenberg has given us exactly zero insights into Frank’s character, but I’m okay with that, as he doesn’t really have one.  Szymon Kudranski has accomplished the rare feat of being the only artist on a title (even if it was just sixteen issues), allowing this book to have a remarkably consistent (and dark) atmosphere throughout.  I’m not sure how long it will be until we see another Punisher series, but I’m good with leaving the character to lie fallow for a while, until someone has a new take on him.

Sea of Stars #4 – I think that Jason Aaron and Dennis Hallum have finally succeeded in getting me to be fully invested in this comic.  Kayden meets one of the Zzazteks, an alien race, who believes that he is their god, Quasarro, and we learn that he has a mystic weapon inside of him, presumably giving him his new abilities.  At the same time, his father runs into some Zzazteks himself, and the only thing keeping him going and fighting is the knowledge that Kayden is still out there. I’m beginning to enjoy the dual streams of this story more, especially since the writers have moved away from the more child-like qualities of the story we saw before.  Stephen Green’s art is lovely, and the designs in this book are very interesting. I’m glad I stuck through the first few issues.

Star Wars #72 – Greg Pak and Phil Noto continue to portion out this arc as three separate plot threads, and while each of them is fine (okay, Luke’s story is a little dull), the book is starting to feel very diminished in the wake of Kieron Gillen’s excellent run.  Also, is it not reasonable to expect that Darth Vader would recognize C-3PO? Didn’t he build him? I know that “all droids look the same”, but does that extend to people who are masters of the Force? This issue didn’t work for me.