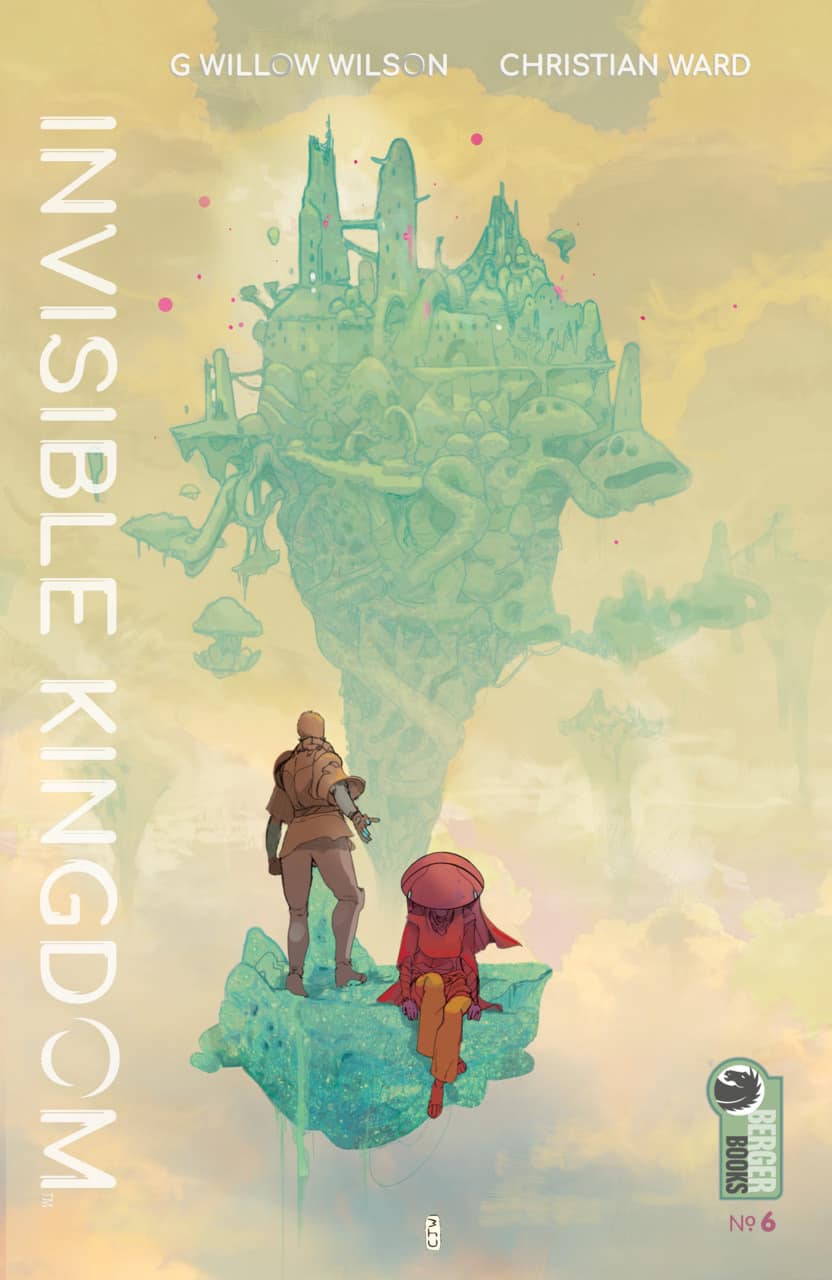 Invisible Kingdom #6 – I’m very happy to see this book return from its brief hiatus.  G. Willow Wilson and Christian Ward have put together a fantastic science fiction series that is set in a galaxy where Lux, a corporation modeled on Amazon, runs just about everything.  A contracted delivery ship runs afoul of Lux when they learn that it is paying off the Renunciation, an austere religious sect, and the crew takes in a none. Now the crew is on the run, and find it hard to secure any kind of assistance.  In this issue, they try to get some help from the none’s world, and then find themselves in a trap set by a pirate in the junk ring orbiting that world. Wilson has invested a lot into these characters, and they become even more complex with this new arc.  Ward’s art is occasionally confusing but always gorgeous, and the book is an exciting read.

Black Panther #17 – This might be the strongest issue of Ta-Nehisi Coates’s tenure on Black Panther.  As Space N’Jadaka goes hunting for a new body and gathers his forces, T’Challa’s people regroup and prepare for the next thing to happen.  Storm and Space Nakia have a frank and honest discussion (I think Coates should write more Storm!), while T’Challa tries to figure out if Bast is working against him.  Daniel Acuña does a lot of work to make conversations look interesting in this issue, and succeeds. It feels like this arc is building towards a big conclusion, just as I find myself getting more and more into it. 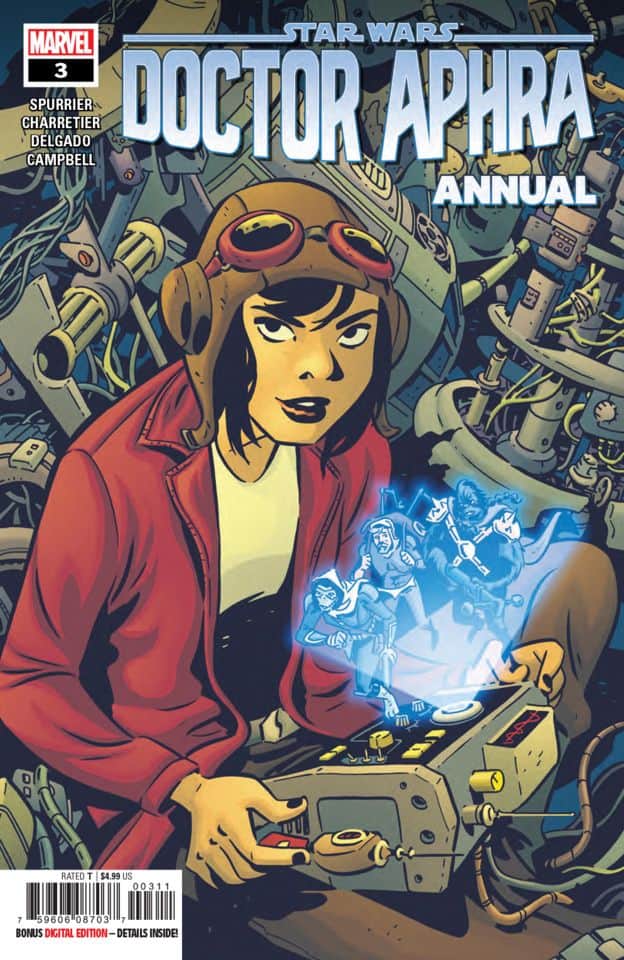 Doctor Aphra Annual #3 – Since taking over Aphra’s adventures, Simon Spurrier has introduced some interesting new characters into her world.  Winloss and Nokk, the odd couple monster hunters take centre stage again, as both they and Black Krrsantan show up on Tatooine, at the same cantina, but at different times.  Is that a coincidence? It doesn’t seem likely, does it? Elsa Charretier provides the art for this annual, which is pretty cartoonish, but appealing. I enjoyed this, although the structure of Spurrier’s Aphra stories is starting to get a little obvious at times.

Excalibur #1 – This is probably the Dawn of X book that least appealed to me when I saw the solicitations, and having read the first issue, I think I should have gone with my gut on this one.  It’s not that the comic is bad, per se, but it is kind of dull. Betsy Braddock (she just wants to go by that now) makes the move to Krakoa, but doesn’t seem all that interested in being there.  She’s not too pleased to learn that her insane brother Jamie has been brought back to life (it is an odd choice for anyone to make, given the nonsense he’s put the X-Men and his family through), and is also not too excited to get recruited by Apocalypse to investigate a malfunctioning gate that leads to Otherworld.  I have some continuity quibbles with this issue. I don’t know when Morgan Le Fay became the ruler of Otherworld (the last I saw her, she was running the show on Weirdworld, which is not the same place). The last time we saw Brian Braddock, he was chubby and bearded, but now he appears much as he did the last time Alan Davis drew him.  I also don’t understand how one of the Krakoan gates would end up on Otherworld, as all the ones we’ve seen so far have required that someone plant a flower where they open. Who planted one in Morgan’s scrying pool? The group of characters that coalesced around this problem that Apocalypse is trying to solve feels very haphazard. It’s cool to see Trinary get used, but Rictor’s on the cover and doesn’t appear anywhere in the issue, and Jubilee’s reason for getting included is incredibly weak.  Marcus To does a fine job on the art, but isn’t spectacular. Tini Howard did not draw me in with this story, and while it’s cool to see the new change Betsy has to deal with, I’m not that interested in reading the next issue. Marauders last week was disappointing, and felt off, tonally, but this ended up just not inspiring or interesting me very much.

Journey to Star Wars: The Rise of Skywalker – Allegiance #4 – Ethan Sacks wrapped up this four-part weekly series rather quickly, and of course the story didn’t really end, as it’s intended as a prologue to the upcoming Star Wars film.  I guess that movie is going to open on the Resistance being a little better equipped and manned than when we last saw them, so this title had to explain how that came to be. It’s an exciting issue, with some nice art from Luke Ross. It has me mildly more interested in the upcoming film than I was before (my prediction is that it will be pretty, soulless, and dull).

SFSX #2 – The first issue of this new series, by Tina Horn and Michael Dowling really caught my eye and attention, and I find the second issue to be just as good.  Avory is on the run, after her husband was arrested by The Party, a quasi-religious organization that has taken over San Francisco and imposed its rigid set of morals on at least the city, if not a wider swath of the country.  Avory, a former star in the porn world, tries to go to her old friends at The Dirty Mind, a now-underground sex club, but they turn her away as a traitor to the cause. She has no choice but to turn to a rich former client, and that’s where things get even more dangerous for her.  This series has a strong foundation of suspense baked into it, and is carried by its very strong character work. The future it depicts is hard to imagine, but also comes across as believable in this time of great flux. I’m very interested in seeing where this leads.

Silver Surfer Black #5 – I think that this miniseries fell victim to Donny Cates’s ambitions for it.  I kind of lost interest a little while ago, and found that I was just following along to let it play itself out.  I really liked Tradd Moore’s trippy artwork, but am not entirely sure I understood how it all ended. Or cared.

Batman and the Outsiders Annual #1 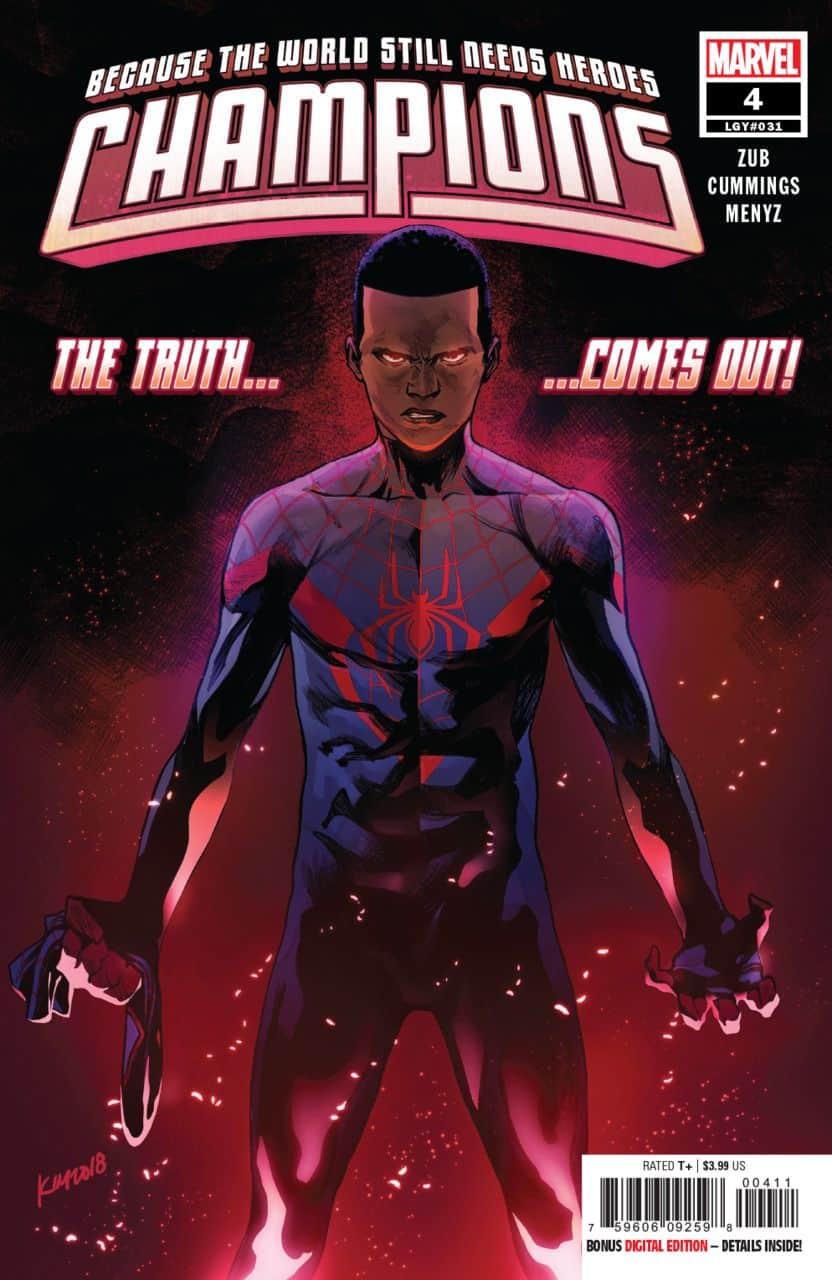 Champions #4&5 – I regret not getting this series starting when Jim Zub took over the writing of it.  The expanded team of teenagers has a bit of a modern-day Legion of Super-Heroes vibe to it, as Ms. Marvel struggles to keep the team together.  The art shows that Marvel didn’t really consider this a top shelf series, but it’s still pretty good. I should track down the rest of the run.

The American Way: Those Above and Those Below – I read the first American Way series years ago, and was surprised to see Vertigo put out a sequel to it eleven years later.  I guess that has a lot to do with the fact that it’s written by Oscar-winning screenwriter John Ridley. This book is set a decade or so after the first series, which is fitting, and looks at race and super powers in an alternate timeline where America somehow got more racially divided than in the real world.  It’s interesting, but without recent knowledge of the original story, it’s a little hard to follow or to care about the characters. I also didn’t feel like it was saying anything particularly new, but it was a decent story.