After struggling against other studios, Universal made their name in the horror genre. While most people know about Dracula, Frankenstein and the Mummy. But there were more scares using their main stars to keep people under their seats. Universal Horror Collection Volume 3 brings us another four titles that devoted Svengoolie followers adore. The Tower of London features Basil Rathbone, Boris Karloff, Vincent Price in a tale of the early days of King Richard III. Man Made Monster is a shocking tale about Lon Chaney, Jr. and Lionel Atwill exploring electricity. While The Black Cat features Bela Lugosi, this is not the same film he made previously with Boris Karloff. This time there’s a lot of cats in the film. Horror Island is another tale of why you should stay at out of the way places no matter how tempting they sound. This is a fun quadruple fun and most of them are rather short so it plays like a double feature or a single viewing of Martin Scorsese’s The Irishman. The Blu-ray boxset arrives right before Christmas so it’s the perfect gift for the Svengoolie fanatic in your life (hint). Here’s the press release from Scream Factory: 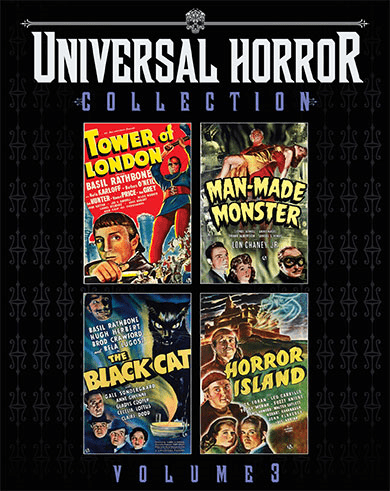 Los Angeles, CA – Get ready for more thrills and chills as Universal Horror Collection Volume 3 is coming to Blu-ray on December 17 from Scream Factory. The collection comes packed with a wealth of special features, including new audio commentary by film historians Steve Haberman, Tom Weaver, Constantine Nasr, Gary D. Rhodes, and Ted Newsom, and a new 2K scan of a fine grain print.

Volume 3 of the Universal Horror Collection includes four tales of terror from the archives of Universal Pictures, the true home of classic horror. This collection includes such horror stars as Boris Karloff, Bela Lugosi, Vincent Price, Lon Chaney Jr. and Basil Rathbone. A ruthless king rises to power with the help of his mad and murderous executioner in Tower of London. A mad scientist transforms a carnival performer into a murderous monster in Man Made Monster. In The Black Cat, a group of greedy heirs find themselves stuck in a creepy mansion where, one by one, people turn up dead. What started out as a treasure-making scheme ends up deadly for a group of people stuck in a haunted castle with a killer known as “the Phantom” in Horror Island.