As Gift Giving season arrives, Arrow Video has three kingly treats that should please cinephiles if wrapped up. Although chances are if you get them, you’ll decide you’d rather just gift them to yourself and invite your pal over to watch them during the holidays.

First up is Slaughterhouse-Five based on the novel by Kurt Vonnegut Jr. During my time in college, I was lucky enough to be Vonnegut’s tour guide when he came to speak. We talked a little bit of the film and he praised it which is pretty unusual. Most authors will whine, “they murdered my novel!” What made this film different? Vonnegut said first you need to work with George Roy Hill. The director was in the middle of a hot streak when he took up the adaptation. Hill had just made Butch Cassidy and the Sundance Kid and would go on to make
The Sting, The Great Waldo Pepper and Slap Shot. Hill figured out a way to show a man who had become unstuck in time and was floating between various times in his life including his life on another planet with Valerie Perrine.

Jake Speed was a dashing adventure film. Jake is thought to be the hero of fictional novels. But it turns out that he’s real and the author behind the novels work with him. This is good news when a woman needs his help when her sister is kidnapped and taken to Africa. Jake seems to be the only hope against the evil that’s John Hurt (Alien). Director Andrew Lane had previously been a producer on the masterpiece teen flicks Valley Girl and Night of the Comet.

The Limits of Control is a hitman drama from director Jim Jarmusch. Isaach de Bankolé (Casino Royale) roams around Spain waiting to discover the identity of his target. It’s not the usual hitman drama. The action is rather lowkey. There’s plenty of famous faces that pop up on the road including Bill Murray. This is more arthouse than a normal hitman flick.

Here’s the press release from Arrow Video with more information including the bonus features:

Arrow Brings 2019 to a Close with Alien Abductions, Pulp Heroes, and Jim Jarmusch!

2019 has been another great year for Arrow Video with a number of new releases to please home video collectors the world over. With the year’s lone remaining month, Arrow has chosen to go out in style with three films making their North American Blu-ray debuts!

Hitting shelves on December 3rd is George Roy Hill’s landmark science-fiction classic, Slaughterhouse-Five. This story about WWII soldier Billy Pilgrim and how he was abducted by aliens took home the Jury Prize at the 1972 Cannes Film Festival and has been a favorite of sci-fi fans ever since. Author Kurt Vonnegut, who wrote the novel the book is based on, famously claimed, “I drool and cackle every time I watch that film…” Not only is Arrow bringing this to Blu-ray for the first time in North America, but it comes with a brand new 4K restoration and a spaceship-load of special features.

Also coming home on December 3rd is Jake Speed. In Andrew Lane’s action-adventure film all pulp heroes are real and Jake Speed (Wayne Crawford) is the best of the bunch. When Margaret (Karen Kopins) is captured by an evil slaver, Jake steps in to save the day. This charming, and somewhat campy, ’80s adventure features a brand new 2K restoration. Bonus features include a new interview with director Lane. In the words of Jake Speed, “Heroes don’t die,” and now that he’s coming home, Jake won’t either.

The final Arrow release of 2019 streets on December 10th and it comes from the legendary Jim Jarmusch. In his nearly 40 years behind the camera, Jarmusch has worked with stellar cast after stellar cast, but none may be more impressive than the ensemble he gathered in 2009 for his crime drama, The Limits of Control. Isaach de Bankolé stars as a mysterious loner on a mission to complete a hit and along the way he runs into a slew of interesting characters including Paz de la Huerta, Tilda Swinton, Gael Garcia Bernal, John Hurt, and Bill Murray. This first-ever Blu-ray release of the film includes new and archival bonus content. 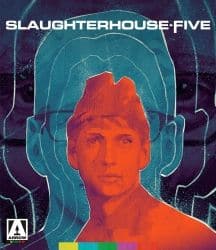 Slaughterhouse-Five
BILLY PILGRIM LIVES – FROM TIME TO TIME TO TIME… Past, present and future collide in darkly satirical fashion in Slaughterhouse-Five! Based on Kurt Vonnegut’s classic 1969 novel, this tale of time travel and alien abduction emerged as part of a wave of more cerebral science-fiction films in the late 60s to early 70s, elevating the genre beyond the B-movie fare of previous decades. Upstate New York, 1968. Mild-mannered Billy Pilgrim (Michael Sacks, The Sugarland Express) finds himself “unstuck in time”. Traveling back and forth across the entire span of his existence, he experiences key events of his life in a random order, including his formative years, the firebombing of Dresden and finally, at some undefined point in the future, his surreal adventures on a distant planet. Praised by Vonnegut himself for its fidelity to his novel, Slaughterhouse-Five boasts assured direction by George Roy Hill (Butch Cassidy and the Sundance Kid) and a memorable score by renowned concert pianist Glenn Gould. Now exclusively restored in 4K, Slaughterhouse-Five shines like never before, reinforcing its timeless appeal. 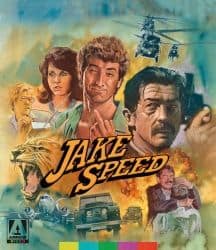 Jake Speed
MORE THAN A MYTH, LESS THAN A LEGEND… AND A BIT TOO BIG FOR HIS BOOTS. When her sister is taken by a gang of white slavers, Margaret (Karen Kopins, Troop Beverly Hills) knows she needs a hero with a difference to bring her home. Enter Jake Speed (Wayne Crawford, Barracuda), leaping from the pages of pulp thriller novels and into the real world. With Margaret and his trusty sidekick Desmond Floyd (Dennis Christopher Chariots of Fire), Jake arrives hot on the heels of the kidnappers in a southern African country gripped by civil war. But it soon turns out Jake got more than he bargained for when he discovers that the ringleader of the slavers is none other than his own arch-nemesis: the wicked, criminally insane Sid (John Hurt, Alien, The Osterman Weekend)… A ripe slice of ’80s action cheese in the tradition of Raiders of the Lost Ark and Romancing the Stone, Jake Speed has it all: romance, death-defying stunts, spellbinding scenery shot on location in Zimbabwe… and best of all, a wickedly off-the-wall performance by the late John Hurt, proving the old adage that a hero is nothing without a worthy foe. 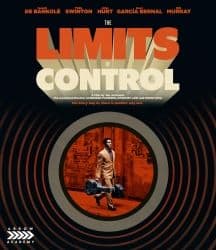 The Limits Of Control
From Jim Jarmusch, the Acclaimed Director of The Dead Don’t Die, Stranger Than Paradise and Broken Flowers
When it comes to American independent cinema, there’s no one quite like Jim Jarmusch, the celebrated auteur behind such classics as Stranger Than Paradise and Only Lovers Left Alive. Eschewing his usual American landscapes in favor of a variety of locations throughout urban and rural Spain, his 2009 anti-thriller The Limits of Control remains one of his most alluring and multi-layered creations. An enigmatic loner (Isaach de Bankolé, Black Panther, Ghost Dog: The Way of the Samurai) arrives in Spain, instructed to make contact with a series of strangers in different locations throughout the country, each of whom provides a cryptic clue which propels him further towards his mysterious goal. But who is the Lone Man? Why is he here? And how does the recurring figure of an alluring femme fatale (Paz de la Huerta, Enter the Void) fit into the puzzle? Boasting stunning cinematography by the award-winning Christopher Doyle (In the Mood for Love) and featuring cameos from an array of celebrated character actors, including Tilda Swinton (The Grand Budapest Hotel), Gael García Bernal (Y Tu Mamá También) and the late John Hurt (Tinker Tailor Soldier Spy), The Limits of Control is a languid, hauntingly beautiful film that combines the best of American and European arthouse sensibilities.

High Definition Blu-ray™ (1080p) presentation
Original lossless DTS-HD Master Audio 5.1 and PCM 2.0 stereo soundtracks
Optional English subtitles for the deaf and hard of hearing
An American in Europe, a new video interview with Geoff Andrew, author of Stranger Than Paradise: Maverick Film-Makers in Recent American Cinema
The Rituals of Control, a new video essay on the film by author and critic Amy Simmons
Behind Jim Jarmusch, an archival documentary on the making of the film
Untitled Landscapes, an archival featurette showcasing the film’s locations
Theatrical trailer
Reversible sleeve featuring two choices of artwork