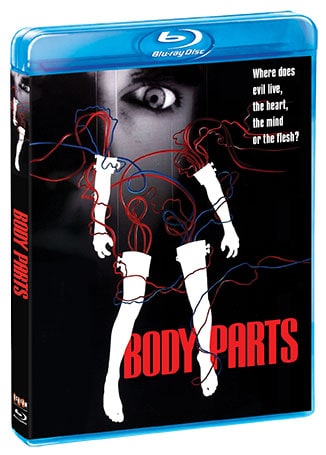 Body Parts is a tale of a medical experiment gone very wrong. Bill Chrushank is a criminal psychologist who loses his arm and nearly his life in a grisly car accident. A daring medical operation follows, in which a donor’s arm is successfully grafted onto Bill’s body. But after the operation, the arm starts to take on a violent life of its own, striking out against Bill’s wife and children. Consumed by fears about his dangerous behavior, Bill is driven to learn the donor’s identity – and makes a horrifying discovery that delivers him into a world of unimaginable terror. Written and directed by Eric Red (Cohen & Tate, Bad Moon), this thriller stars Jeff Fahey (Alita: Battle Angel) and Brad Dourif (Child’s Play, Graveyard Shift).

In Let’s Scare Jessica to Death, Jessica (Zohra Lampert, The Exorcist III) has been released from an institution after suffering a nervous breakdown and seeks the tranquility of a secluded home in Connecticut to help make her recovery complete. But instead of a restful recuperation with her husband and close friend in the New England countryside, Jessica soon finds herself falling into a swirling vortex of madness and the supernatural. Even more unsettling is that the entire region seems to be under the influence of a mysterious woman who has been living in the supposedly empty house. Jessica’s fear and dread only intensify when she discovers that the “undead” girl, Emily, tragically drowned long ago, on her wedding day. Is she back to take vengeance?