Welcome to the column where I talk about some of my favorite comic books of 2019.

2019 was a great year for comics with plenty of new books and exciting storylines that revitalized the world of superheroes. I wanted to list down my Top 10 comics of 2019, ten titles whose pages grabbed me every time an issue dropped.

What can I say that people haven’t already said? This Hulk series has become immensely popular and with good reason. The positioning of Hulk as this horror mythic character on his path of vengeance and revenge was a great idea. Immortal Hulk has paid homage to the mythos and created a brand new direction for it to tread upon.

This latest Amazing Spider-Man series has been a breath of fresh air.  It harkens back to the good old days but creating something new and fresh for it to work with. Couple that with great characterizations of Peter and Mary Jane and a terrifying villain waiting in the wings, you have a pretty awesome title.

The magical side of the DC Universe has always been sorely under represented but this series has found a way to encompass it all and been a revelation. Zatanna and Wonder Woman have been amazing in this run and having John Constantine, Swamp Thing and other magical heroes in a story that introduces new and old concepts to the dc universe has made it even more better.

Venom had a pretty big year with the Absolute Carnage event. The event by itself was great and refreshing. Every story has deconstructed and built upon the world of Eddie Brock and the secret behind his son, Dylan Brock has added a sense of intrigue to the book. This book recently teased the return of the Ultimate Universe and this is one to watch out for.

The Flash has been one of DC’s most consistent titles. While some arcs may have come across half baked, it is the only title that seems to want answers about the mystery of the past of the dc universe. Year one was an excellent but ill timed story but the Hunter Zolomon storyline was fantastic. I can’t wait to see the return of the Flash Family in their full glory

One of DC’s biggest hits this year was the else worlds story, DCeased. It was a new take on the zombie genre involving the heroes of the dc universe against a foe they couldn’t hope to vanquish. It was a beautiful and tragic story that wore its heart on its sleeve proudly. I really loved Canary Lantern and would love to see more of her.

This series might be one of most fun books I have ever had the pleasure of getting to read. It’s sassy and humorous and hits all the right notes. The characterization of Felicia Hardy has been on point and this grasp on the character has led to adventurous romps that elevate the series.

House of X / Powers of X

Like it or hate it, this was the one that had everyone talking. A much needed breath of fresh air that has created a wave of excitement over the status of X Books unlike any in recent times. It has taken bold steps and unique directions that could go in multiple directions. It points towards a much needed direction and sense of purpose for the X-Men.

Guardians of the Galaxy

Guardians was a franchise that needed a shot of fresh air and this series was just the one it had been waiting for. A New roster that may be one of the most powerful guardians rosters was appreciated considering the guardians team had remained unchanged for a large amount of time. It was a great look into the cosmic side of the Marvel Universe

One of the best sagas of 2019 was the Life Story miniseries by Zdarsky and Bagley. A reimagining of Spider-Man set in a world where he underwent the various struggles of his life aging naturally. It was a great look into an older peter parker and how his responsibility could evolve into something more. It was a beautiful and tragic miniseries that was something special

Those are my picks for the top 10 comics of 2019. I loved a lot more but I had to narrow it down. It was a fantastic year and I can’t wait for what the next year will bring.

What comic book title was your favorite one from 2019? 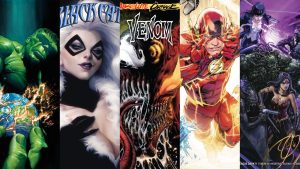