Let’s get to the first thing you want to know – this My Bloody Valentine: Collector’s Edition is the 1981 original that was made in Canada and not the 3-D remake from 2009. This is the one you want for Valentine’s Day when you’re sitting back with the one you love that can enjoy a horror night or just watch by yourself. All you need to know is this is the original that was made in Canada and horrified America in 1981. This is the one that inspired the naming of the greatest shoegazing band that gave us Loveless. The Collector’s Edition includes the original theatrical cut and the version with footage the MPAA demanded snipped for an R-rating. So make notice which version you want to share with your Valentine’s Day date. The Blu-ray comes out on February 11 which is the same day it came out 39 years ago. Coincidence? 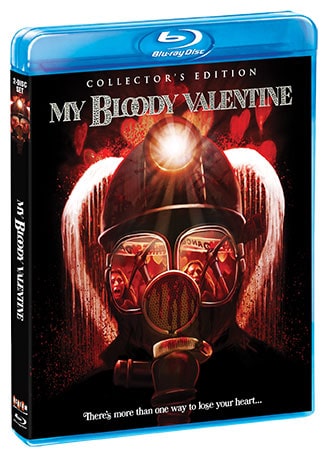 On February 11 Scream Factory will release the much anticipated My Bloody Valentine [Collector’s Edition]. Stacked with new bonus features including a new 4K scan and interviews with cast and crew, this is a collector’s must-have.

On Valentine’s Day, someone always loses their heart. Twenty years ago, this small town lost more than that. When supervisors abandoned their posts to attend the town’s annual holiday dance, a tragedy claimed the lives of five miners. The sole survivor, Harry Warden, was institutionalized, but returned for a vengeful massacre on the disaster’s first anniversary.

Nineteen years later, the town is gearing up for another Valentine’s Day party. Teen sweethearts T.J. and Sarah, along with their friend Axel, are among the excited partygoers. But when a box of candy containing an eerie warning and blood-soaked heart arrive, the townsfolk realize that romance is as good as dead. And so are they …