The five day event is now over!

And, the CW DC TV shows and broader DC and WB multiverse has been changed.

There is one new Earth-Prime where are the core Arrowverse TV shows take place on.

lol i didnt catch this live. her helping him get the cap off #theflash #supergirl #CrisisOnInfiniteEarths pic.twitter.com/WhuPR0vQpf 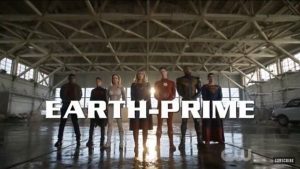 Looks like we’ll get a brand-new Justice League too on this Earth.

In a familiar HQ. 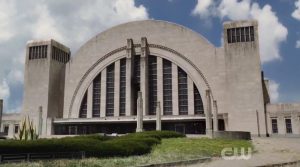 With a shrine to Oliver Queen the Green Arrow. 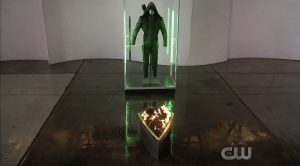 Including a seat for him at the team’s table.

CW also seems to be setting up Arrowverse debuts of the Wonder Twins, Zan and Jayna, and the space monkey Gleek since we see an empty cage with Gleek’s name on it in the HQ. 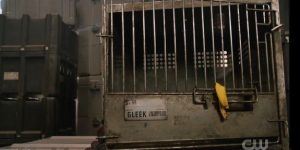 Prior to this we did the DC film Flash, with a movie coming out in 2022, meet the CW Flash.

We then encounter a new multiverse that encompasses other TV and movie properties for DC and WB.

That includes Earth 2 where the CW show Stargirl will be set and seemingly will include the Justice Society of America (JSA).

Stargirl is set to debut on the CW in the Spring 2020.

It’s her destiny. Stargirl is coming to The CW this spring! #DCStargirl pic.twitter.com/SZ2YyBrl5J

Below, for comparison sake, are the comparable Earths from DC’s Multiversity Guidebook from five years ago. As context, back then DC has a finite Multiverse of 52 Earths. After Dark Nights: Metal and Doomsday Clock, in 2020, DC has an infinite multiverse, a metaverse and a dark multiverse.

No equivalent for Earth 96 (Superman Returns movie) from the Multiversity 52 Earth multiverse era.

Also, with Arrow ending this season, CW has picked up a new DC TV show called Superman and Lois using the CW characters joined by their two sons.

No word on the other DC TV show that is being pitched, and gets a back door pilot next week in Arrow, Green Arrow and the Canaries. 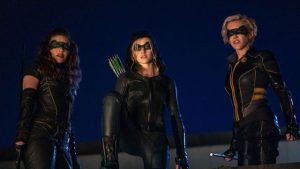 Although, they seem confident since the series has a spin-off comic book too.

Speaking of spin-off comic books, there is a net new story tied into the CW Crisis on Infinite Earths in a Giant Size comic out this book that also features key reprints of related DC stories.

All the other CW DC TV shows have been renewed for new seasons: Flash and Black Lighting…

We end with a few words from Green Arrow.

A good way and time to go.

8 seasons and an entire Universe seems like a pretty good time to step away.