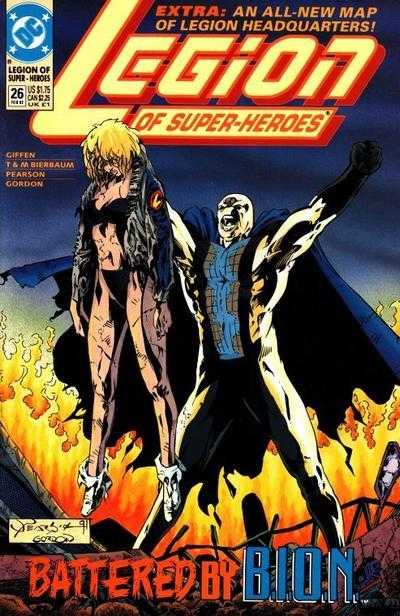 The first twenty-five issues of this series are among my most treasured and favoured comics, but I felt that this title got even better during the run of issues I’m going to be writing about in this column.

The Legion has more or less returned to a vastly different universe, where the United Planets suffer as many challenges as the Legionnaires do.  The Earth has been secretly taken over by the Dominators, and then devastated in a series of explosions sparked off by the destruction of the Moon.  Cells of rebels, including ones run by former Legion foe Universo, and former Legionnaire Jacques Foccart, comprised mostly of former members of the Legion of Substitute Heroes, resist the Dominion, with some covert support from the Legion.

In the devastation of the Dominator’s Triple-Strike protocol, Batch SW6, a collection of twenty teenage Legionnaires has escaped. They are either the original Legion, or clones of them, but now they are out in the world, and the Dominion has sent BION, an artificial being based on Computo, to track them down.

Things are bleak as hell when these issues open, as Keith Giffen steps back from providing full pencils, instead laying out pages for the incredible Jason Pearson to draw.

The end of this run was devastating, and I remember it as making me cry when I was fourteen or fifteen.  These are some of the best comics I’ve ever read, and I’m excited to dive back into them, and share them with you.

The Legion of Super-Heroes (Batch SW6)

I decided to end this column with issue thirty-nine, as it was the last that Giffen worked on, and felt like it was wrapping up the story of Earth’s destruction.  At the same time, with Immonen coming on as artist, and the Bierbaums’ taking on the full writer role, it would have also worked as the first issue of the next column.

Reading these comics again for the first time in over twenty years, I am once again blown away by how good they are.  For basically a year, the writing team (led by Giffen) more or less sidelined the book’s main characters, and told a story that focused on the Subs and the SW6 kids, as they worked to remove the Dominion from Earth.  On its surface, that sounds very straightforward, but there was just so much going on in these comics that really stood out when read in a short span of time.

I was impressed with the way that so many of the characters, some of whom had never been more than a joke before this, were given the space to develop and grow.  We saw people like Ron-Karr and Dag step up, to say nothing of Staq. We also got to see Jacques mature into a leader with real gravitas.

Among the SW6, who are basically the late-Silver Age Legion, we got to see the kids treated with more maturity than ever before.  Jan, the sole survivor of a planet-wide genocide, is an emotional mess, and that makes sense. Lyle, the character I barely ever got to know as he died so long ago, emerged as one of the best leaders the Legion ever had.  The writers dropped hints about Violet being unsure of her sexuality even back then, and had her working over time to prove that she was interested in Devlin, who himself moved from being a jokey Jimmy Olsen character to being taken seriously.

The plotting of this Terra Mosaic arc was meticulous.  Early into their stay in the chambers, the Sub’s Ron-Karr found the proton jelly that would end up being responsible for the destruction of the planet.  We saw the Emerald Eye collecting people long before we learned that Leland McCauley commanded it now. The slow progression of the Dominator plotline was suspenseful, right up to the point that things turned into open warfare.  Pinnacle Command, instead of correcting the mistakes of the ambassador, pushed things to the brink, and ultimately ruined the planet.

I feel like Giffen and the Bierbaums used a remarkable amount of restraint, keeping this story moving at a realistic pace, and balancing so many plot threads and character arcs.  There was just so much going on, with such a massive cast, and yet things never felt rushed or short changed. Sure, there are a few things left unresolved, such as what happened to the group of chamber subjects that SW6 Garth and Imra found (Dragon Mage, Catseye, Crystal Kid, and Danielle Foccart), but just about everything else found resolution, amidst a ton of chaos.  I would like to know what happened with Dawnstar though, and I’m curious to know more about Celeste and her green energy, which did not appear even once during this arc. I’m also curious to know who it was that attacked the Dominator homeworld.

And then there’s the scope of this story in terms of its willingness to break things.  Before this arc, we saw the Moon destroyed, and with it large areas of the Earth’s surface.  Then, after leaving the chambers, Grinn detonated them all, causing much more destruction. The war between the UP and the Dominators, as well as the general uprising across the Earth, wrecked even more stuff.  We were left with an idea of how bad things were, but because this was comics, we were expecting things to get better. Instead, with no real warning, Giffen and the Bierbaums blew up the entire planet. Issue thirty-eight is among the most emotionally devastating comics I’ve ever read, and their decision to tell the story through Devlin’s article was a masterful one.

The thing is, I think that perhaps the Sun Boy solo issue, number twenty-eight, was even more effective.  I love the way in which they deconstructed Dirk’s character, looking back at his previous loutish behaviour, and portraying it as a consequence of his father’s disdain for him as a child.  It all made a lot of sense, and caused me to begin to feel sorry for one of the few Legionnaire’s I didn’t previously care for all that much.

Likewise, the issue focusing on Sean Erin, who we knew before as Shvaughn, was a revelation.  Prior to that issue, I think the extent of my exposure to trans characters was in Vertigo comics (I don’t think that Invisibles was around by this point, but I might be wrong), and I saw them as the necessary trapping of being on the edge of storytelling, but not as actual characters.  I felt like I knew Shvaughn from her days as Jan’s girlfriend, as Legion liaison, and as someone often shown just hanging out with her best friend Gigi Cusimano.  She’d been a bit of a stock character, but one I had an affection for. Now, seeing her this way as her medication wore off, and her body regressed to its original, male, form, I remember feeling sympathy, and being a little surprised by how nonchalant Jan’s reaction was.  Reading it now, being older and wiser (or so I like to think), it didn’t surprise me at all, but deepened my respect for Jan. That story was handled with a lot of sensitivity, and worked remarkably well against the backdrop of all the chaos happening on Earth.

Giffen was, without a doubt, the star of this book, as the issues he didn’t plot lacked a certain quality, but everyone on this book provided stellar work.  The Bierbaums continued to grow as writers, and their reunion story in the Annual remains a favourite of mine, as it felt like coming home again.

Jason Pearson, though, was a revelation.  As he drew over Giffen’s breakdowns, it’s hard to know exactly what was his originally, but as the run continued, we saw him grow and grow as an artist.  His character work was impeccable, and he made some characters (especially Staq) more unique than we’d seen before. He created Sade, who I wish had stuck around longer (I always thought of her when I read Pearson’s Body Bags at Image).  I wish Pearson had stuck with this book, or had gone on to do more comics work than he ultimately did; his stuff was terrific.

I’d like to say a few things about Stuart Immonen, but it probably makes more sense to wait for the next column.  Seeing Colleen Doran and Curt Swan draw over Giffen’s breakdowns, in the same issue, was a treat.

In my last column, I wrote about the organic and collaborative nature of the book, with inkers and colourists receiving some story assist credits (Pearson got some too), and how that all felt natural.  During this run, I think some strain must have developed, which was never clear in the writing, but was revealed in the letters column. This title had a hard time maintaining a consistent editor, and it appears that Giffen’s and Pearson’s departures may have been symptomatic of larger problems.  The original plans for the Legionnaires title were abandoned in favor of putting the SW6 kids in the book. Originally issue thirty-nine was going to be double-sized, but then got split up and rejigged.

At the same time, the Legion line grew to proportions never seen before.  Timber Wolf landed his own miniseries, set in the 20th century (you’ll see that column coming soon), Lar Gand got his own series, set before he ever met the Legion (also coming soon), and the SW6 kids were given their own book, Legionnaires (which, I feel, was partly responsible for the downfall of the Legion I love).

From what I remember, after Giffen left, the Bierbaums kept things going well for a while, but I also remember the quality of the book slipping.  We’re going to be digging into that next time.

These comics have not been collected anywhere, but they really should be.