Protector #2 – I’m very invested in this new series by Simon Roy, Daniel Benson, and the incredible Artyom Trakhanov.  This series is set in the far future, and follows a couple of groups of people who eke out a living in a landscape that has been massively changed by ecological disaster and social upheaval.  A woman, running from slavery, discovered a robot (or something) that, in this issue, appears to have a human consciousness and has no idea how long he’s been shut down. We learn about the religious beliefs of the woman’s culture, and as the Hudsoni people invade, we learn more about their culture.  There’s a lot of backstory to this series that has not been made clear to us yet, and that makes me even more interested. The action sequences are a bit confusing this issue, but that feels intentional. Trakhanov is a fascinating artist, and I love the visual aesthetic of this series. I highly recommend this to anyone who is missing Prophet or Island.

Black Panther #21 – Ta-Nehisi Coates and Ryan Bodenheim go pretty much full Star Wars in this issue, as the Maroons face off against N’Jadaka and his armada in space.  I just took it is as I was going to summarize this issue that T’Challa’s not even in it. It’s weird that I didn’t notice that as I was reading the issue… 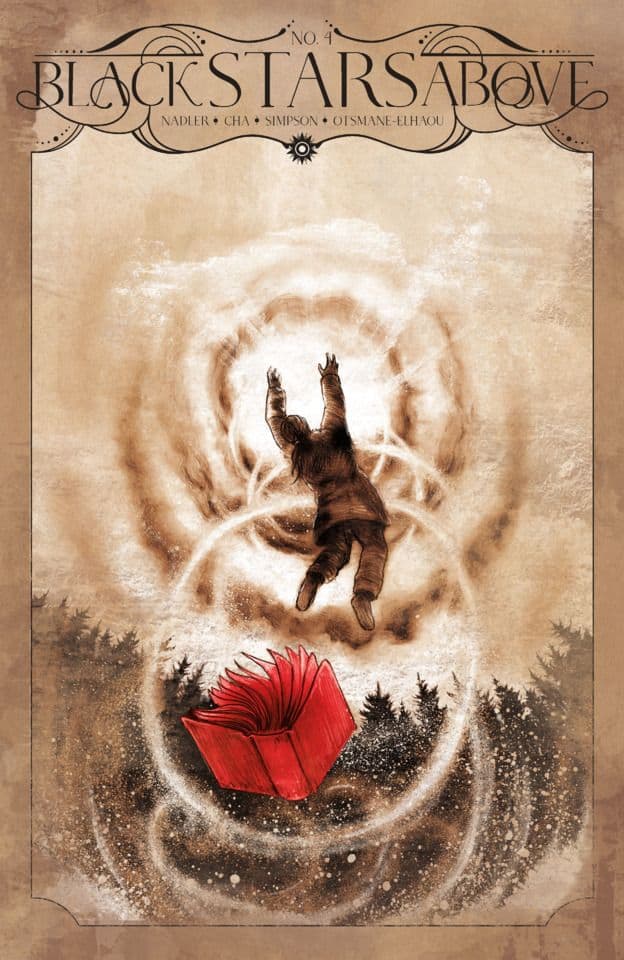 Black Stars Above #4 – Lonnie Nadler’s strange Lovecraftian northern Canadian historical horror story is the kind of thing that sticks with you, and leaves you with a sense of unease.  This issue has Eulalie finally making it to the town north of the woods, after weeks (or is it years?) of wandering in the wilderness, and sure enough, things there are odd. Jenna Cha’s art makes this title’s creepiness real, and I like the way she uses layout to enhance the uncertainty of the story.  I do wish this book had slightly larger fonts though, it makes me feel old…

Giant-Size X-Men: Jean Grey and Emma Frost #1 – When I saw that Jonathan Hickman was going to be giving us regular Giant-Size X-Men one-shots focusing on smaller groups of characters, I was excited, as I figured that this would be a perfect opportunity for him to explore some of the wider implications of his larger X-Men story as they affect individuals, providing for some of the character development that has been missing lately.  When I saw that Jean Grey and Emma Frost were going to share billing in the first one, I was even more excited, as I’m not too sure where these two women stand with regards to one another anymore. This was not that. Instead, we got a very lovely (thanks to Russell Dauterman) homage to the Morrison/Quitely ‘Nuff Said silent issue of a twenty years ago. Jean and Emma enter Storm’s mind after something has brought her down, and spend most of the issue battling entities in her mind, in uniquely laid out and constructed settings.  I don’t come away from this book with any greater understanding of how Emma and Jean feel about each other or life on Krakoa, but because of Dauterman’s art, I still enjoyed this. I just hope that future one-shots have more substance to them, as this story could have easily been a regular-sized issue, or even a backup story.

Invisible Kingdom #10 – The second arc of this excellent science fiction series comes to a close, as the crew of the Sundog find themselves confronted by both the pirates they’ve just escaped, and a massive Lux warship.  Grix is running out of options quickly, but also finds time to also have a very important talk with Vess, who is undergoing a biological change fixated on Grix. G. Willow Wilson and Christian Ward have made this one of my favourite series, and it’s a shame that I’ll have to wait until June to see the start of the final arc.  I can’t recommend this series enough, it’s really very good.

New Mutants #8 – Ed Brisson is back, with an artist I don’t know (how quickly the X-Books get to be proving grounds these days, no offense to Marco Failla, who does a fine job), as Armor, Boom-Boom, and Magma travel to Brazil.  I don’t buy that any of these characters would be going anywhere together, as they aren’t really friends. The story is alright, but not terribly memorable. Local mutants are being hunted by creatures when they try to access a Krakoan gate that is randomly in a clearing in the Amazon rainforest.  The best part of the issue has Sebastian Shaw dealing with the drug cartel that featured in Brisson’s earlier issues. This series, as it switches from Jonathan Hickman and Rod Reis to Brisson and whoever every few issues, is kind of a disjointed mess that doesn’t seem to have any kind of plan to it.

Sex Criminals #27 – I feel conflicted about where this series has landed.  While I still enjoy the banter between Suze and Jon (there’s a lot of nude body markering in this issue), either I or Matt Fraction have kind of lost the plot.  Increasingly, I don’t really care about what’s happening in this book, and am sticking around out of affection for the characters, and for the letters’ page (although this one feels a little phoned-in).  At least this is the last arc…

Star Wars #3 – Lando sneaks himself, Leia, and Luke back onto Cloud City, with each of them focusing on a particular reason for being there.  Charles Soule captures the rushed excitement of the films, and has a great handle on these characters. Jesus Saiz is doing some of the most beautiful work of his career.  I like that this new Imperial, Commander Zahra, is being developed as an interesting foe for the regular crew.

X-Force #8 – X-Force keeps getting stronger, and I think that’s because it’s choosing to focus more and more on Domino.  She recruits Sage and Colossus to help her track down what is being done with her DNA, which leads to a cool train fighting scenario.  Like this week’s issue of X-Men, there’s a big focus on what happens when mutants die and are reborn, but I feel like Ben Percy has a different approach to that topic.

X-Men #7 – Jonathan Hickman continues to explore Krakoa and the new mutant society that is making it their home.  In this issue, Cyclops and Nightcrawler spend almost the entire issue debating the Crucible, a new aspect of Krakoan culture that addresses the number of former mutants still left powerless after the Scarlet Witch’s “No more mutants” declaration of years ago.  There is a way to fix this problem, but it has been devised by people like Apocalypse and Exodus, so you have to question, as Kurt does, if it’s a good idea. There have been so many changes to the status quo brought about by Hickman’s take over, and I’m pleased to see that they are being explored in this thoughtful way.  I do still wish there was more of a throughline in the bigger picture, as things continue to feel very fragmented, but I remain curious and invested in all of this. I liked this issue a lot more than I did the Giant-Size one above.

X-Men/Fantastic Four #2 – Marvel’s two biggest families are at each other’s throats.  The Fantastic Four believe that the X-Men may have kidnapped their children, while the X-Men do little to smooth things over.  The conflict is indicative of how Krakoa may be responded to around the world, while Doctor Doom actually has Franklin and Valeria, as well as Kate Pryde’s Marauders squad.  I feel like Chip Zdarsky is working hard to explore how people in the real world would react to the mutant situation, and he keeps the story moving. Doctor Doom’s appearance doesn’t fit with what is going on in his own series, but this stays interesting.  The Dodsons’ artwork is lovely, and a little more to my liking in this issue than it usually is. 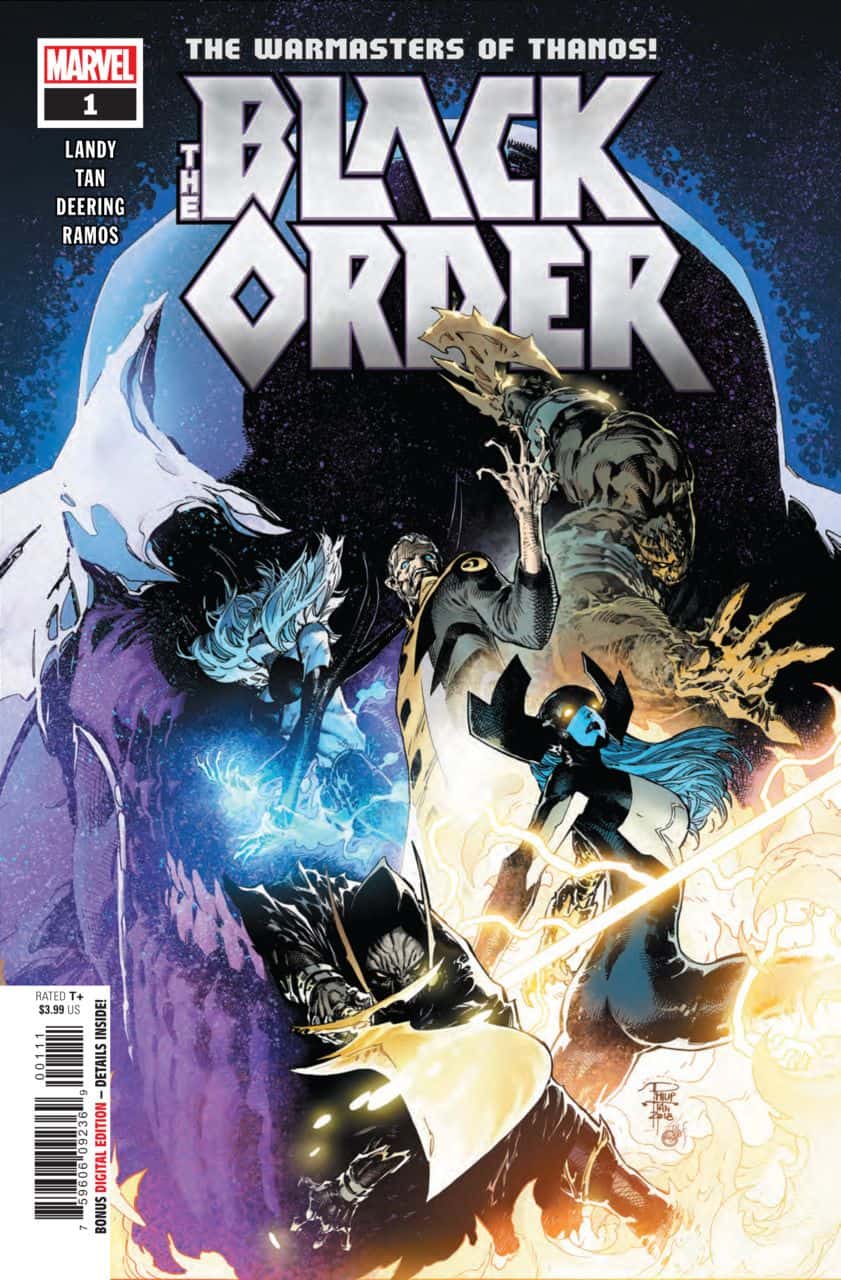 The Black Order #1-5 – I shouldn’t have expected much from this series about Thanos’s henchmen, but the art, by a variety of people including Philip Tan and Carlos Magno, is pretty nice.  These characters, with the exception of the Black Swan, are kind of dumb.