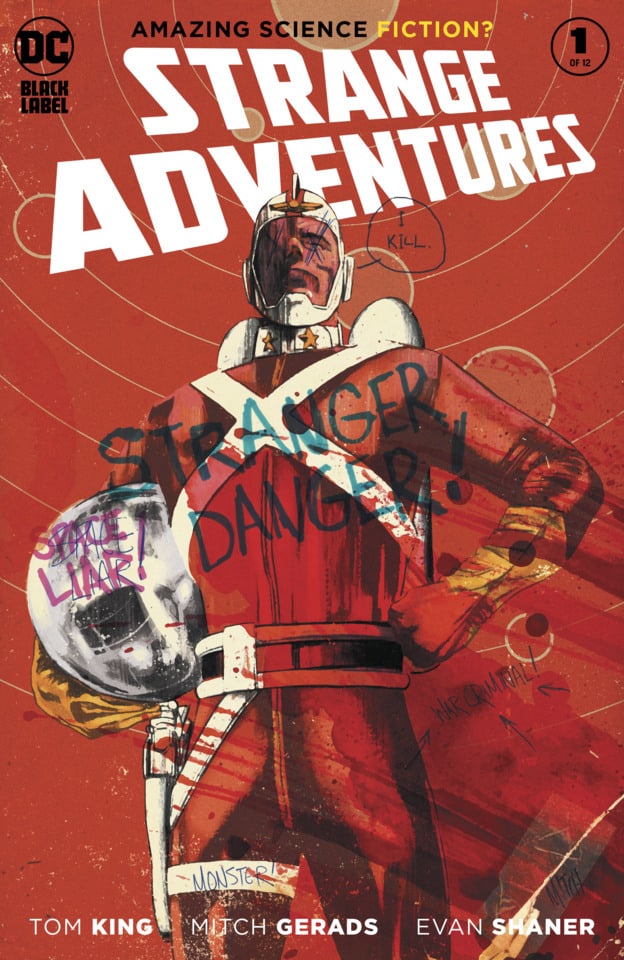 Strange Adventures #1 – I’d been looking forward to this series since it was announced.  Sooner, actually, as I was excited to see what series Tom King and Mitch Gerads were going to collaborate on next, after Mister Miracle ended.  This team is as strong as any working in comics, and they’ve added Doc Shaner to the mix for this new series, which focuses on Adam Strange. It seems that Strange and his wife, Alanna, have moved to Earth after Strange fought to save the planet Rann from a race called the Pykkts.  Now, Strange has written a book, and is being feted across America for his service and sacrifice, appearing on talk shows, and receiving medals from the White House. One person feels differently though, and goes viral when he interrupts a signing at a store. Later, this man turns up dead, and questions are raised about whether or not Strange may have been involved.  It’s easy to immediately start looking at parallels to Mister Miracle – both characters are married and parents, and are dealing with trauma. This issue ends with a quote from artist Carmine Infantino, discussing the layers he built into his depiction of Rann. That seems emblematic of where the series is going, as Shaner draws the scenes on Rann that show the fight against the Pykkts, while Gerads gives us the more everyday view of life on Earth.  King is a structuralist in his approach to stories like this, and it’s clear that he’s holding a lot of surprises back from us this early in the series. The whole thing looks fantastic, and I like the longer page count. There are way too many ads interrupting the flow of the story here in a way that is much more obtrusive than I’m used to seeing, but overall, I’m coming away from this first issue excited to see what King has planned for us. I’ve never been an Adam Strange fan (I’ve always found his Buck Rogers-ish story kind of dull, and I hate Sardath), but this definitely has me intrigued, especially as it appears to be about living in a post-truth world.  I’m very happy that we get a year to explore this story. 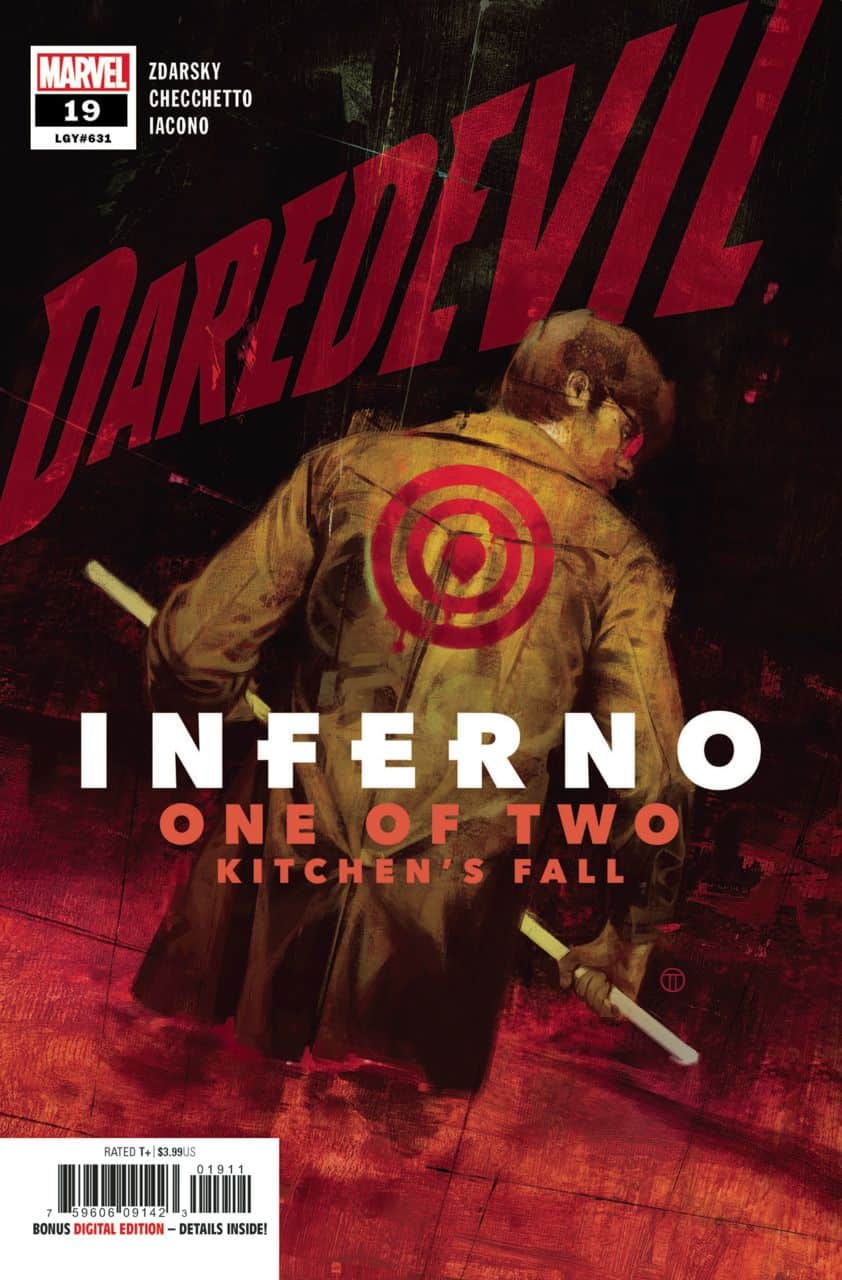 Daredevil #19 – There’s a pile of mercenaries (including classic DD villain Bullet!) running wild in Hell’s Kitchen, and the only people trying to do anything about it are locals wearing Daredevil masks.  Matt has to get involved, and it’s clear that Daredevil will be returning. Also returning is another classic character from the Nocenti/Romita Jr. era of this title, who I was very happy to see. I’ve really liked what Chip Zdarsky has been doing with this comic, and while I like Marco Checchetto’s art here, I do miss Jorge Fornas’s work from the last few issues.

Doctor Doom #6 – Doom and Kang are tramping across Texas in this issue.  Let the weirdness of that sentence sink in a little. Christopher Cantwell is doing some strange things with this title, which has Doom fighting to recover his kingdom, and to claim a vision of the future that might not come to pass.  It’s a very original take on the character, set in a corner of the Marvel Universe that is populated with heroes and villains we don’t see very often. I’m glad that I decided to support this series, as it’s full of nice surprises, although I wish Salvador Larroca would put Doom back in his more traditional armor.  I love that Kang shows up so often – I’ve always loved his ridiculous design. 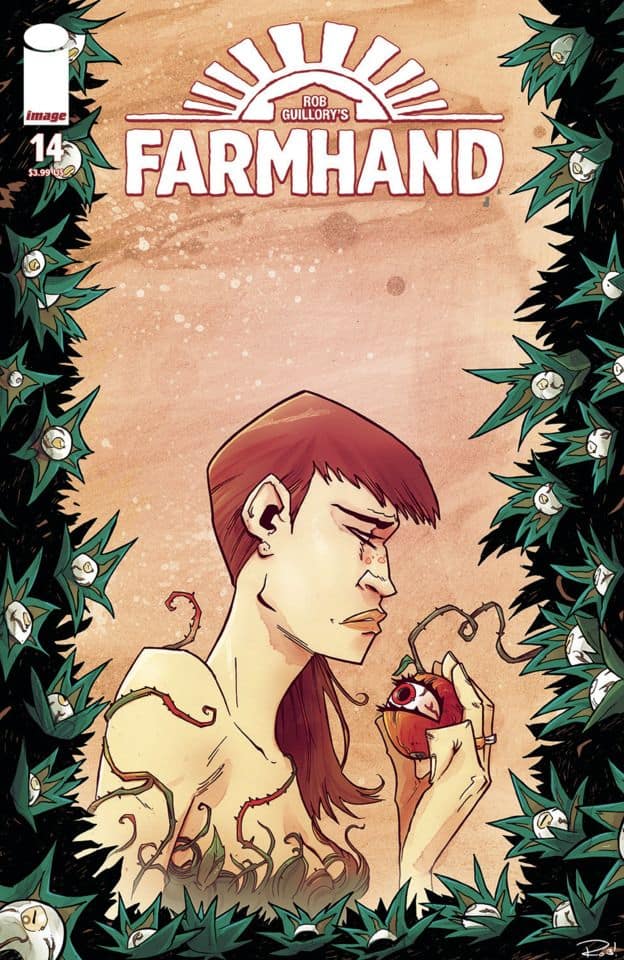 Farmhand #14 – We dig ever deeper into some of the truths that have been hidden so far.  We learn what’s going on with Thorne, who seems to be able to control everyone who has ever accepted a transplant from Jed, as Ezekiel confronts the Russian child assassin his son has been hanging out with, and we discover the truth behind the frequently invisible dog-like creature that has been helping Riley.  When Rob Guillory started this series, it appeared to be a family drama set against the backdrop of a very strange science fiction farm, but we’ve been moving more into body horror territory, and I love it.  This is a very unique, and hard to describe, series.

Marauders #9 – In a lot of ways, Marauders has become the most consistent X-title.  This issue has Emma and the others dealing with the Homines Virendi operative that is riding around Fantastic Voyage-ing it in Pyro’s bloodstream, in a very Emma Frost way.  The Kate Pryde story is moving kind of slowly, but I find myself enjoying this book, and Matteo Lolli’s very fine art.

Miles Morales: Spider-Man #16 – Miles has to babysit his sister, but of course runs into some trouble in the first half of this issue, while the second half has his uncle meeting with Ultimatum.  This is kind of a placeholder issue, as Saladin Ahmed sets up the coming confrontation between Miles and Ultimatum. It’s a solid issue, with acceptable art by Cory Smith, although I think he draws Miles as looking a little too old.  I like this book, and am worried that this Outlawed event across the younger hero titles is going to derail it a little. I fully have event fatigue now.

Nobody Is In Control #4 – I wasn’t sure we’d ever see the end of this series, either because of Black Mask’s ongoing difficulties with publishing comics they’ve solicited, or because the government would suppress this book for revealing too many secrets.  That is a bit of a joke, that would make sense to anyone who’s been reading it. Our two fugitives, one an escapee from a military base with a head full of secrets and a briefcase, and the other the retired radio jockey who has kind of ended up being his hostage, continue to evade the military in the woods, but like all chases like this, they don’t succeed.  This was an interesting book by writer Patrick Kindlon, with creative art by Paul Tucker. It’s a very Black Mask book – Kindlon’s work at Aftershock hasn’t been as good, but it does come out more often. If they ever get around to publishing the trade, I think it would appeal to a lot of people who find our post-truth world fascinating.

Outer Darkness/Chew #1 – Outer Darkness, by John Layman and Afu Chan, was one of my favourite series of the last couple of years (season two is starting soon).  Chew, by Layman and Rob Guillory, was a favourite comic of mine for years. Layman figured out a way to combine the two titles – one a Star Trek-like story, where everyone on the Enterprise is a complete and total asshole, and the universe full of malevolent spirits; the other about people who gain strange super powers through food.  Tony Chu and his partner John Colby are brought to the future to help Captain Rigg and the crew of the Charon negotiate a treaty with a race that communicates through food. Both Chan and Guillory provide art for the sections set in their respective universes, and the book comes with a strong sense of nostalgia for Chew, and full of the possibilities of the Outer Darkness universe.  It’s a fun read.

Black Panther and the Agents of Wakanda #7

Victor LaValle’s Destroyer – I really enjoyed this book, by author Victor LaValle and artist Dietrich Smith.  In it, LaValle plays with the Frankenstein story, but putting the focus on a grieving genius mother who developed Frankenstein-like technology to bring her son back from the dead after he was shot by a police officer for, basically, being black.  The woman, Josephine, once worked for a secret lab until she chose to keep her unborn child, even though that meant leaving the child’s father as well. The Director of her lab has wanted her back, and finally, after thirteen years, locates her. The problem is, the Frankenstein monster, which is real, also figures out where she is.  LaValle does a great job of weaving the problems of modern America into this story, and delivers a tale that looks at two types of horror. Dietrich Smith’s art is very nice.