Retro Review: Legionnaires #1-18 By The Bierbaums, Sprouse, Hughes & Others For DC Comics! 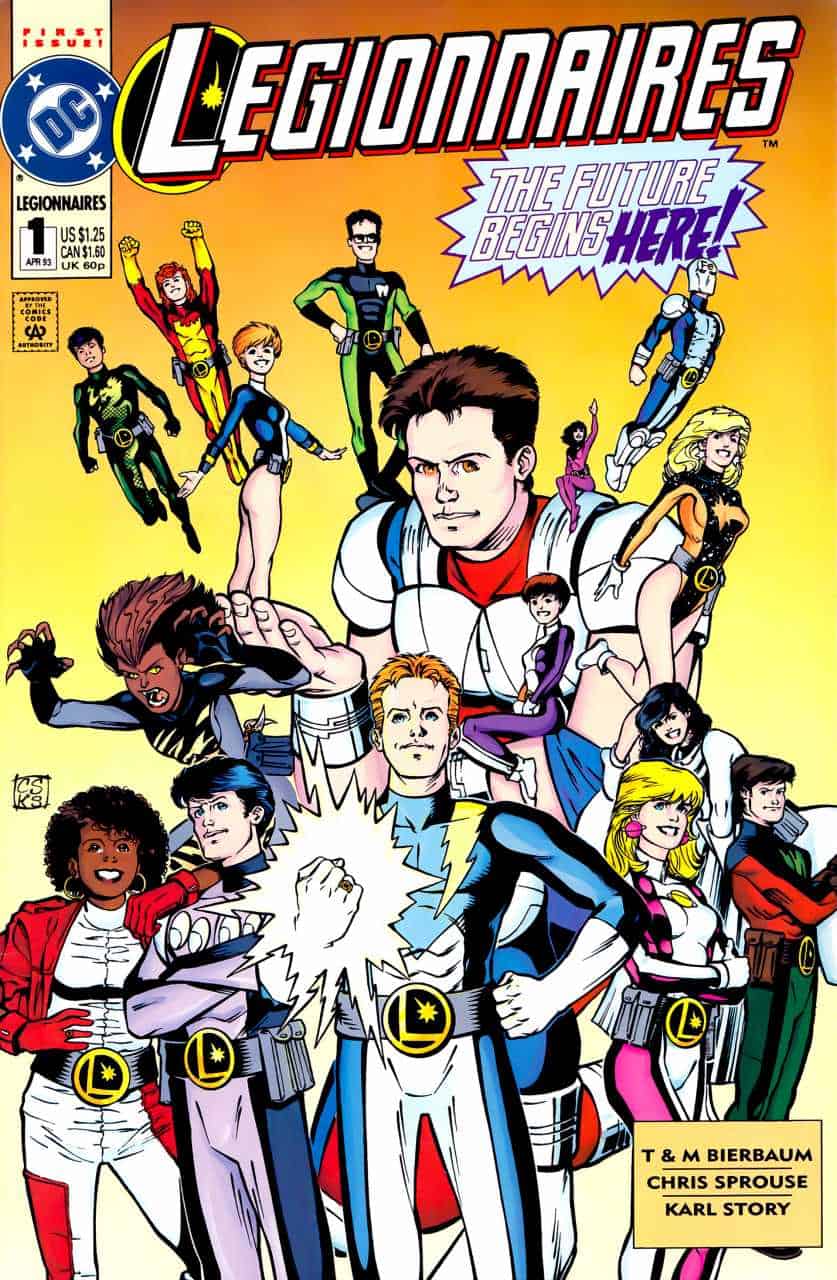 Keith Giffen and Tom and Mary Bierbaum’s run on Legion of Super-Heroes (the fourth volume of that series) will probably stand forever as one of my all-time favourite runs of any superhero comic.  During their run, they introduced Batch SW6, a group of twenty teenage Legionnaires that were being held in a set of cocoons in a Dominator chamber under Metropolis. These Legionnaires had their minds and powers intact, and believe that they had come straight from 2977.  They joined the Earth’s Resistance, and the adult Legion, in helping free Earth from Dominator rule, although shortly after their victory, the Earth blew up.

Amidst all the destruction, just under 100 domed cities made it off the planet, and as this series opens, the Legionnaires, with some new members, new costumes, and new codenames, set themselves up as the heroes of New Earth under the tutelage of the adult Chameleon Boy.

There was a lot of speculation as to who were the original Legionnaires and who were clones, with general consensus being that Giffen wanted the SW6 to be the real McCoys, and the Legion we’d been reading for years being clones.  All of that became rather immaterial after Giffen left, and this book, a companion to the Legion of Super-Heroes, was launched.

Originally, this title was intended to chronicle the revamped early adventures of the Legion, but instead, the decision was made to focus on the SW6 kids.  From what I remember, the tone of this book was more innocent and hero-focused, while the adult title stayed more, well, adult. I remember enjoying Chris Sprouse’s art, and the more optimistic tone this title took, but much of it is hazy now, especially after the events of Zero Hour erased this whole status quo, but kept many of the same uniforms.

I know that without Keith Giffen, both titles were not as strong as what preceded them, but I don’t think they were bad.  I’m looking forward to reacquainting myself with this different take on the classic characters.

While there are two chapters left in End of an Era, that’s the last we see “our” Legionnaires in this title, before everything gets rebooted coming out of Zero Hour.

I think that, before looping back to the Zero Hour stuff, it’s important to talk about the first fifteen issues of this series.  Tom and Mary Bierbaum originally intended, when Keith Giffen was still around, to chronicle the earlier adventures of the Legion in this title, reflecting the changes they made to the team’s timeline in the parent book right at the beginning of their lauded run.  As plans changed, and the SW6 Legion (the clones of the original Legion that the Dominion grew and who got free during the war on Earth) went its separate way from the Legion, this book became theirs. They were rebranded as the Legionnaires, given new uniforms and many new codenames, as well as some new members, and New Earth to protect.

The series started well, with a solid Fatal Five story that helped to establish the Legionnaires as the champions of New Earth, while also refreshing the Five.  From there, the Bierbaums kept dividing the team and giving them missions or plotlines that ran for many issues, dragging out simple stories much longer than they needed to run, as they were given only a third of each issue or so.  How long did it take for Cosmic Boy to get over being hit by lightning? I think it was six months of comics, which is a little too long.

I understand that DC and the Bierbaums wanted this title to appeal to a larger audience than the LSH title was at the time, and so they made it more accessible to new and younger readers.  Gone was the complicated Legion history, although we still had the familiar characters that readers had cared about for decades. The problem is, the sense of continuity that came with reading a Legion book was also gone.  The heroes seem like rookies a lot of the time, but before they were cloned, or cocooned, or whatever happened to them, they’d been working together as a team for years. It’s just that we never got the sense that any of their earlier adventures had happened to them.  The timeline of who joined the team when got confusing, as Star Boy, Kid Quantum, Dream Girl, and Bouncing Boy all joined before Projectra (who died in the war), but didn’t get SW6ed (although, to be fair, Kid Quantum was believed dead at the time). Aside from the relationships between Jo and Tinya, and Imra and Garth, it felt like some of these characters were just now getting to know one another, or at least didn’t have a long friendship.

When we got to know the SW6 kids during the war, some of them had a lot of character development done, that was either ignored in this title, or completely wiped away.  Lyle, the Invisible Kid, was the leader during the war, and someone that everyone appeared to look up to. In this book, though, he seems to be ignored, and has absolutely no character work done on him.

Likewise, Jan, aka Alchemist, was shown in LSH to be an incredibly sensitive and caring kid who was processing his PTSD (his entire race was killed by Roxxas).  In this title, when he showed up, he was kind of generic and not all that interesting.

Dirk Morgna, Inferno, was perhaps the most interesting SW6 kid at first.  He saw his adult counterpart, who betrayed the Earth to the Dominion because he sought fame and adulation, become utterly reviled, and then, after being badly burned, beg to die.  It made no sense that he would now be a bully and womanizer, worse than his older self ever was. Had there been even one scene where we saw this as a coping mechanism, I might feel differently, but no, instead, Dirk was a jerk from day one.  He did get a bit of redemption when he called out Baron St. Maixent (more on that) for his xenophobia, but it was not enough.

Like Dirk, Garth, aka Live Wire, was also a real piece of work in this series.  He has a long-standing relationship with Imra, yet he’s quick to flirt with girls at the Legion try-out.  At the same time, he’s now intensely jealous of any time that Imra spends with Rokk? It doesn’t fit with any earlier portrayals of this character.  And then, there’s the whole Proty question. It was established that the adult Garth was really a Protean posing as Garth, after his death in the Silver Age, before the SW6 stuff would have happened.  So, does it not stand to reason that this Garth would also be a Protean, especially since he emerged from the Dominator chambers with his missing arm regrown? And, seeing as it was the Bierbaums that revealed that fact about Adult Garth, it’s not like they wouldn’t have thought about it here.

There were a few new Legionnaires added to the mix, but they never contributed much at all.  Catspaw is barely in the book, which is fine with me because she’s annoying. Computo just seemed to man the monitor board all the time, making her little better than the team’s tech support.  It would have been interesting to see her take on a larger role, especially since she was actually from this time, unlike her teammates who were all from an earlier era (come to think of it, it’s strange that they didn’t spend more time adjusting to their new reality).  Dragonmage showed perhaps the most potential, with his ambiguous powers and connection to magic, but he wasn’t really given any space to shine.

I also thought it was odd that Cham, calling himself Chameleon for some reason, would join the team as their adult liaison, but in no time appear as youthful and immature as the others.  Prior to joining them, Cham was running the adult team, and before that, was in charge of Brande Industries. Giffen’s run had shown him to be a very considered and deliberate person, but that was all gone here.  It was also strange that the Bierbaums shoehorned Kid Quantum (the Legionnaire that they retconned onto the team as the first to die in team history, then brought back in the LSH title) onto this team. The kids seemed familiar with him, but didn’t appear to really know him, which I found odd.

Even with all of these problems, inconsistencies, and I guess unfortunate choices, I was finding a lot of stuff to like with this title, in terms of story and art.  I think that the plans surrounding Zero Hour didn’t give this comic enough room to grow, but also suspect that its hard deadline prevented the Bierbaums from telling more stories.  I think that might be why some plots felt dragged out, while others were just never resolved.

Back in the main Legion title, it was established that Leland McCauley was planning on using his omnicoms (think of future ipads) to take over the Earth, but when we saw him here, he was a germaphobe whose Fatal Five fell apart, never to be seen again.  Similarly, we didn’t get to find out what was up with Cera Kesh, the new Emerald Empress, which was too bad, as I liked her. We also never got any resolution on the stories involving St. Maixent (the xenophobic populist ruler of Paris), or who was stalking Inferno.

I think I’m going to have a lot more to say about Zero Hour in the main Legion column that I’ll be releasing shortly after this one.  I still think that it, and the various attempts to “fix” the Legion that followed were unnecessary, and I am sad that this time I got to spend, reading some fifteen or sixteen years worth of “my” Legion comics is coming to a close.

I did want to take a bit of time to talk about the art in these comics.  Chris Sprouse has always been great, and he brought a real youthfulness to the team, with their exaggeratedly large eyes.  I loved the new costumes that the team had, and the more unified look that they brought to the kids. Adam Hughes issues and pages were great too, as were many of the guest artists (Jeffrey Moy would return after the reboot).

Chris Gardner’s issues are interesting.  He does not appear to have had a very extensive career (only nine credits show up on Comic Vine, four of which were in this comic), but I think he showed a lot of promise.  If you were to blend Chris Sprouse with Rob Liefeld, Gardner is what you would get, which is a lot better than most of the rest of 1994.

After the reboot, LSH and Legionnaires were effectively one title, as the story jumped from one series to the next.  I’m going to cover both titles in the same column, although I don’t promise I’m going to stay interested long enough to get through to the end.  Maybe that’s not fair though – I do remember liking some aspects of these books. I guess we’ll find out next time!

This run was never collected in trade, so you’d have to do some digging to read these issues.